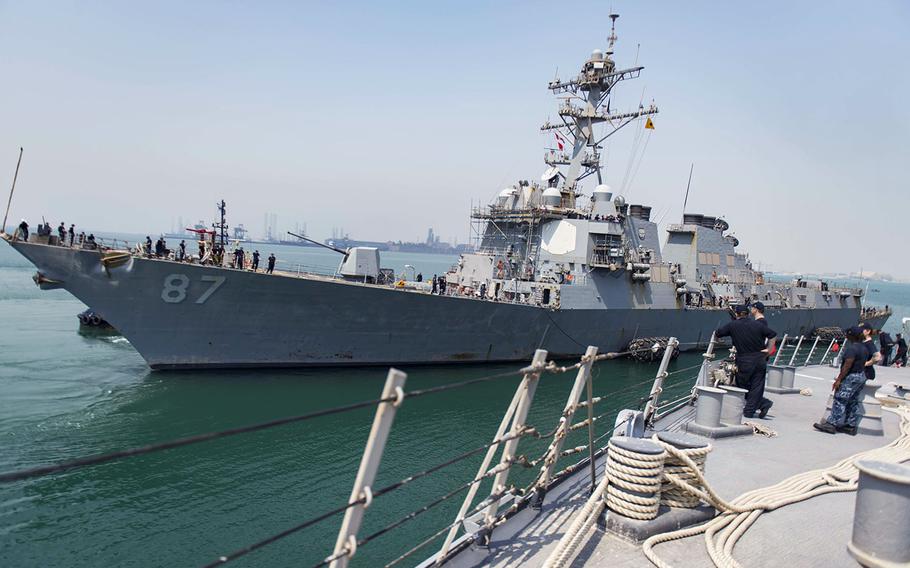 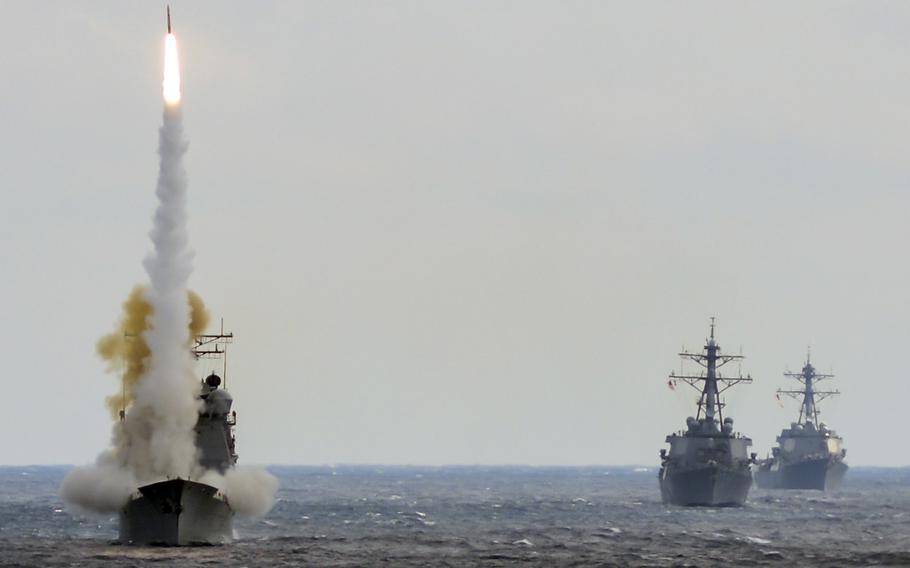 In a March, 2016 file photo, the guided-missile cruiser USS Monterey launches a Standard Missile-2 to destroy an advanced high-speed target while USS Stout and USS Mason transit formation during a live-fire test of the ship's Aegis weapons systems in the Atlantic Ocean. The Aegis system is credited with helping stop an attack on the Mason on Oct. 12, 2016 off Yemen. (Andrae L. Johnson/U.S. Navy)

WASHINGTON – In about 90 seconds Wednesday, the Navy’s Aegis Combat System proved its value and saved the USS Mason from a missile strike.

During the attack, the ship’s defense system detected, tracked and intercepted the incoming cruise missile and destroyed it, two Pentagon officials told Stars and Stripes on the condition of anonymity.

“We actually saw an explosion,” one official said, relaying what has been reported to the Pentagon from the Mason.

The incident took place about 6 p.m. local time Wednesday off the coast of Yemen, where the Mason and the USS San Antonio, an amphibious transport dock ship, were cruising the Bab el Mandeb strait, a narrow waterway that connects the Red Sea to the Gulf Aden.

Since March 2015, Yemen has been controlled by Iranian-backed Houthi rebels who are fighting a Saudi-led coalition getting logistical assistance from the United States.

Subsequently, the strait had seen several strikes during the last two weeks.

On Oct. 1, a HSV-2 Swift, a catamaran-like fast moving littoral ship owned by the United States and leased by the United Arab Emirates, was badly damaged by a cruise missile fired from Yemen.

On Saturday, an airstrike killed at least 140 civilians and wounded hundreds more at a funeral in Sanaa, Yemen’s Houthi-controlled capital. Saudi Arabia denied responsibility for the strike. Pentagon Press Secretary Peter Cook said Thursday that the United States did not assist in Saturday’s funeral strike.

On Sunday, the Mason was again cruising the strait when its defense system detected two cruise missiles fired from a Houthi-controlled coastal area of Yemen, Pentagon officials said Wednesday.

On Wednesday, during the second attack on the Mason, the Aegis system detected and tracked the missile and the ship’s crew responded and destroyed it, the officials said.

In general terms, as soon as radar identifies an object moving toward the ship as an inbound missile, the Aegis system provides options to the ship commander.

“You have about 90 seconds from saying ‘yes, that’s a missile,” and launching a response, one of the officials told Stripes.

The cruise missile was about 8 miles away from the Mason when it was destroyed Wednesday, the official said.

The effectiveness of Aegis on Wednesday provided a battle test for the defense system, proving it can defend ships, the official said.

“There’s a lot more faith, a lot more confidence in the ability of Aegis,” he said.