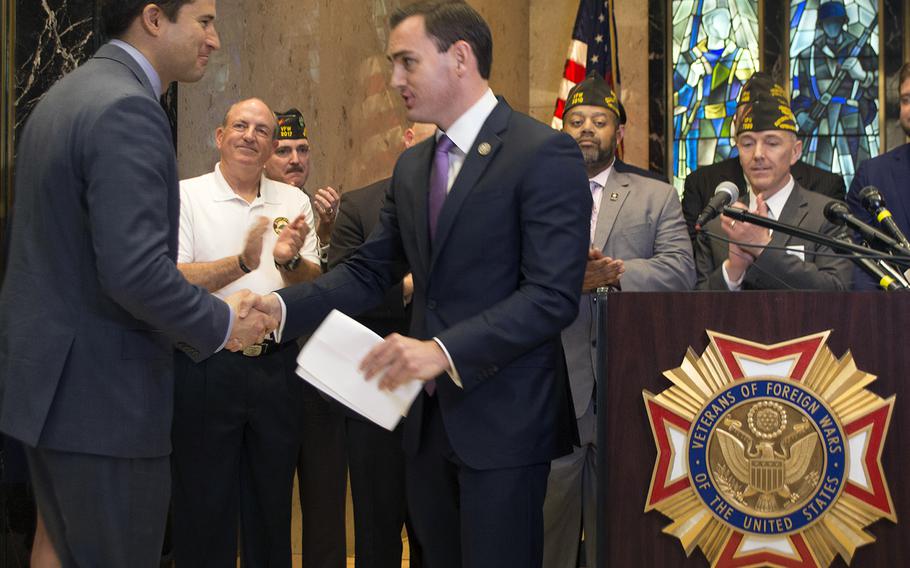 WASHINGTON – The Vietnam Veterans Memorial has long been the inspiration for Andrew Brennan to establish a national memorial to honor the men and women who served in the ongoing Global War on Terror, which he envisions as a place for veterans to gather and remember their friends and for others to learn about the war’s costs.

“In the 35 years since the [Vietnam] Wall was dedicated, the Vietnam generation has seen healing related to that memorial,” said Brennan, a 32-year-old Afghanistan War veteran and former Army captain. “There’s camaraderie. That wall serves as a solid reminder to our citizenry of the cost of military action.”

To honor them, Brennan created the Global War on Terror Memorial Foundation and now has the help of Jan Scruggs, the man who conceived the idea for the Vietnam Wall and spent seven years struggling to get it built. They got a step closer to their goal Tuesday when Rep. Mike Gallagher, R-Wisc., and Rep. Seth Moulton, D-Mass., introduced legislation to clear the way for a war memorial on the National Mall.

The bill would allow an exception for the Global War on Terror to the law that requires a conflict to be over for 10 years before a national commemorative can be established. Similar legislation stalled in Congress last year. It was introduced by former Rep. Ryan Zinke, R-Mont., a former Navy SEAL who is now Secretary of the Department of Interior, which is responsible for managing the National Mall.

“If we’re going to wait to build it 10 years after, that could be another 100 years. I don’t want to hear it,” Scruggs said. “These veterans deserve it. The country needs it. And the time is right.”

Congress would have to pass the legislation, House Resolution 873, before Brennan and the rest of the foundation could begin the federal process of choosing a location and design.

The foundation would be responsible for fundraising to construct the memorial. Brennan estimated its total cost could be between $25 million and $35 million.

A similar process is ongoing for a national Desert Shield and Desert Storm memorial. Earlier this month, Congress passed a resolution approving a location near the National Mall for the memorial. Congress first approved the creation of that memorial in 2014.

Brennan estimated it could take another five to seven years before his idea for a Global War on Terror memorial to become a reality. So, Congress needs to act now, he said.

“Today, a 40-year-old servicemember that seized the first air field in Kandahar in 2001 is now 56,” Brennan said. “Given that these memorial efforts often take years, we’re in a position today where servicemembers will be senior citizens and taking their grandchildren to see the memorial for the war they fought in.”

He and others warned of a situation similar to that of the National World War II Memorial, which was commemorated in 2004 – 59 years after the war ended and too late for many WWII veterans to see it.

“My grandfather served in World War II, and he never got to come to Washington and see the memorial,” Moulton said. “I want to make sure that’s not the case for War on Terror veterans today. So, we have to get this process started, and that’s what this bill aims to do.”

Moulton and Gallagher – both Marines and Iraq War veterans – announced the bill’s introduction Tuesday at the Washington office of Veterans of Foreign Wars, surrounded by representatives of about a dozen veterans organizations.

Amy Looney, vice president of the Travis Manion Foundation, was there. Her husband, Navy SEAL Lt. Brendan Looney, was killed in a helicopter crash in Afghanistan in 2010.

“The families who were left behind, nothing brings us more comfort than knowing others will never forget,” Looney said. “This memorial will stand as a constant reminder of the brave men and women who gave their lives.”