Adventure at Misawa served up on the rocks 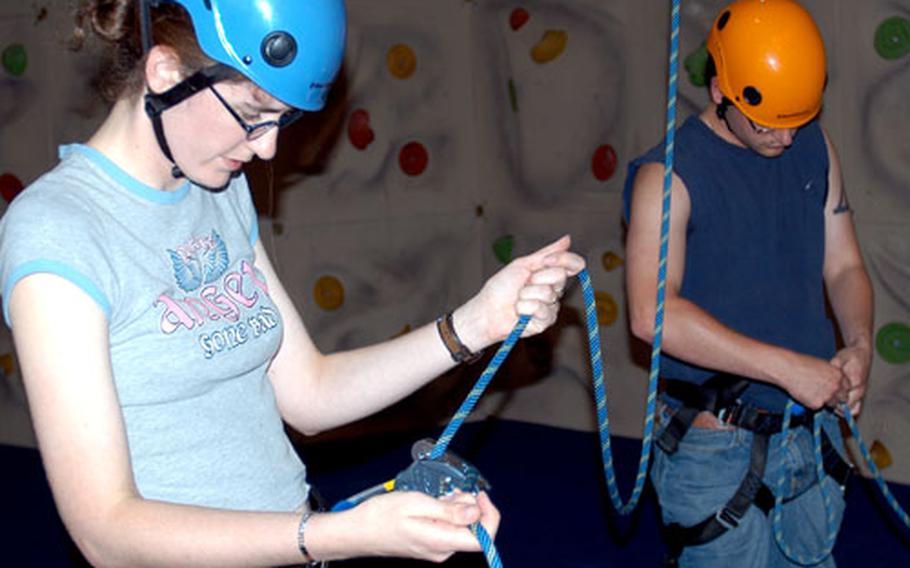 Petty Officer 2nd Class Rebecca Eggleston and Petty Officer 3rd Class Ryan Garcia check their equipment before attempting to belay each other up the climbing wall last week at the Weasel’s Den as part of a rock climbing program. (Courtesy of 35th Services Squadron)

Petty Officer 2nd Class Rebecca Eggleston and Petty Officer 3rd Class Ryan Garcia check their equipment before attempting to belay each other up the climbing wall last week at the Weasel’s Den as part of a rock climbing program. (Courtesy of 35th Services Squadron) 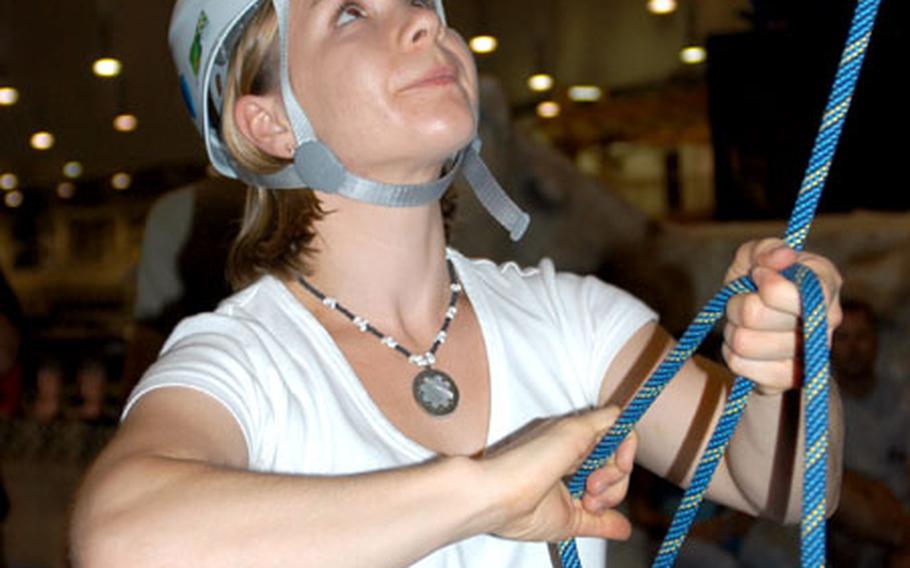 When Petty Officer 2nd Class Rebecca Eggleston deployed to Misawa for six months in June, leaving behind her husband and toddler son at Whidbey Island, Wash., she figured she had two options: mope or make the best of it.

The aviation electrician chose the latter, treating herself to Outdoor Recreation&#8217;s two-session indoor rock climbing clinic at the Weasel&#8217;s Den for her 28th birthday.

Rock climbing is back at Misawa. The program, unveiled this summer, is part of Outdoor Recreation&#8217;s new adventure lineup, which includes mountain biking and more challenging hiking trips.

Dave Hymer, Outdoor Recreation director, said the base offered rock climbing when he was previously at Misawa in the late 90s, &#8220;but it basically went by the wayside.&#8221;

Outdoor Recreation is redeveloping the program, he said, and &#8220;we have this great wall to use as a training aid,&#8221; referring to the 24-foot-high climbing wall in a corner of the Weasel&#8217;s Den.

The wall has drawn several experienced climbers out of the woodwork, Hymer noted, including Chief Petty Officer Ken Putney and Staff Sgt. Jason Enoch, both volunteer instructors at the techniques clinic and on outdoor trips.

Outdoor Recreation is also contracting for three months with lead instructor Lessli Hornung, a pediatrician from Seattle, who is also Putney&#8217;s fianc&#233;.

Hornung has been climbing for more than two years and calls &#8220;the gorge&#8221; in central Washington her favorite climbing spot.

Outdoor Recreation&#8217;s indoor clinic provides a total of four hours of instruction spread over two classes, from 6 to 8 p.m. Tuesday and Thursday. Skills taught include manual belaying, basic climbing techniques, safety, proper communication, knot tying and identifying gear. The course is required for the outdoor rock climbing trips in August, September and October at Tanesashi Seaside and to other sites to be determined.

Climbers have to be at least 16 to do manual belaying in Outdoor Recreation&#8217;s indoor clinic.

Though climbing has unique risks, it can be done safely, Hornung said. &#8220;If you learn the safety techniques and you&#8217;re really diligent about following them, then you can be incredibly safe.&#8221;

Rock climbing, she said, develops arm strength and confidence to scale heights. &#8220;There are people who do it who think they&#8217;re scared of heights, but then they get up there and just love it,&#8221; she said.

Top-rope belaying teaches climbers how to keep their partner from falling, Putney said. Unlike the more advanced lead climbing, where climbers clip in as they ascend a rock face, top-rope belaying involves securing the rope at the top of a cliff before climbing while one&#8217;s partner holds the rope steady from below.

The ultimate reward to learning basic rock climbing techniques, Hornung said, is transferring those skills outdoors. &#8220;When you go outside, there are amazing views of the ocean and beach,&#8221; she said of the Tanesashi cliffs. &#8220;The rocks feels different; that&#8217;s what&#8217;s exhilarating about climbing. There are no pre-marked holes. You have to find your own way to the top.&#8221;