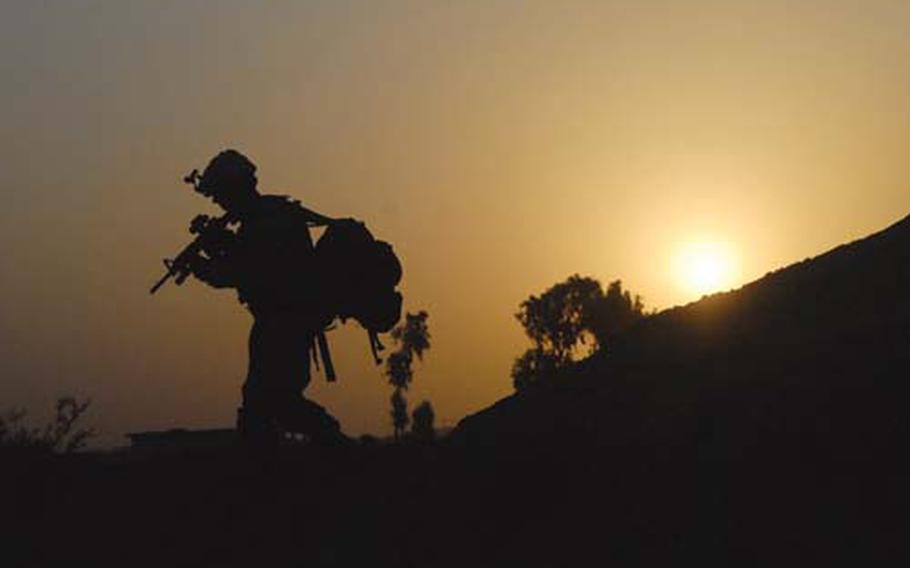 Spc. Hiram Elizondo crosses the steep banks of a canal early Saturday morning while searching fields around Samood, Iraq, for weapons caches. Soldiers with Fox Troop, 2nd Squadron, 3rd Armored Cavalry Regiment awoke at 4 a.m. to start patrolling before the worst of the heat arrived. But even Iraq’s coolest temperatures can be strength-sapping, especially when soldiers must lug all their gear on their backs. (James Warden / S&S)

BALAD RUZ, Iraq &#8212; Iraqi and American soldiers continued to encounter few insurgents Saturday and Sunday as they worked their way through the remaining portions of Diyala province&#8217;s Balad Ruz district and prepared to settle down in the area.

Five battalions embarked on Operation Saber Pursuit on Saturday in order to clear al-Qaida cells from the southern Balad Ruz district. It is the Iraqi government&#8217;s latest push to clear insurgent strongholds. But enemy fighters already knew about it because government leaders, including the prime minister, announced it beforehand.

Second Squadron, 3rd Armored Cavalry Regiment &#8212; one of two American battalions in the operation &#8212; and its Iraqi army partner have so far detained seven suspected insurgents, said Capt. Matthew Shown, the squadron&#8217;s intelligence officer. Only one of those was on the Americans&#8217; blacklist. All have been turned over to the Iraqi army.

Soldiers set fire to reeds clogging local canals to help them spot cache sites more easily. In at least one case, flames ignited a hidden anti-tank mine or roadside bomb and surprised soldiers taking a break nearby. But soldiers have so far found few hidden weapons.

Capt. Patrick Collins, 2/3&#8217;s battle captain, said they&#8217;ve uncovered four anti-tank mines, 10 mortars, two rockets, a rocket-propelled grenade and a roadside bomb in addition to other miscellaneous equipment. Units have also come across several cache sites that appeared to have been recently emptied, another sign that insurgents had prior knowledge of the operation.

The virtual absence of enemy fighters has made casualties nonexistent. Three coalition vehicles hit anti-tank mines, according to Collins.

Shown said no one in the squadron has suffered injuries more severe than a concussion. There have been no firefights.

Heat turned out to be a bigger enemy than al-Qaida. At least one Iraqi army soldier suffered from severe heat injuries. Some American soldiers needed IVs but were able to continue with the mission.

Second Brigade, 1st Armored Division had a similar experience coming into the area from the south, Collins said. They found few insurgents and few weapons caches, although soldiers did discover that one home was rigged to explode after staying in it for several hours.

The brigade also encountered more roadside bombs on the section of a main thoroughfare it had to clear. The bombs delayed units trying to reach a village where soldiers were flown in by helicopter. American soldiers hadn&#8217;t ventured into that area in at least eight months.

"They had it pretty bad," Collins said.

Leaders are now gearing up for the second, perhaps more important, phase of the operation: Holding the area. Iraqi army soldiers will be stationed near the places they&#8217;ve cleared to keep enemy fighters from returning.

Workers have already begun expanding Turki Patrol Base in the south to handle the extra soldiers, Shown said. In the next week or so, the units will begin building several Iraqi Police checkpoints. Iraqi army soldiers will initially man the checkpoints until Iraqi Police can be recruited.

Residents who stayed behind have so far been reluctant to help coalition forces, which Shown said may be because the soldiers left the area immediately after previous operations.

The excuses the villagers made for the almost complete absence of men in the villagers both amused and frustrated Americans searching the homes. Yet Shown said he expects residents to provide more tips on enemy fights and weapons caches when they see the Iraqi army is here for good.

BMPs and other Iraqi armored vehicles not seen before the operation also now guard the main routes around the area. Unlike American armor, though, these Soviet-era vehicles have limited logistics support and are mostly restricted to stationary observation points. They had to be driven into the area by tractor-trailers prior to the operation.

On the second day, though, Fox Troop soldiers had to prod Iraqi army soldiers to clear homes. The Americans grumbled throughout the day that the Iraqis weren&#8217;t doing enough to secure their own country after frequently encountering them sitting in the shade while the Americans searched the houses by themselves.

The soldiers had to live on the dusty cement floors of occupied Iraqi buildings. Temperatures soared into the 120s during the operation. Roadside bombs and logistics difficulties restricted water supplies during the first day of the operation.

Bags of ice sparked a minor celebration when a logistics convoy delivered that small comfort to Fox Troop soldiers staying in a ghost town where al-Qaida had earlier massacred all the residents.

Despite the discomfort, the Joes overcame the jundees and malaise and continued plugging away, even conducting night patrols after a hard day walking in the hot sun. They will work their way through a couple more objectives before concluding the first phase of the operation.

"No matter what situation these guys are in, morale is still high, and we will get the job done," said Spc. Hiram Elizondo, a Fox Troop soldier.

Maj. Gen. Mark Hertling says the Iraqi army will lead an offensive to clamp down on insurgents in Diyala province. He says the U.S. military also will launch a twin operation throughout the north to chase al-Qaida in Iraq from safe havens in remote areas.

Hertling told reporters Sunday the purpose of the offensives is to build on security gains in urban areas of the north.

Similar offensives against Shiite militiamen in Baghdad and southern cities have contributed to a sharp decline in attacks. But violence has been slower to decline in northern Iraq despite several military operations in recent years.

From The Associated Press