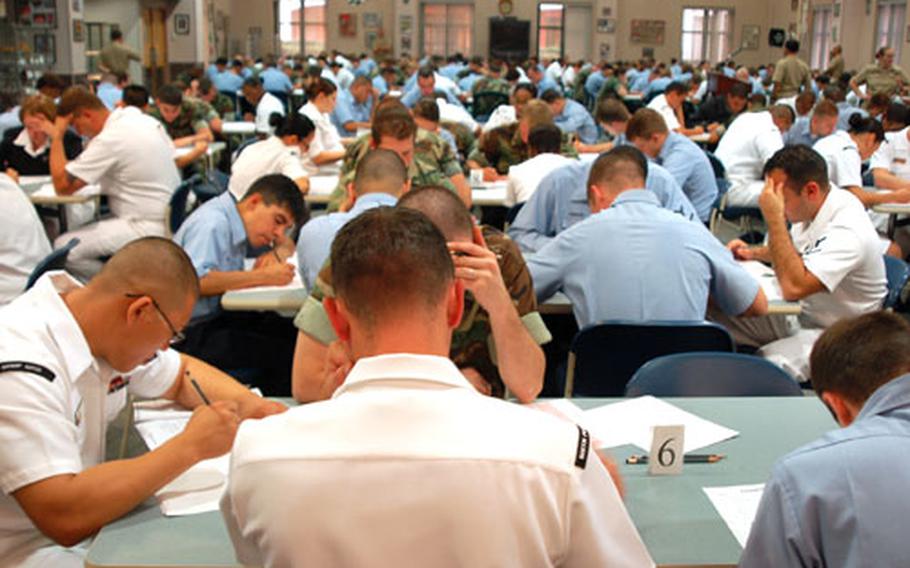 Third-class petty officers take their E-5 advancement exam in September in Naples, Italy. The sailors&#39; answer sheets to the test, which originated in Naples and were bound to Pensacola, Fla., for grading, have been lost in the mail, prompting officials to schedule a make-up exam for Nov. 28. (Steve Woolverton / U.S. Navy)

NAPLES, Italy &#8212; Navy officials broke the news to 251 Naples-based third-class petty officers Wednesday that they have to retake their advancement exams later this month after their initial tests got lost in the mail.

&#8220;I can only tell you personally that I&#8217;m sorry, and we as a system failed you and we need to assume accountability for that,&#8221; Command Master Chief Gustavo Beltra told a gathering of the E-4s at the base theater at Naval Support Activity Naples.

Petty Officer 3rd Class Jeanette Money said she isn&#8217;t as upset that she has to retake the exam as she is concerned that she could become the victim of identity theft, again. The answer sheets &#8212; which were shipped from Naples to Naval Education Training Professional Development Technology Center in Pensacola, Fla. &#8212; contain personal information such as the sailors&#8217; Social Security numbers.

If the answer sheets from September&#8217;s exams don&#8217;t appear in Pensacola, Fla., by Nov. 28, the Naples sailors will have to retake the exam on that day, Beltra said. Once taken, results of the makeup test will count toward advancement, regardless of whether the old ones are found, he said.

In Naples, 251 sailors took Navywide Examination for cycle 192 on Sept. 14 in a bid to advance to E-5. Sailors who moved to Naples after the test date are not impacted. Those who took the test in Naples, but have since moved, will have to contact their local commands to retake the promotion exam.

Answer sheets for the E-4 and E-6 promotion tests from Naples were mailed separately and arrived in Pensacola within five days of the postmark. Though sent by express mail through the military postal service and U.S. Postal Service, which tracks the mail, the last known location of the box of answer sheets was in Naples, said Lt. Joseph Orosco, officer-in-charge of the Personnel Support Detachment at Naples.

Dwelling on the incident won&#8217;t change the sailors&#8217; predicament, Beltra and other command master chiefs said in an attempt to deliver a pep talk. Instead, they encouraged those impacted to focus on what can be done: study.

The timing of the lost answer sheets adds to the sailors&#8217; distress, they lamented.

The makeup test date falls right after Thanksgiving, and in the middle of many sailors&#8217; leave periods. But individual sailors unable to make it to the dining facility on the morning of Nov. 28 should see their command master chiefs for other options, Beltra said. Commands are working to notify sailors now on vacation, so they can spend the next two weeks studying for the makeup test, which will be different from the one they took on Sept. 14.

Which brought up another concern: The impacted sailors have two weeks to study the new &#8220;Bibs&#8221; or bibliographies, instead of the roughly six-month study period they typically have, said Petty Officer 3rd Class Danielle Warmack.

The lost answer sheets will not delay promotions for E-4s across the entire Navy, said Master Chief Petty Officer John Daigrepont, the senior enlisted leader for PSD in Naples.

The Naval Education Training Professional Development Technology Center sets the lowest acceptable passing score based on 90 percent of the participating E-4s submission packages, Daigrepont said. The sailors who have to take late or makeup tests are promoted if they score at or above that baseline, provided, of course, they meet other promotion requirements.

The Navy builds flexibility into the enlisted promotion system, &#8220;a swag factor,&#8221; that allows for the times in which sailors might have to take a late test, explained Master Chief Petty Officer Willie Clouse, the head enlisted sailor for Navy Region Europe.

The difference for the Naples sailors is they will learn of their promotions later than others, who usually find out late November or early December. However, if selected, officials do not believe the incident will delay their actual advancement dates.