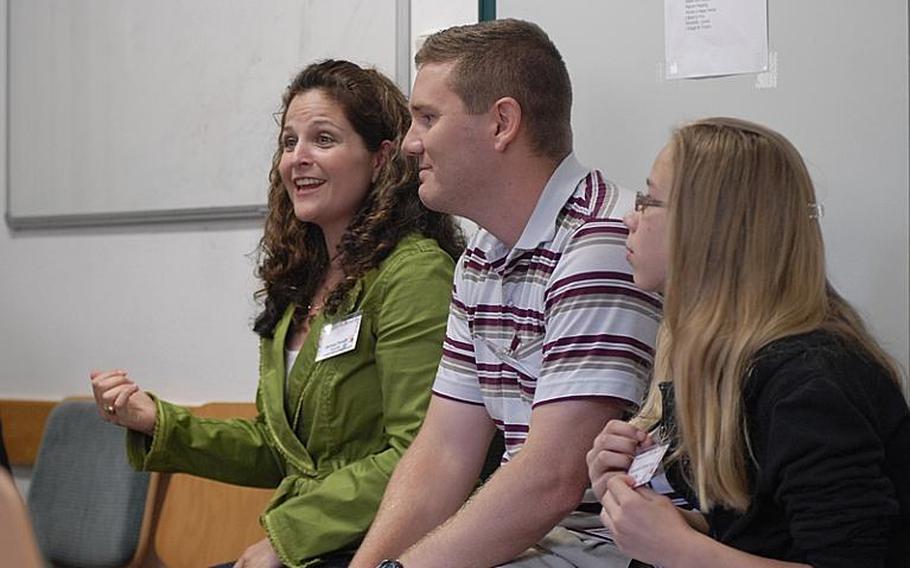 Buy Photo
Melissa Pontiff, left, speaks as husband, Mike, and daughter, Dasha, listen at the 2011 European Adoption Symposium in Kaiserslautern, Germany. The Pontiffs have adopted a pair of siblings from the Ukraine and three siblings from Texas. (Mark Patton/Stars and Stripes) KAISERSLAUTERN, Germany &mdash; Krista Karp used to shy away from church on Mother&rsquo;s Day, envious of happy moms strolling with their laughing children decked out in their Sunday best.

After five miscarriages along with expensive fertility treatment that offered no guarantee of success, it was hard to blame her. Then Karp and her husband made the decision to adopt.

As she looked at her 6-year-old daughter, Jenna, who had a fistful of fresh flowers after playing outside and a smile that could melt the heart of Ebenezer Scrooge, it&rsquo;s obvious that Karp doesn&rsquo;t avoid Mother&rsquo;s Day now. In fact, her sixth pregnancy was a success, so she has two children to share the holiday with.

Karp was one of the coordinators of the 2011 European Adoption Symposium, during which about 100 parents and hopeful future parents gathered to discuss various aspects of adoption.

The annual symposium, sponsored by the Kaiserslautern Military Community Adoption Support Group and the 86th Air Base Wing Chapel Outreach Program, gives visitors a chance to discuss the good, bad and ugly of adoption with those who know best, parents who have been there and done that. The support group also offers monthly play dates for children, a support group and an online discussions.

&ldquo;We were blessed with infertility. &hellip; I got blessed with the fruits of somebody else&rsquo;s labor, literally,&rdquo; Melissa Pontiff said during the Older and Sibling Group Adoption and Behavioral Needs seminar. She and her husband, Mike, were among the seminar speakers, and they have experience with adopted children. A lot of it.

The Pontiffs adopted a pair of siblings from the Ukraine and three siblings from Texas. They shared a story of their daughter Dasha, who was 5&frac12; years old with no English when she was placed with them, but within a year could belt out a &ldquo;Y&rsquo;all&rdquo; that could rival that of a native Texan.

Dasha, now 11, is grateful for being adopted and doesn&rsquo;t take her parents for granted.

&ldquo;It&rsquo;s a blessing, [adoption] gives a kid a chance to experience the same stuff as other kids&hellip;. When you have a family, you get loved,&rdquo; she said.

No matter the reason for attending, each person had his or her own story for wanting to adopt, whether it was fertility issues, health concerns or a desire to open their home to a child.

No matter which road they traveled to parenthood, the speakers all had one thing in common: They wouldn&rsquo;t trade the experience. Many emphasized grants and ways to save for adoption, such as recent tax credits, to encourage those who might think adoption is too expensive for them.

&ldquo;Once you bring him home, adoption is just a word. &hellip; He&rsquo;s our little terror,&rdquo; said Dave Thomas, speaking lovingly of 3-year-old Christian, who was brought home on his and wife Mainoli&rsquo;s 20th wedding anniversary.

Christian was too busy rolling cars across the wooden floor to hear his father&rsquo;s words &mdash; just enjoying what any happy kid his age would do.