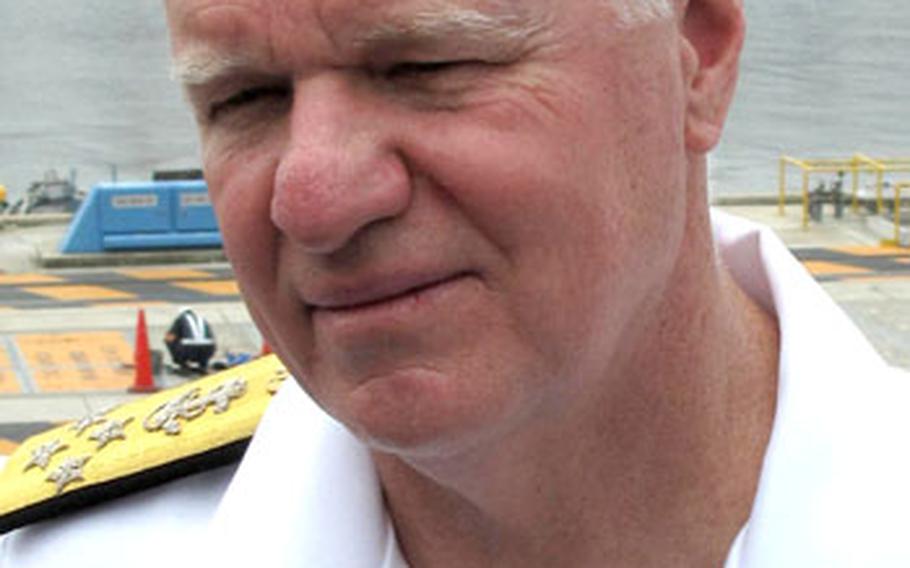 YOKOSUKA NAVAL BASE, Japan &#8212; Amid a new round of missile launches by North Korea since Thursday, Chief of Naval Operations Adm. Gary Roughead called the situation in North Korea and its recent military posturing &#8220;not helpful to the peace and security of the region.&#8221;

The U.S. Navy&#8217;s top admiral, visiting Yokosuka Naval Base near Tokyo on Saturday, spoke to media only hours after South Korean officials reported that North Korea launched more missiles off its eastern coast.

&#8220;North Korea&#8217;s behavior is very unhelpful, but the forces that we have are here to protect the safety and security of the region,&#8221; Roughead said.

Addressing the recent tracking of the North Korean cargo ship Kang Nam, which reportedly has carried munitions exported to other countries, Roughead declined to speculate on its current contents.

But, he said, &#8220;I believe that the capabilities that we have with our forward-deployed forces here make it possible to conduct operations in cooperation with other countries that make it much more difficult for countries to proliferate weapons that are not helpful to the safety and security of the region.&#8221;

The Navy&#8217;s ship monitoring program is part of a United Nations security resolution resulting from a North Korean underground nuclear test in May. The resolution bans North Korea from exporting weapons and nuclear material.

&#8220;I believe we are seeing the effects of the U.N. Security Council resolution,&#8221; the AP quoted Roughead as saying.

U.S. military bases in the Pacific have shown no indication of heightened alert or force protection status in response to the latest North Korean launches.