Admiral: No evidence of hacking in McCain, Fitzgerald collisions 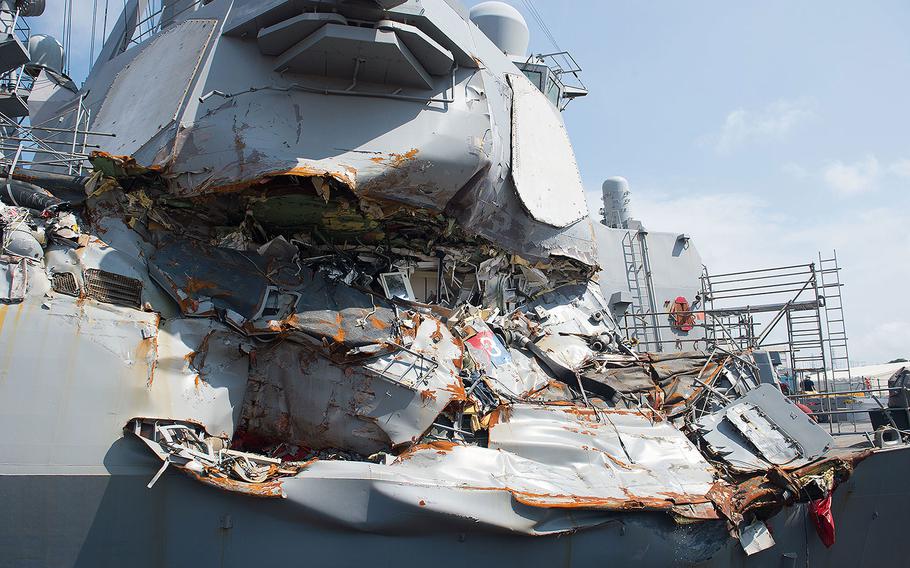 The USS Fitzgerald (DDG 62) sits in Dry Dock 4 at Fleet Activities Yokosuka to continue repairs and assess damage sustained from its June 17 collision with a merchant vessel. (Christian Senyk/U.S. Navy)

The USS Fitzgerald (DDG 62) sits in Dry Dock 4 at Fleet Activities Yokosuka to continue repairs and assess damage sustained from its June 17 collision with a merchant vessel. (Christian Senyk/U.S. Navy) Tugboats from Singapore assist the Guided-missile destroyer USS John S. McCain (DDG 56) as it steers towards Changi Naval Base, Republic of Singapore following a collision with the merchant vessel Alnic MC while underway east of the Straits of Malacca and Singapore on Aug. 21, 2017. (Madailein Abbott/U.S. Navy)

Navy investigators have found no evidence that cyberintrusions played a part in the serious collisions of two guided-missile destroyers in the past three months, the Navy’s chief of naval operations said Wednesday.

During a live-streaming Facebook all-hands call, Adm. John Richardson said he was aware of the “thread of conversation” that cyberattacks could be involved in the collisions of the USS John S. McCain on Aug. 21 and the USS Fitzgerald on June 17.

“I will tell you that we have given that an amazing amount of attention,” Richardson said. “It is sort of a reality of our current situation that part of any kind of investigation or inspection is going to have to take a look at the computer, the cyber — you know, the informational warfare aspect — of our business.

“We’re doing that with these inspections as well. But to date, the inspections we’ve done show that there’s no evidence of any kind of a cyberintrusion.”

Speculation over cyberintrusions as the cause arises in part from the real spate of successful hacks into U.S. government databases in recent years. Hackers in 2013 gained access to databases maintained by the U.S. Office of Personnel Management, stealing personal information on 22 million people in two years.

Analysts have often tracked such intrusions back to hackers in Russia, China and North Korea.

But speculation also has arisen from disbelief that back-to-back collisions could happen, particularly after 7th Fleet recently experienced a major disaster with the Fitzgerald, on which seven sailors died when it collided with a container ship near Japan.

Two months later, 10 sailors died when the McCain collided with an oil tanker east of Singapore.

The commander of 7th Fleet was relieved of command soon after the second collision.

The Navy is now looking at systemic causes of the collisions through a comprehensive review of collisions and mishaps during the past decade, focusing on training, manning, leadership, operational tempo and the practical function of navigational equipment.