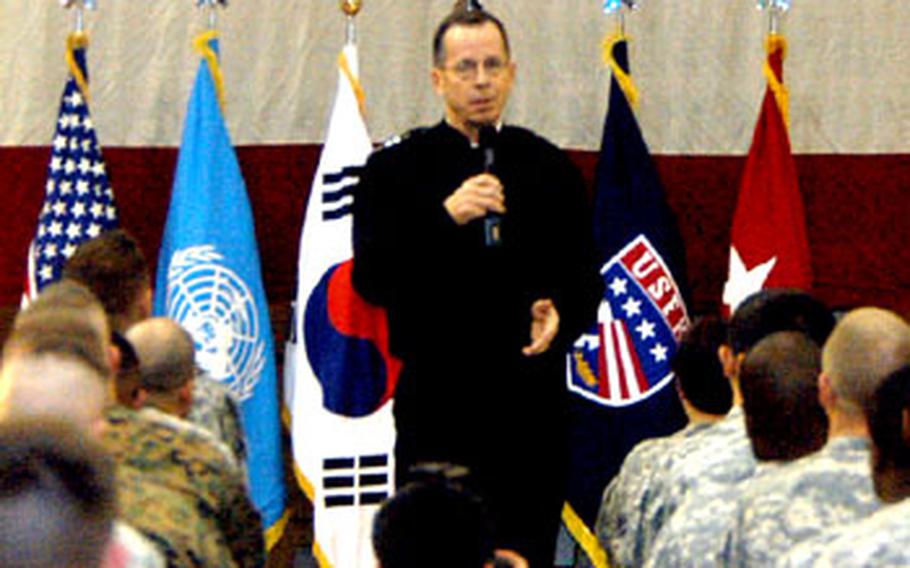 YONGSAN GARRISON, South Korea &#8212; The war on terrorism, the future of the U.S. military and developments in the U.S.-South Korean alliance were among topics discussed Wednesday at Yongsan Garrison during a town hall meeting with the military&#8217;s highest-ranking member.

Chairman of the Joint Chiefs of Staff Adm. Mike Mullen began the meeting by thanking audience members for their service.

He then spoke briefly about his visit to Korea and the U.S. military&#8217;s future in a support role on the peninsula. Mullen and Defense Secretary Robert Gates arrived in South Korea on Tuesday for meetings with military leaders from both countries.

He added that South Korean military leaders he&#8217;s spoken with say they are enthusiastic and feel a sense of pride that they&#8217;re able to move ahead with the transition.

After talking briefly about his priorities as the chairman of the Joint Chiefs, which include developing strategy for the Middle East, &#8220;restoring, revitalizing and reconstituting&#8221; the military and not losing focus on challenges outside the Middle East, Mullen opened the event to questions.

Servicemembers asked about issues ranging from restriction on their behavior to possible new fronts in the war on terrorism.

One soldier asked Mullen about a newscast he&#8217;d seen that suggested alternate explanations for the Sept. 11, 2001, terrorist attacks.

Mullen dismissed alternate explanations for the event as &#8220;conspiracy theory.&#8221;

Mullen described the attacks as the &#8220;signature event" that started a war he said is far from over.

Another soldier asked whether Iran or Syria could become U.S. battlegrounds in the war on terrorism.

Mullen said he was concerned about Iran, adding that the country is a known supporter of terrorists and had been providing technology used to kill U.S. and coalition servicemembers.

He said he hoped diplomacy would solve the problem, but warned that military options should not be ruled out.