Add to the heat: Mom sends kimchee-flavored noodles to son in Iraq 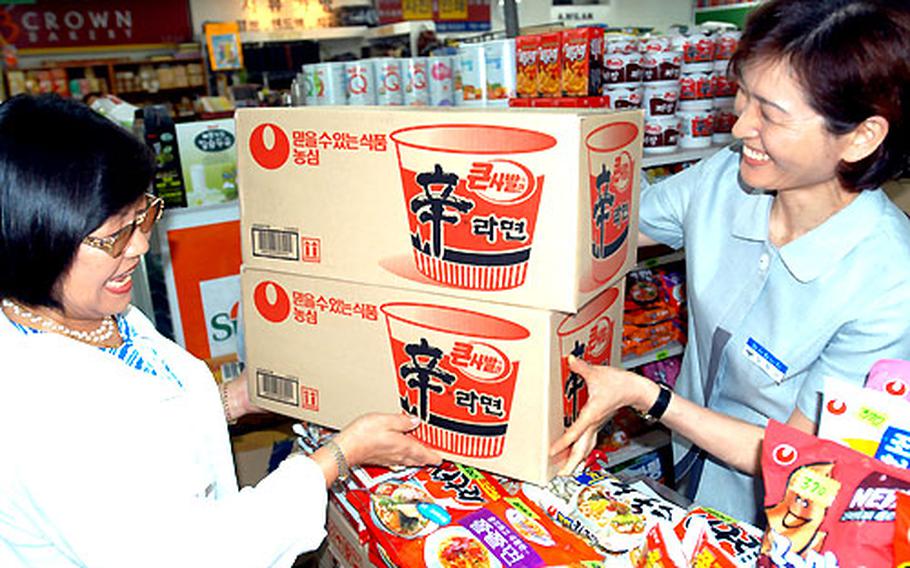 YONGSAN GARRISON, South Korea &#8212; You&#8217;d probably be hard pressed to get kimchee-flavored noodles on the streets of Baghdad these days.

Unless your caring mother is sending them from South Korea.

Over the last few months, Meacha Sullivan has sent several cases of the spicy hot noodles to her son, 1st Lt. Patrick Sullivan. The 26-year-old officer, who has been in the Army about three years, is stationed somewhere in Baghdad with the 596th Signal Company, his mother said.

Sullivan&#8217;s pasta pipeline started with a few packages tucked in a care package for Patrick &#8212; but the noodles caught on. Other soldiers in his unit began slurping them despite Iraq&#8217;s searing heat. The attraction may be in the meal&#8217;s simplicity: Only hot water and a few minutes waiting are required and the noodles are ready to eat.

Meacha Sullivan has a history of helping soldiers during wartime. During Desert Storm and Desert Shield, she lived at Fort Jackson, S.C., where her husband, Mark &#8212; now a retired colonel &#8212; was a battalion commander.

Meacha &#8212; originally from South Korea but a U.S. resident since 1975 &#8212; spearheaded a drive to send necessities such as sunblock to U.S. troops in the Middle East.

This time, her idea was prompted by a story in Stars and Stripes about a stateside drive to send air conditioners to Iraq.

Sullivan and her husband live in Columbia, S.C., but are now in South Korea temporarily for work, she said. A few times each month, she walks from the Dragon Hill Lodge to a basement market near the South Korean Defense Ministry.

The ramyun saleswoman, Yang Hwae-soon, greeted her Wednesday with a grin.

Sullivan sought a brand called Shin Ramyun. Its flavor is kimchee, Korea&#8217;s national dish of pickled fermented cabbage. You can say Shin Ramyun is a family tradition for the Sullivans.

Both their sons ate it while growing up; the family sought the rare brand at Korean groceries in the States, said Mark Sullivan, who served in South Korea periodically since 1970, with Special Forces units. The spice packet in Shin Ramyun is &#8220;primo&#8221; and both Koreans and non-natives recognize it as some of the world&#8217;s best ramyun, the father said.

&#8220;The Koreans like this because it makes them sweat,&#8221; said Mark Sullivan, who now works for an Alexandria, Va.-based contractor. &#8220;The Americans just eat it up when they are looking for something spicy.

From there, Sullivan wraps them and takes the package to the post office, where she sends it to Iraq for free through the military postal system. The noodles &#8212; which go from South Korea to Germany and then to Iraq &#8212; still have been reaching her son within 10 days, she said.

Mark Sullivan describes his wife as a &#8220;typical mom&#8221; who started by sending care packages to her son in college. They hear from their son about once a week through e-mail but have not spoken to him by telephone since he deployed to Iraq in April.

Their other son, Prescott, 24, is in the National Guard in Louisville, Ky., and has volunteered to go to Iraq, the Sullivans said.

Meacha Sullivan said she isn&#8217;t too keen on having two sons in Iraq but realizes their commitment to the United States.

Her husband, who spent 31 years in the military and retired in May 2000, also understands.

A peace that, for the Sullivans, is powered one spicy noodle package at a time.