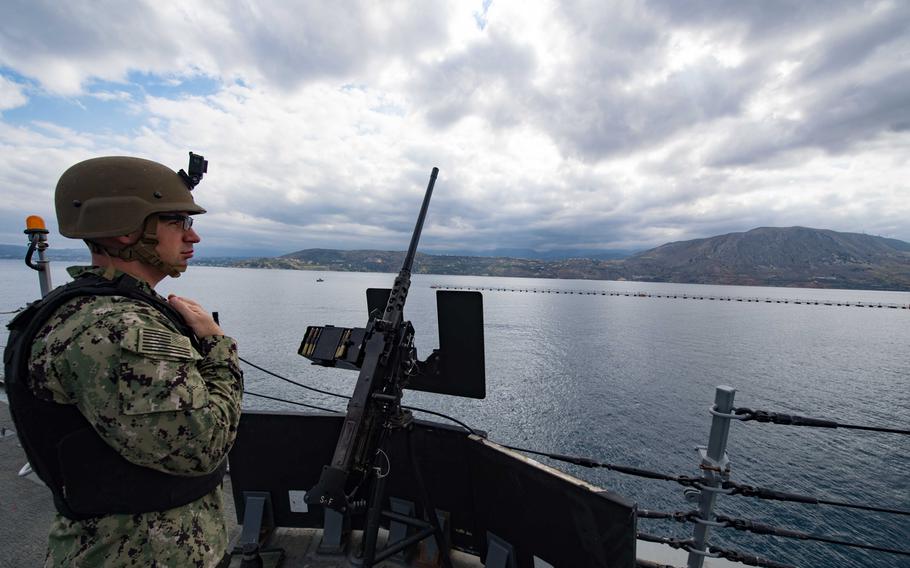 STUTTGART, Germany — Greece has invited the U.S. to set up new bases in the country, offering up coastal northeastern cities that would place American forces at the gateway to the Black Sea and in close proximity to the Balkans.

While a base at Souda Bay on the island of Crete has long been a key location for the U.S. Navy, the Pentagon is welcome to build up in other Greek locales, Kammenos said.

“It is very important for Greece that the United States deploy military assets in Greece on a more permanent basis, not only in Souda Bay but also in Larissa, in Volos, in Alexandroupoli,” he said.

Greece is pressing for more troops at a time when regional rival Turkey has become more unpredictable and Russia more active in Greece’s neighborhood. In September, Greek officials made similar overtures during a visit by Joint Chiefs of Staff Chairman Gen. Joseph Dunford.

Greece hasn’t said what type of American military presence it seeks and the U.S. hasn’t signaled a desire to build anything new. Still, Greece’s calls for more cooperation have been welcomed by Mattis and Dunford.

“So thank you for your continued hosting of U.S. forces at Souda Bay, one of the most popular locations for U.S. sailors anywhere in the world,” Mattis said Wednesday.

The statements on Wednesday marked the first time Greece has publicly offered specific locations for basing in a meeting with U.S. defense officials.

Both Alexandroupoli and Volos are port cities on the Aegean Sea that would give the U.S. military a stronger foothold in a region viewed by the Pentagon as growing in strategic importance.

In addition to Souda Bay, the U.S. operates MQ-9 Reaper drones out of Greece’s Larissa Air Force Base. Kammenos also said the U.S. can grow at Larissa, which gives the U.S. a surveillance outpost that can reach into Syria, northern Africa and the Black Sea region.

Greece joins fellow NATO member Poland as countries clamoring for more U.S. troops. Poland is pushing for a permanent military base and combat troops because of concerns about Russia. U.S. military leaders say they are reviewing Warsaw’s proposal.

While the U.S. military and NATO have focused much of their attention on the eastern flank of Russia in places like the Baltics and Poland, the greater Black Sea region also is regarded by some security analysts and military officials as a potential flashpoint with Russia.

NATO of late has kept a close eye on Russia’s moves in southern Europe, where there have been discussions within the alliance about setting up a Black Sea naval flotilla. So far, those efforts have failed to gain traction.

However, allies have noted Russia’s more assertive stance in the Black Sea and Mediterranean, where U.S. Navy leaders have said Russian patrols are occurring at levels not seen since the Cold War.

Russia’s access to the Mediterranean runs from the Black Sea, through Turkey’s Sea of Marmara and into the Aegean Sea.

In recent years, the Greek government has had solid relations with Moscow, but there are new tensions. Turkey’s closer ties with Russia also could factor into Athens’ push for closer military ties with the U.S. And in July, Athens expelled two Russian diplomats after allegations that Moscow was undermining a political deal between Greece and Macedonia to enable the western Balkan state to join NATO.

“We applaud Greece’s stalwart commitment to protecting democratic values by expelling Russian diplomats,” Mattis said. “In doing so, Greece made clear that the birthplace of democracy would not tolerate reckless violation and disrespect for international norms and your sovereignty.”