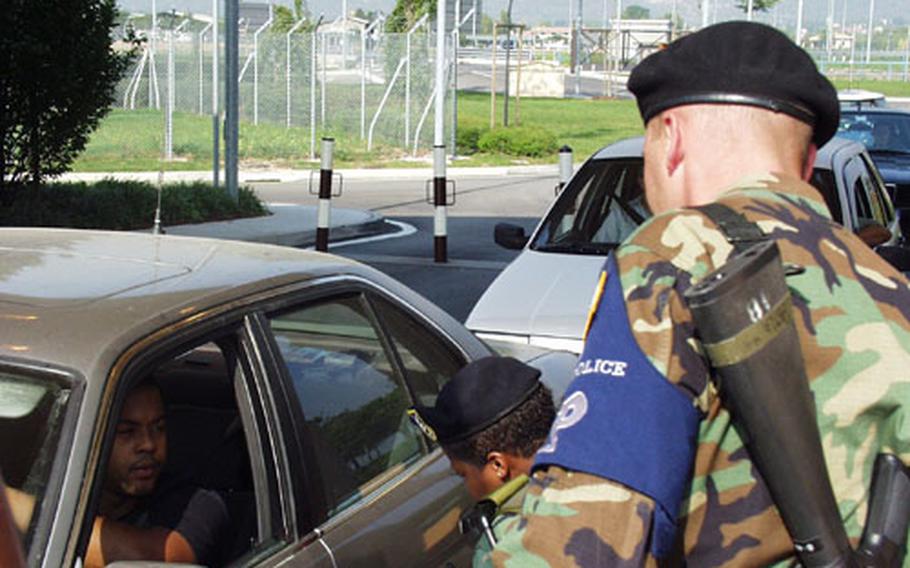 A Minnesota National Guardsman, wearing an armband to show his affiliation with the Air Force, checks out a motorist passing through the gate at Aviano Air Base in Italy. The part-time soldiers are spending the next six months on active duty in Europe, guarding gates at bases in the United Kingdom, Belgium, Germany, Italy and Turkey. (Kent Harris / S&S)

You might get the picture that Task Force Minnesota has a lot of adjustments to make for its six-month mission in Europe.

&#8220;This is really foreign to us in several ways,&#8221; said Staff Sgt. Steven Wegleitner, a member of the 151st Field Artillery Regiment&#8217;s Battery F, which is assigned to Aviano Air Base in Italy.

The task force, composed mainly of elements of the Minnesota National Guard&#8217;s 1st Battalion, 125th Field Artillery Regiment, is now providing security at bases in the United Kingdom, Belgium, Germany, Italy and Turkey. As strange as it is for some of the guardsmen to be on active duty for more than half a year, many are performing duties at Air Force bases, adding another difference.

Well, maybe not that different.

Capt. Jim Helvig, who commands the battery at Aviano, spent a dozen years as a military policeman. Any differences between an MP and an Air Force security forces officer?

But most of Helvig&#8217;s unit is a bit newer to the security business. Lt. Col. Bruce Jensen, the battalion commander, said his task force is full of quick learners, though.

And while providing security at gates is different from firing heavy artillery pieces, soldiers are soldiers, he said. The task force underwent specialized security training at Fort McCoy, Wis., before heading to Europe to replace a similar unit from Puerto Rico.

About 220 soldiers from the task force are in England, guarding RAF Lakenheath and RAF Mildenhall, the Air Force&#8217;s largest bases in the U.K. The unit&#8217;s soldiers also are helping out at RAF Alconbury and RAF Croughton.

He said he had heard Bosnia and Kosovo were possible destinations for the 34th (Red Bull) Infantry Division. Various units of the division are assigned in the Balkans and Southwest Asia.

For Kuehl, 29, an electrician from Sioux Falls, S.D., the mission prevented him from leaving the guard, which he joined 12 years ago. His day of departure was Aug. 4, but the order came on July 5.

Providing security is all right, he said, but artillerymen like to fire the big guns.