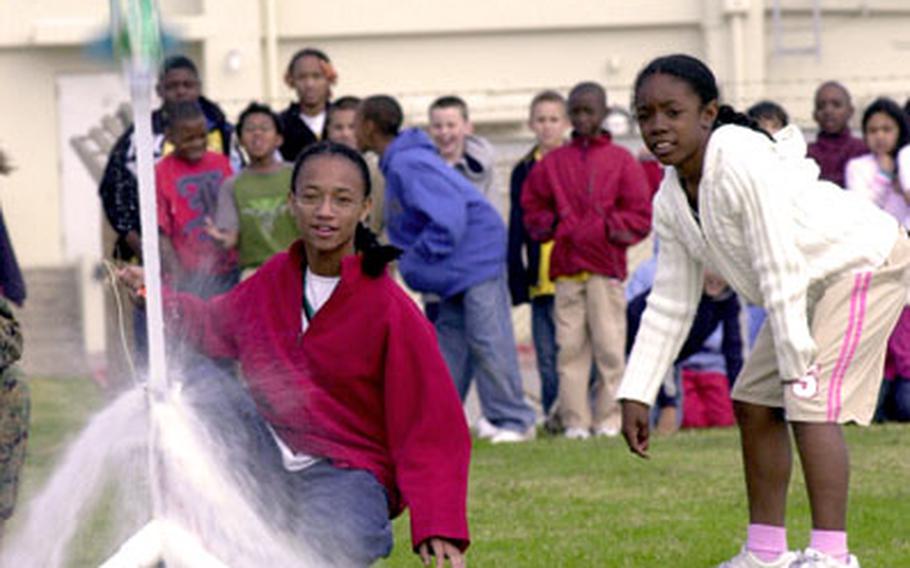 CAMP KINSER, Okinawa &#8212; It wasn&#8217;t all rocket science in Laurie Arensdorf&#8217;s fifth-grade class here: There was a hidden economics lesson, too.

Arensdorf&#8217;s students at Kinser Elementary School spent about 2&#189; weeks working on a water bottle rocket project in which they were learning the ins and outs of potential and kinetic energy. The culminating event was two-student teams launching the handmade rockets Tuesday using nothing more than water and air pressure.

The project began when Arensdorf briefed students on the assignment in late January. They were then given a fictitious $1 million wad of cash and quickly learned that time is money.

Every group came in well under budget at right around $500,000, Arensdorf said, adding that if over budget, the team wouldn&#8217;t have been allowed to launch.

On Tuesday, each team took its turn at the launch pad, where the rocket was fueled with water and a hose was placed into the bottle.

Arensdorf would then use a bike pump to pressurize the bottle to about 80 pounds per square inch and take the safety off the launcher. One of the team members would pull a rope, releasing the bottle, which would take off as the water was forced out of the end by the pressure.

Arensdorf estimated the bottles were taking off at around 50 mph, and traveling between 50 and 70 feet into the air.

For one student, 10-year-old Nicole Smith, the launch of her team&#8217;s rocket was a surprise.