Actor Will Smith pays a visit to Yokota Air Base 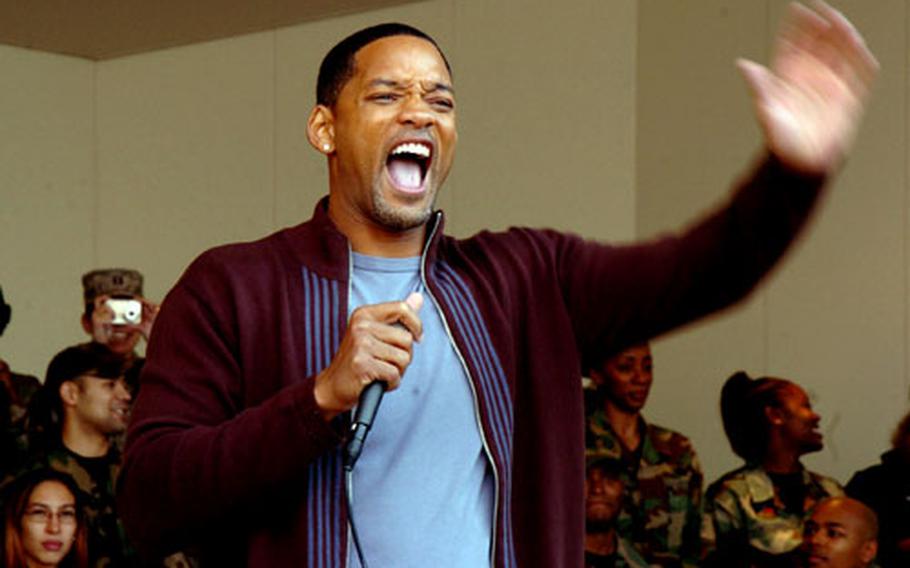 Actor Will Smith thrilled troops and family members Tuesday during a visit to Yokota Air Base, Japan. The Hollywood star is in Tokyo to plug the upcoming release of his new apocalyptic thriller, “I Am Legend,” which opens Dec. 21 in Pacific military theaters. (Christopher B. Stoltz / S&S)

Actor Will Smith thrilled troops and family members Tuesday during a visit to Yokota Air Base, Japan. The Hollywood star is in Tokyo to plug the upcoming release of his new apocalyptic thriller, “I Am Legend,” which opens Dec. 21 in Pacific military theaters. (Christopher B. Stoltz / S&S) 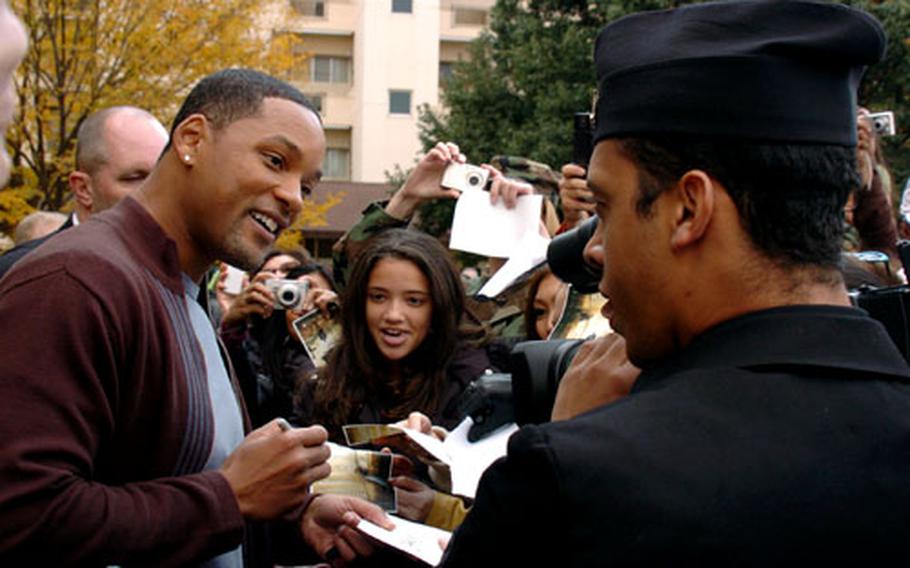 Actor Will Smith signs autographs during a visit to Yokota Air Base, Japan. (Christopher B. Stoltz / S&S) 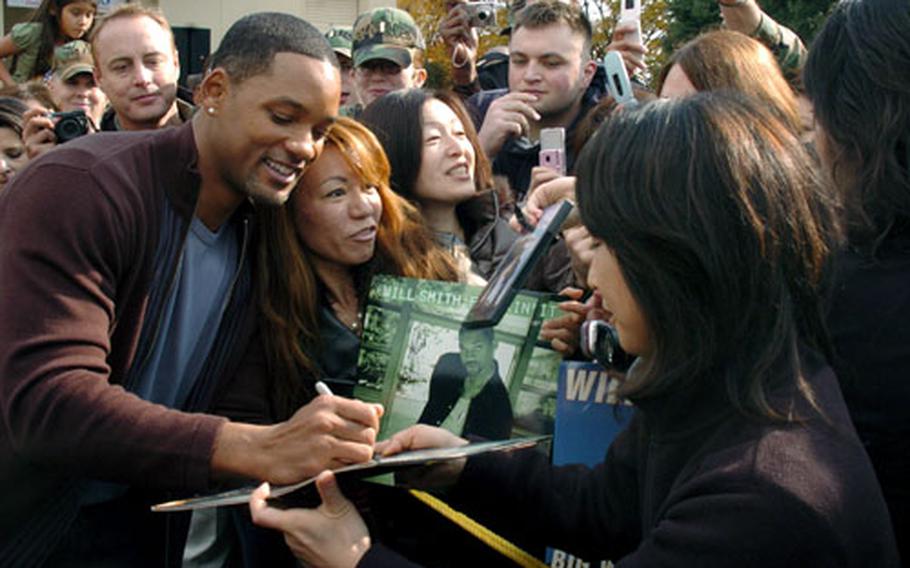 Actor Will Smith signs and poses at Yokota. (Christopher B. Stoltz / S&S) 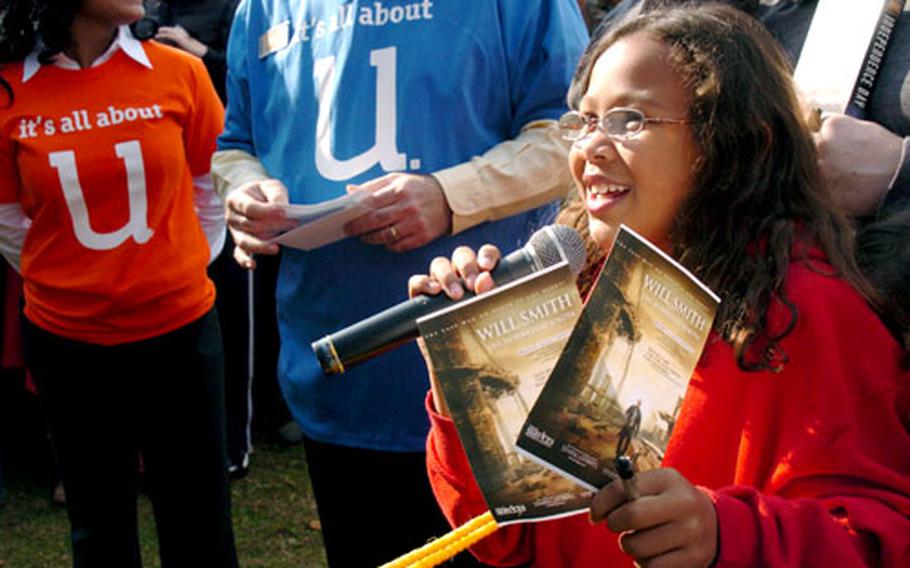 Jordan Erion, 9, asks actor Will Smith if he has his own clothing line during his visit to Yokota Air Base, Japan. (Christopher B. Stoltz / S&S)

With her husband, Albert, away in Kyrgyzstan, the Yokota woman was among several spouses of deployed servicemembers invited on stage to meet Hollywood megastar Will Smith during his visit to the base.

&#8220;My husband is deployed to Afghanistan. He told me I can&#8217;t leave here without a kiss,&#8221; one woman said during a random question-and-answer session.

Without hesitating, Smith leapt off the stage, raced toward the woman and kissed her on the cheek.

After flying in on a Black Hawk helicopter from Hardy Barracks in Tokyo, Smith addressed fans and then headed into the audience to sign autographs and pose for photos with servicemembers, civilians and their families. He smiled, waved and blew kisses to the crowd, pausing for as many requests as he could cram in.

The two-time Oscar nominee is in Japan to plug the upcoming release of his long-awaited, post-apocalyptic sci-fi thriller &#8220;I Am Legend.&#8221; The world premiere was set for Wednesday at the Tokyo International Forum.

Airman Kenneth Bailey of the 374th Maintenance Group got an autograph and a handshake from Smith.

Handed a microphone, a young girl asked Smith to name the best movie he&#8217;s appeared in.

Laura Vargas, 25, a military spouse from Chicago, said she was thrilled to see a big star on base.

In a brief interview with Stars and Stripes, one of the planet&#8217;s biggest movie stars said he frequently travels the world promoting his films but felt a need to visit the troops during his three-day Japan stop.

Smith&#8217;s promotional visit for U.S. Forces Japan was sponsored by Stars and Stripes, in association with Access Television, Japan.

&#8220;I Am Legend&#8221; certainly delivers plenty of thrills, chills and big-screen suspense, but it also lacks major twists and turns, treading a path that occasionally becomes too predictable.

Media members were shown an advance screening of the film Monday night in Tokyo&#8217;s Ginza district.

In the latest version, Smith plays Robert Neville, a brilliant scientist with a military past who winds up the sole survivor in what remains of New York City following a catastrophic, incurable virus outbreak. Some scenes required the crew to shut down six blocks of Fifth Avenue.

&#8220;I&#8217;ve never done anything before that had this level of scariness, or this level of intensity with that fear-level complex,&#8221; Smith said Tuesday during a visit to Yokota Air Base. &#8220;If everybody actually was gone, what would it be like? I had a great time exploring that.&#8221;

In the role, Smith is often the only actor on screen, but he keeps the audience locked in with a gripping, passionate and emotional performance.

But Neville, somehow immune to the plague, isn&#8217;t completely alone. Danger and evil lurk in the dark.

&#8220;I Am Legend&#8221; features an intriguing plot and cool concept. The special effects are top shelf, and Smith turns in a compelling effort, but the futuristic storyline seems underdeveloped and rushed to conclusion.

&#8220;I Am Legend&#8221; is set for a Dec. 14 release in the United States, Japan and South Korea. The movie opens Dec. 21 in Army and Air Force Exchange Service theaters at Yokota Air Base, Japan; Yongsan Garrison and Kunsan Air Base in South Korea; and Kadena Air Base, Okinawa.