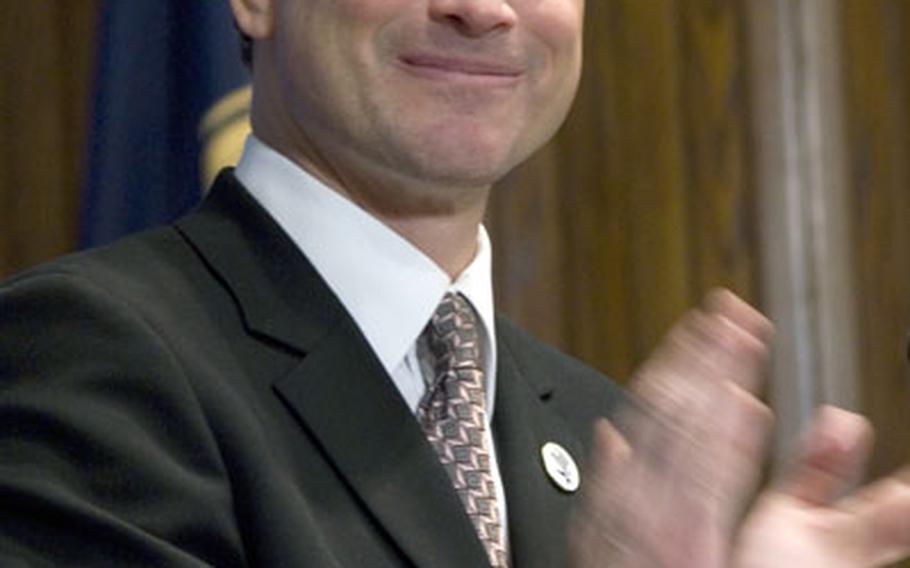 During a speech at the national Press Club, actor Gary Sinise leads a round of applause for servicemembers in the audience. (Joe Gromelski / S&S)

WASHINGTON &#8212; The American Veterans Disabled for Life Memorial is half way to groundbreaking.

In addition to this luncheon, fund-raising continues with public service announcements and promotions on the foundation&#8217;s Web site, www.disabledveteransmemorial.org. The Disabled Veterans&#8217; LIFE Memorial Foundation also will be holding a congressional reception Wednesday to honor former President Clinton and 10 members of Congress for their commitment to the foundation.

There are more than 3 million disabled American veterans around the world. The memorial would be the first built to recognize the sacrifices of living disabled veterans, Sinise said.

According to the Web site, the memorial&#8217;s design, approved in 2004, focuses on a star-shaped reflecting pool, its surface broken by an eternal flame. It will be located near the U.S. Botanical Gardens, in full view of the Capitol building, and is slated for completion in 2010.

This isn&#8217;t the Academy Award-nominated actor&#8217;s first experience with servicemembers. He has been on 20 United Service Organizations (USO) tours since Sept. 11, 2001, and is actively involved in the Defense Department program &#8220;America Supports You.&#8221;

But it was a piece of theater that really sparked the actor to become an advocate for veterans.

Sinise was so moved by the play, he produced and directed a version of &#8220;The Tracers&#8221; in 1984, spending hours with Vietnam veterans, listening to their stories.

&#8220;So many good things came from this film. But I&#8217;ll never forget getting a call from the Disabled American Veterans (DAV) offering to honor me for my portrayal at their national convention,&#8221; Sinise said.

After receiving the award, the DAV asked Sinise to become the spokesman for the memorial.