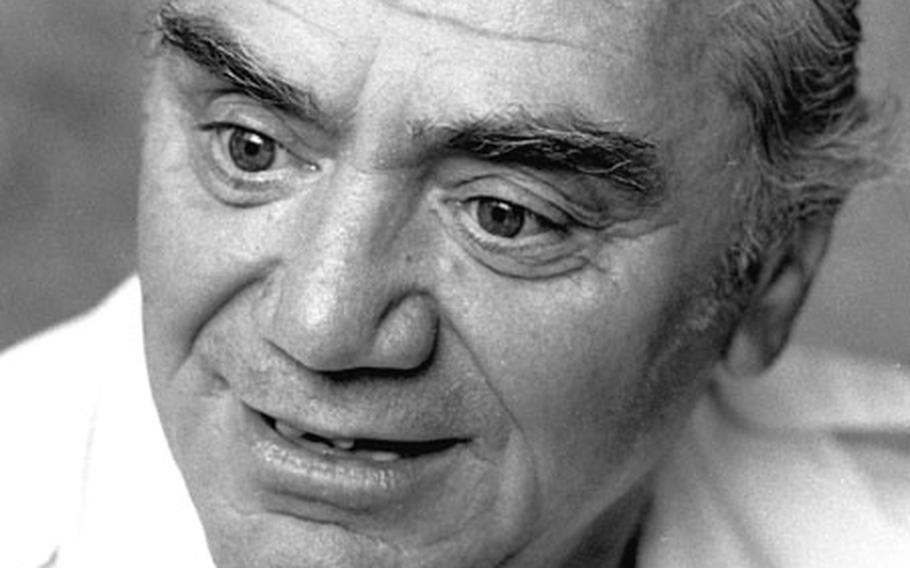 Buy Photo
Actor Ernest Borgnine ponders a question during an interview with a Stars and Stripes reporter at a Wiesbaden hotel in June, 1979. (Dave Didio/Stars and Stripes) 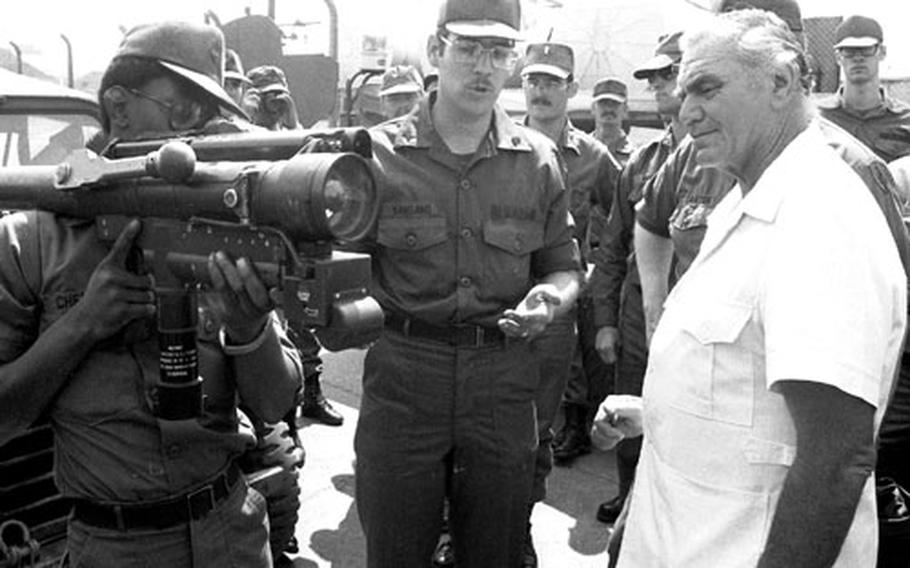 Buy Photo
Actor Ernest Borgnine sits down for a TV interview at Mainz, Germany, in June, 1979. (Dave Didio/Stars and Stripes) MAINZ, Germany &mdash; Veteran actor Ernest Borgnine, in Europe to film a movie about World War I, created a mild sensation Thursday when he paid a surprise visit to the 4th Bn, 69th Armor, here.

Borgnine, who won an Oscar for his portrayal of "Marty" in 1956, took a break from his acting chores in Czechoslovakia to visit an area of Germany he last saw 30 years ago.

Borgnine, flashing his familiar gap-toothed smile, signed autographs and joked with the armor troops about his 10 years in the Navy. "We had a big Navy gun on my ship, but we were afraid to shoot it because of the wooden decks ... And among other weapons, we had a slingshot, which I believe was a lot more valuable."

Dressed completely in white, the husky 62-year-old star declined green coveralls and clambered aboard an M60A1 tank. As he talked to its crew, soldiers elbowed each other, for photo angles.

In an interview at his hotel in Wiesbaden. Borgnine said he has been working on his 101st picture, a remake of "All Quiet on the Western Front."

"I play a private first class who's been in the war and he's put in charge of these fellows to show them the ropes. He's a wonderful, irascible man who goes out and scrounges midnight requisitions &mdash; the kind of man you'd want on your side.

"We think we're going to have a smash. It's to be out by Armistice Day, November 11," he said.

"We're working in the town of Most, Czechoslovakia, and it's been about half-destroyed already to get at the coal underneath. We're actually blowing up buildings for them which are doubling as movie scenes for us &mdash; some terrific charges going off. But it's really sad to see these oldtimers coming down ... tears in their eyes, as they march along and look at the old buildings they used to live in."

Borgnine said he's working again "with the gentleman who directed me in "Marty," Delbert Mann. Ah, I had no idea I'd get that Oscar. I'm grateful."

Borgnine credits his mother &mdash; an Italian countess &mdash; with the inspiration for his acting career. When he returned to his home in New Haven, Conn., in 1945, after his discharge from the the Navy, he said he didn't know what. to do with himself. "Mother said, `Why don't you become an actor? You always like to make such a damned fool of yourself in front of people."'

As he reminisced about the greats of Hollywood &mdash; Spencer Tracy, Gary Cooper, Frank Sinatra, Grace Kelly, Shelley Winters and director Sam Peckinpah &mdash; Borgnine paid his homage to the Duke, John Wayne. "We often promised each other that we were going to work together &mdash; and we never did. I sure loved that guy. We'll never see his like again."

Borgnine said the two of them were watching "True Grit" for the first time, with Wayne sitting behind him. "He was engrossed all the way through, with the action. The second it finished, I turned to him and said, `Duke, there's your Oscar.' He said, `You're kidding.' About that time, Jimmy Stewart came up and said, 'Hey, you're gonna get an Oscar.' And when he finally got it, he (Wayne) yelled to me, `You were right."'

The 69th Armor troops, many in their early twenties, were familiar with several Borgnine movies, but most knew the actor from the television comedy series, "McHale's Navy."

Spec. 5 Michael Stallings of St. Louis, Mo., told the actor his favorite scene was when Borgnine beat up Frank Sinatra in "From Here to Eternity."

Borgnine responded with his hearty chuckle: "Don't knock it. He (Sinatra) got an Academy Award for it."

His screen interpretation as the sadistic sergeant in that movie was based on an old nemesis of his, said Borgnine. "There was a gunner's mate in the Navy who used to wake us up in the mornings by whacking us with a sawed-off pool cue. We slept in hammocks then and he always hit us where we sagged the most. I always vowed that one day I'd get that guy."

"He looks just like he did in McHale's Navy," said Spec. 4 Fred Seibert of Philadelphia. As Borgnine, appearing fit and enthusiastic, bounded up a riser to a tank, another soldier yelled. "He's used to climbing those boats."

"He's a hell of a guy," chimed in Spec. 5 Michael Ciaccio from New York. "I'm going to frame his autograph. What else would I do with it?"

Co A's first sergeant, Malcolm Carter, was responsible for the actor's hour-long visit to the armor battalion. His wife, Ann, is a communications operator at the Nassauer Hof Hotel in Wiesbaden, where Borgnine and his wife, Tove, checked in Wednesday.

The Carters approached Borgnine, asking if he'd like to meet some soldiers. He had mentioned that he'd visited troops in Wiesbaden 30 years ago while on break from acting work in Denmark.

After briefings by soldiers about Redeye missiles, mortars, TOWS and AVLBs (armored vehicle launched bridge), Borgnine said he still felt the troops were more important. "Troops are troops. There's always that esprit de corps &mdash; and always that machoism about-them. It was there 30 years ago. It still is. My heart goes out to all of you. I love you. Thank you for the job you're doing here."