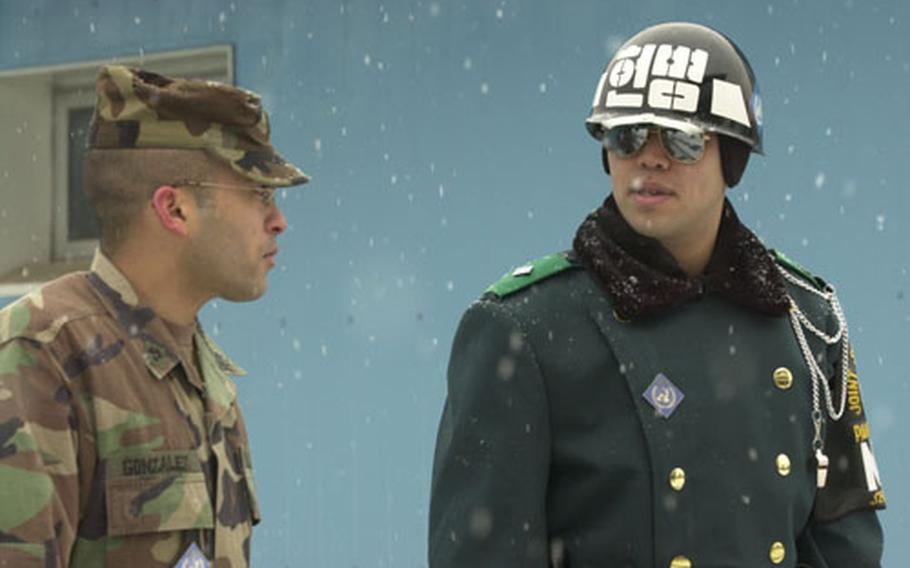 A South Korean and U.S. soldier brave the snow during guard duty at Panmunjom on Friday. (Jeremy Kirk / S&S)

A South Korean and U.S. soldier brave the snow during guard duty at Panmunjom on Friday. (Jeremy Kirk / S&S) 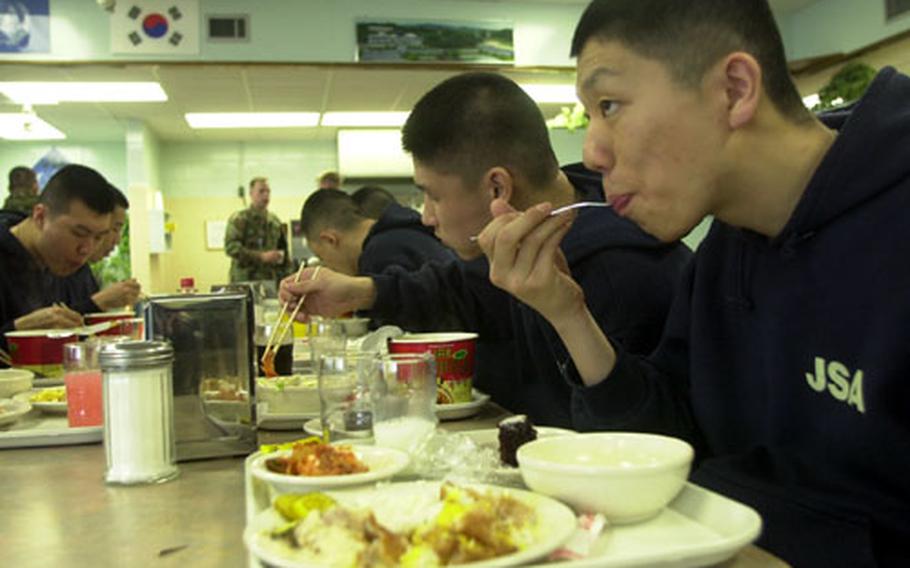 U.S. and Korean soldiers eat lunch at Camp Bonifas on Friday, located about a quarter-mile south of the DMZ. Because of their closeness to the North Korean border, they would be the first to fight if a war with North Korea started. (Jeremy Kirk / S&S)

PANMUNJOM, Korea &#8212; Sgt. Brian Wilson, who sleeps a quarter mile from the Demilitarized Zone, learned from his girlfriend in Orofino, Ohio, exactly what the North Koreans were doing not far from where he rests his head.

Wilson&#8217;s girlfriend, Katie, asked him over the phone why North Korea was bringing machine guns into the DMZ. Up to that point, Wilson hadn&#8217;t heard the country illegally brought 7.62 mm guns there in mid-December.

But the news had reached the United States.

It&#8217;s been one of many headlines recently out of North Korea, which has alarmed the world with its revelation of a nuclear-weapons program, the booting of U.N. inspectors and the restart of a nuclear power plant.

Wilson calmed his girlfriend by saying it was expected from North Korea, which long has been suspected of keeping big weapons in the DMZ despite agreements forbidding them.

The North Koreans &#8212; despite photographs of violations &#8212; simply denied the presence of machine guns in the DMZ in a weekly staff meeting with U.N. officials last week, a U.N. command official said on condition of anonymity. North Korean officers often will counter such accusations by falsely accusing the U.N. of armistice violations without supporting evidence, the official said.

The weapons were brought into a transportation corridor in which North and South Korea are building a highway and railway that will eventually link the countries for the first time.

It&#8217;s an indication of the real grit that characterizes the final Cold War front, where North and South Korea share a border in the middle of the DMZ. The 2.5-mile wide strip of woodsy, mountainous terrain stretches across the peninsula like a belt, defended by hundreds of thousands of soldiers on both sides.

It&#8217;s here that North Korean soldiers play cat-and-mouse, sometimes darting across the border, testing the nerves and readiness of soldiers on the other side.

Among those are U.S. soldiers, some of 37,000 servicemembers stationed in South Korea at the request of that nation&#8217;s government.

The U.S. military stopped routine patrols in the DMZ in the early 1990s, letting their South Korean allies take over the duty. There are only 30 to 40 American soldiers in the DMZ at any one time, though American units are poised just outside the zone.

Of the 550 soldiers in the U.N. Command Security Battalion, about 40 percent are from the United States. They are deployed closest to North Korea, which has a menacing million-man army and chemical and biological weapons.

Two-thirds of them walk around with loaded weapons, and many must sleep in their camouflage uniform to be ready in case of an attack.

For all the danger &#8212; the troops, minefields, tank walls, electrified fences &#8212; there&#8217;s also a museum-like quality to the DMZ. Panmunjom, a cluster of buildings on the border where official contact between the two sides occurs, is a Cold War relic that draws 150,000 tourists annually on the southern side, and a far smaller number in the North.

While the busloads shuttle in and out of Panmunjom, soldiers on the two sides monitor each other with binoculars and fixed video cameras. Only a low stone divider separates them.

North Korean soldiers learn U.S. soldiers&#8217; names and curse across the border, soldiers say. They say the North Koreans have also been known to shout the last names of soldiers, make a slashing motion to their necks and yell in English, &#8220;You&#8217;re next.&#8221;

A couple months ago, North Korean soldiers crept across the border &#8212; in violation of the 1953 armistice agreement that ended the Korean War &#8212; to steal lawn furniture from the DMZ&#8217;s only inhabited South Korean village.

That&#8217;s why U.N. Command Security Battalion soldiers are handpicked for their unblemished records and nerves of steel. Lives may rely on a 22-year-old specialist, Davis said.

North Korean activity on the DMZ is usually provocative, aimed at showing its displeasure with the United States, said Lt. Col. Matt Margotta, security battalion commander. It&#8217;s subsided lately, but historically, when issues have surfaced, North Korea has &#8220;poked a finger at the JSA,&#8221; Margotta said.

A U.N. official said orders for incursions and disruptions are believed to come from the highest levels of North Korean government. When the North&#8217;s guards refer to their &#8220;general,&#8221; they mean strongman Kim Jong Il, the official said.

Margotta&#8217;s battalion is responsible for protecting South Korean residents living in the DMZ as well as watching for North Korean military buildups and intrusions across the border. &#8220;Because of the lack of activity, we probably have heightened our awareness,&#8221; Margotta said.

About 60 percent of his battalion are South Korean soldiers serving their mandatory 26-month military term. Despite a visible anti-U.S. military drive and protests in South Korea, Margotta said he has &#8220;no indication of any rift here.&#8221; However, cultural awareness classes will start soon to help bridge differences.

The Bush administration has said it will rely on diplomacy rather than force to ease tensions with North Korea.

Some analysts say the main reason for such an approach is the 10 million people in Seoul who live within 25 miles of some 12,000 artillery tubes manned by North Korea. U.S. military authorities estimate up to 1,000,000 people would die in the first day of a war on the peninsula.

Wilson said he and other soldiers have received briefings on the damage North Korea is capable of inflicting southward. He said he knows the country has a &#8220;ridiculous&#8221; amount of artillery and admits his post may not be the most ideal place to be if war replaced diplomacy.

&#8212; The Associated Press contributed to this story.