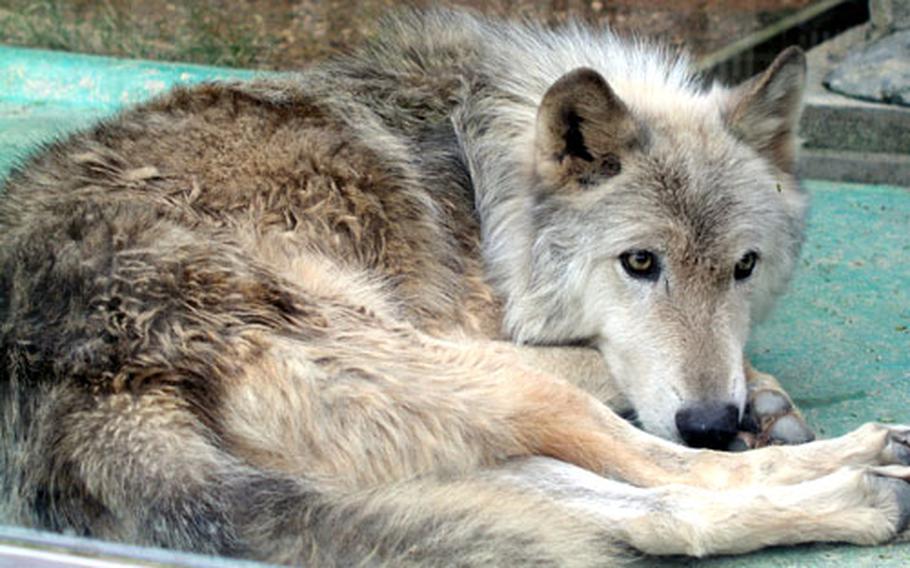 Kei, a 12-year-old Eastern timber wolf, has lived in the Okinawa Children&#39;s Zoo since she was three months old. (Chiyomi Sumida / S&S)

Kei, a 12-year-old Eastern timber wolf, has lived in the Okinawa Children&#39;s Zoo since she was three months old. (Chiyomi Sumida / S&S) 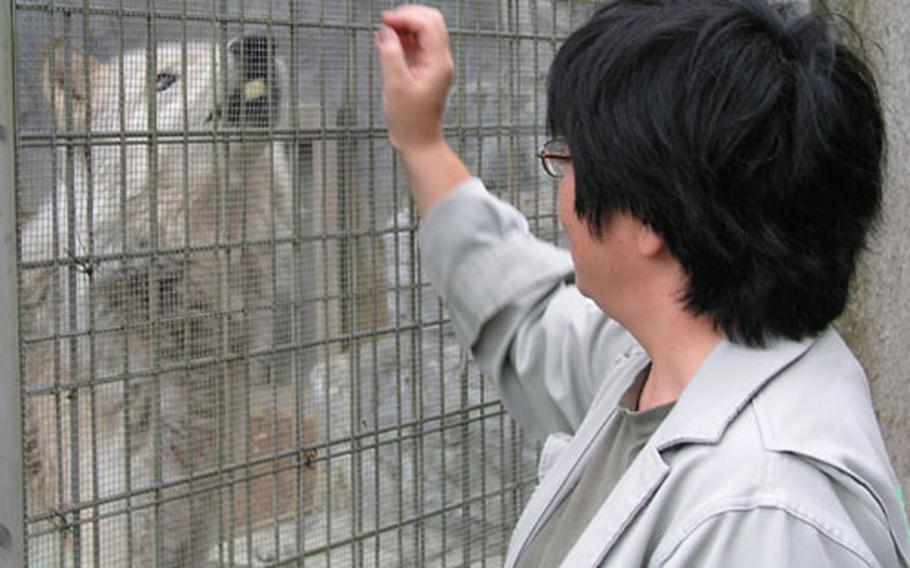 Kei get a snack from her keeper, Kozue Ogimi. (Chiyomi Sumida / S&S)

Kei is a whitish-grey North American timber wolf with haunting eyes who has lived all her life in a zoo and all but the first few months of it in the Okinawa Children&#8217;s Zoo. Now, where she&#8217;ll live the rest of it appears to have has pitted the zoo against an animal rights group led by a U.S. citizen who lives on Okinawa.

The Okinawa Zoo Action Project, headed by Greg Leisure, says the wolf is lonely and out of her element; the group is calling for the zoo to let Kei live out her remaining days in a Rocky Mountains wolf sanctuary that has said it would accept her. Born in April 1992, she arrived at the zoo in July of that year.

Zoo officials counter that the staff is concerned the wolf &#8212; bred, born and raised in a zoo &#8212; would not survive the mountain wilderness sanctuary.

Leisure said his group has met several times with zoo officials. He said that about seven weeks ago, they told him they&#8217;d be willing to let Kei go if the group found a sanctuary but balked when OZAP said the Rocky Mountain facility had agreed to take her.

Leisure said when he asked about the medical report, he was told it would not be made available to the group.

Yoshinobu Nishikawa, the zoo&#8217;s executive administrator, said the staff is concerned about the wolf&#8217;s health. &#8220;They insist to send her to wildness &#8212; a zoo-born wolf,&#8221; he said. &#8220;If we sent her to the sanctuary, she will not be able to survive there. Besides, it is highly questionable if her body at the advanced age could take a long trip, from here to Narita, then fly across the Pacific and transfer to another domestic flight.

Kei is kept in a 22-foot by 13-foot enclosure that is mostly concrete, Leisure said, adding her home offers no natural habitat. He said she performs the same routine every day. &#8220;All she does is pace back and forth,&#8221; he said. &#8220;Our main problem is that it&#8217;s just too small. She&#8217;s a wolf, not a poodle.&#8221; He also said the wolf suffers from being separated from others of her kind, that wolves are highly social animals.

&#8220;Through her life, Kei has been always surrounded by people,&#8221; said Kozue Ogimi. &#8220;Kei is not a wolf in wild surroundings as people of ZAP think is ideal. They say that wolves are social animals; therefore Kei should live with species of her kind. But Kei does not know anything about [the] wolf community.

&#8220;They say that she paces around the cage because of the stress in a small living space, but she starts doing this every day about two hours before dinner time,&#8221; Ogimi said. &#8220;In daytime, she just lies down and sleeps.&#8221;

The chief zookeeper, Genwa Higa, said Kei is living longer than she likely would have in the wild, where a wolf&#8217;s life expectancy is 10 years, compared to 15 years for zoo-kept wolves.

Leisure said he believes keeping her enclosed in the zoo is cruel. He said the animals live in 40- to 50-year-old enclosures, and that ZAP also is trying to get the zoo to increase enclosure sizes and make them more natural.