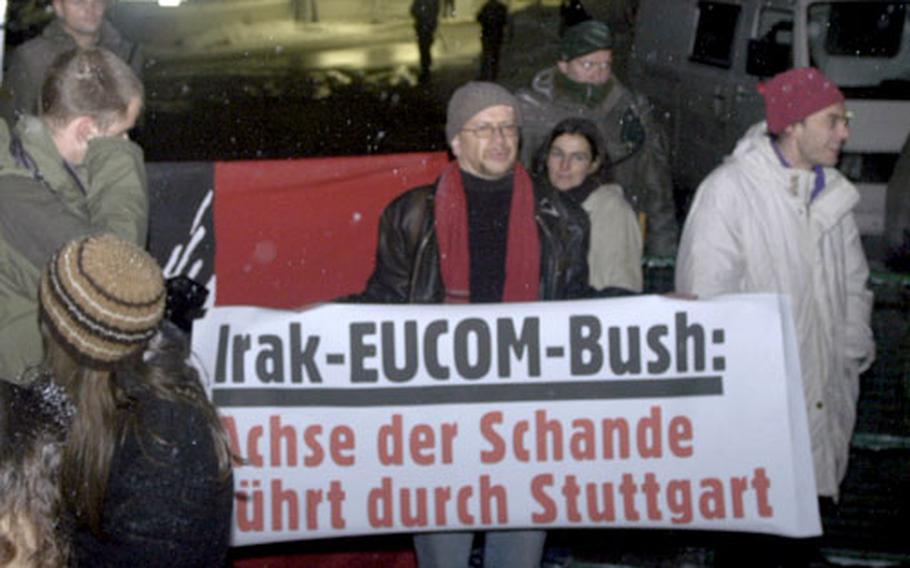 Protesters gather around a sign that reads “The Axis of Shame leads through Stuttgart” during a demonstration on Tuesday outside the U.S. European Command headquarters in Stuttgart, Germany. (Charlie Coon / S&S)

STUTTGART, Germany &#8212; About 40 people protested Tuesday night outside the gate to the U.S. European Command headquarters, calling for an end to the &#8220;war politics&#8221; of the Bush administration.

The demonstrators were kept behind fences and away from the gate so motorists could drive unimpeded in and out of Patch Barracks. About 40 German police officers were on hand to deter violence, which has occurred in past protests at Patch.

U.S. authorities would not say how many security troops it had stationed inside the security gate and barbed-wire-topped fencing.

The protesters stood in the snow, holding signs and blowing whistles and noisemakers. Several who gave speeches contended that the United States blew a chance for post-Cold War peace by employing hawkish policies and tactics.

The event was one of several dozen throughout Germany to coincide with Bush&#8217;s visit .