Active supervolcano could someday imperil US bases near Naples 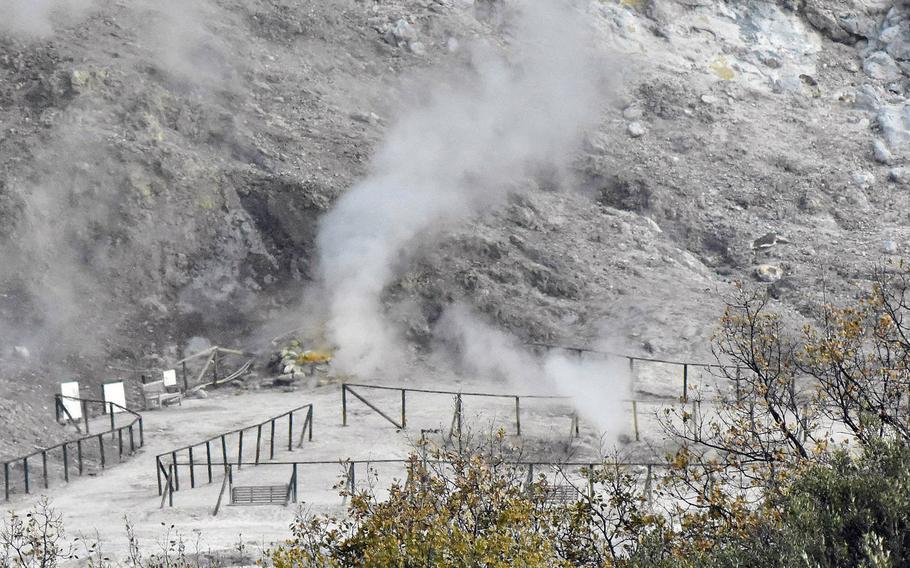 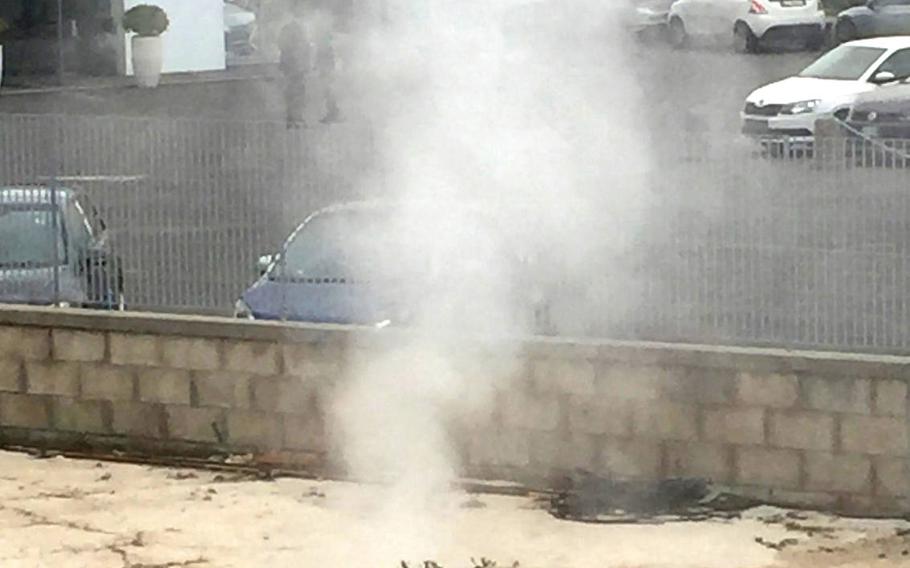 Buy Photo
One of Campi Flegrei's 24 craters blows sulphurous steam at a Volkswagen dealership on Friday, March 16, 2018. The supervolcano, which abuts the town of Pozzuoli, Italy, has grown more active and could endanger1 million residents and U.S. military bases in the area if it erupts. (Scott Wyland/Stars and Stripes) 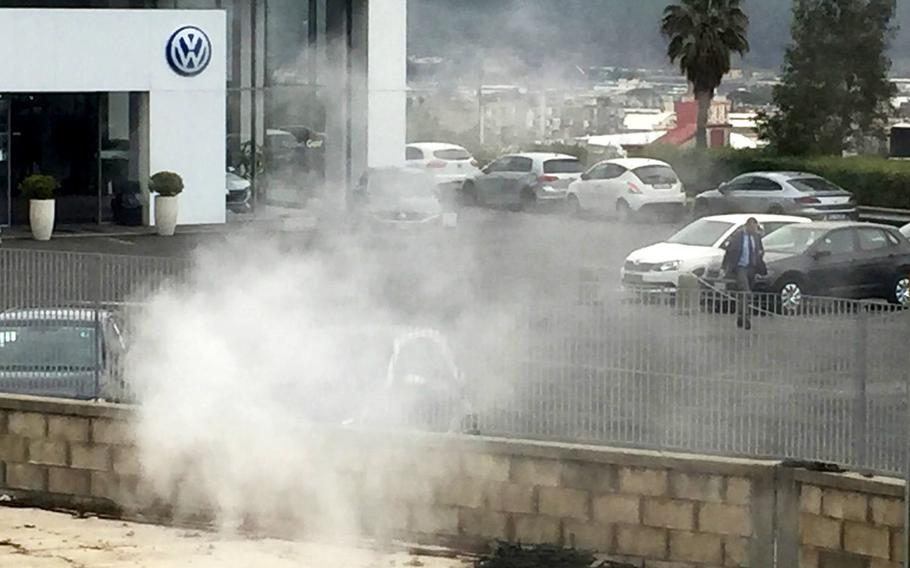 Buy Photo
One of Campi Flegrei's sulphurous craters emits steam at a Volkswagen dealership in Pozzuoli, Italy, on March 6, 2018. Researchers say the underground supervolcano, which covers 90 square miles, has become more active and unpredictable and could erupt in the future. (Scott Wyland/Stars and Stripes) 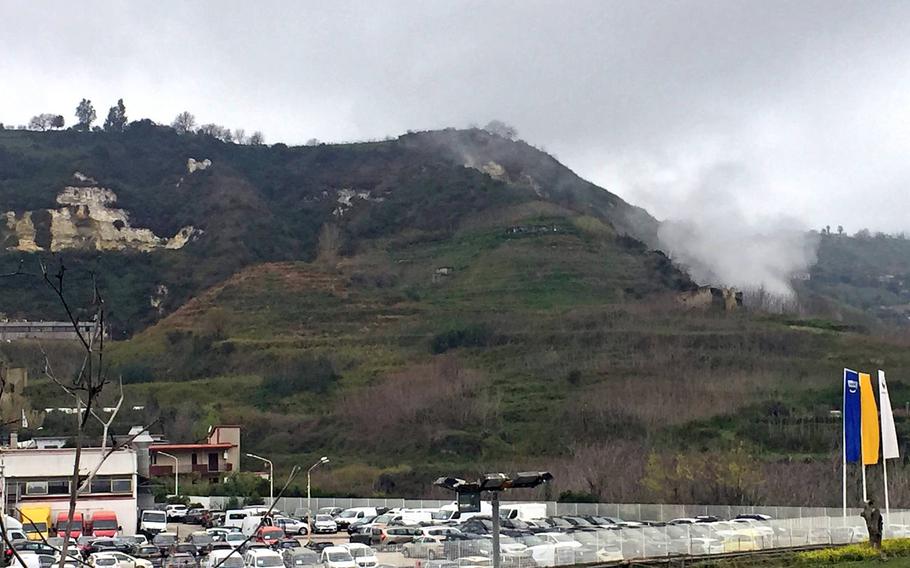 Buy Photo
A Campi Flegrei crater blows steam from a hillside above a car lot on Friday, March 16, 2018 in Pozzuoli, Italy. The supervolcano has become more unpredictable and could threaten U.S. military installations in Naples if it erupts. (Scott Wyland/Stars and Stripes)

NAPLES, Italy — The Campi Flegrei supervolcano west of Naples has become more active and unpredictable, increasing the possibility that it could erupt near a U.S. Navy base.

The massive subterranean volcano has 24 craters, covers about 90 square miles — half of it under the Bay of Naples — and abuts the town of Pozzuoli, where hundreds of Americans live. It’s about 10 miles from the Navy and NATO command hubs and 20 miles from the Navy’s main base housing.

Scientists have observed underground liquids flowing into the caldera — a giant depression that forms when a volcano collapses — causing the volcano to grow hotter since the 1980s. These hot fluids are moving east toward Naples instead of west toward the Mediterranean Sea as they had done in the past.

The flow raises concern about a potentially cataclysmic eruption closer to denser populations. It’s unusual activity for this volcano, which last erupted in the 16th century, said Luca De Siena, geophysicist at the University of Aberdeen in Scotland.

Last year, De Siena and a team of researchers were the first to prove magma had formed under Pozzuoli, creating a hot zone that stokes the volcano.

“You can now characterize Campi Flegrei as being like a boiling pot of soup beneath the surface,” De Siena wrote.

A catastrophic eruption is not imminent and probably won’t happen for many years, said Christopher Kilburn, a volcanologist at University London College.

Still, authorities should be prepared for an emergency response, he said.

The worst-case scenario would be an explosive eruption similar in scale to Mount Vesuvius in A.D. 79, which destroyed Pompeii and nearby Herculaneum.

Molten magma would incinerate everything in its path for at least five miles, and fiery rocks, spewed from the volcano like projectiles, could damage buildings and power sources and endanger people for thousands of miles, Kilburn said.

A smaller eruption is more likely, he said, adding that it’s impossible to predict the magnitude.

The volcano would give clear signals before it blows — such as tremors or geysers forming — allowing people time to evacuate, De Siena said.

Scientists at the Vesuvius Observatory keep constant watch on the Campi Flegrei, Mount Vesuvius and Ischia volcanoes. Founded in 1841, the observatory is the world’s oldest volcanology institute.

The Navy has established an emergency notification system to alert personnel of any danger in the region, said Lt. Pete Pagano, Naples base command spokesman.

It is not the first time the U.S. military has had to factor a volcano into its overseas operations. The 1991 eruption of Mount Pinatubo forced the evacuation of tens of thousands of U.S. personnel from Clark Air Base and Naval Base Subic Bay in the Philippines, effectively ending decades of U.S. presence there after a political agreement on returning fell apart.

So far, Italian officials have not classified any areas around Pozzuoli as red zones, which would bar anyone from living there, Pagano said. Some areas near Vesuvius are red-zoned.

On social media, area residents expressed a mixture of fascination and wariness about living near a volcano creeping toward eruption.

Pozzuoli resident Staci Lindblad, whose husband is a civilian cybersecurity technician, described it as “unnerving.”

“My husband almost died in the Washington Navy Yard shooting a few years back,” Lindblad said. “Interruption of your life can come any time. We took calculated risks coming here a few months ago, aware of the dangers of volcanoes, air pollution, soil issues, crime. Some experiences are worth risking for.”

Campi Flegrei, which translates as “burning fields,” is part of a “Ring of Fire” stretching from the Bay of Naples to Sicily. It includes Mt. Etna, Europe’s largest active volcano, and several undersea volcanos.

In the late 1960s, the volcano triggered a series of tremors. The earthquakes became serious enough for tens of thousands of area residents to evacuate in 1970 and 1983. Milder tremors continue to this day.

A rock layer prevents magma from rising to the surface, which helps suppress an eruption, Kilburn said. It also blocks researchers from seeing all that the magma is doing, he said.

“The reality is that living on top of the most dangerous caldera in the world can be worrisome if you are so inclined,” said Giovanna Vasallo Grimes, a Naples native and former U.S. military contractor. “Like any natural catastrophe there is only so much you can do, and worrying about it will only shorten your life and certainly won’t change the outcome.”