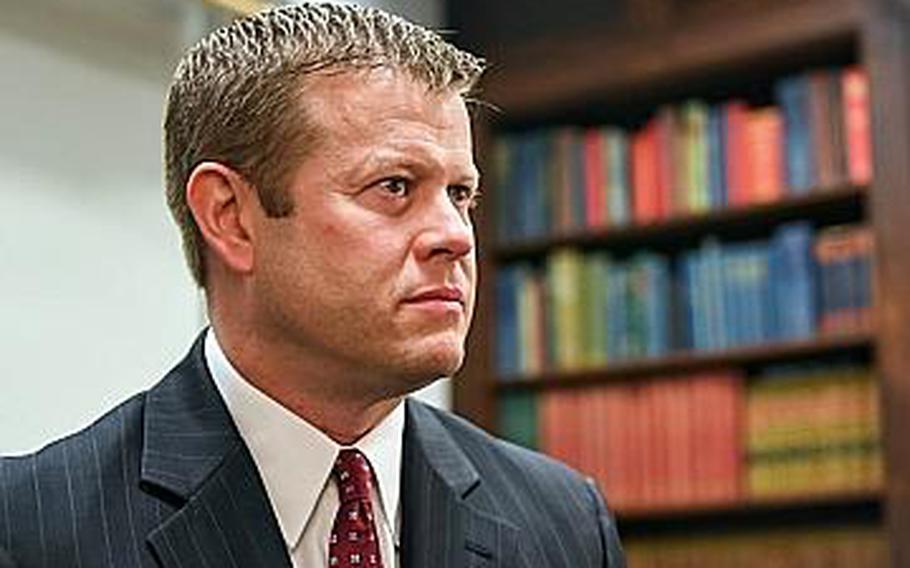 Ryan D. McCarthy poses for his portrait at the Pentagon in Arlington, Va., Aug. 3, 2017, while serving as Under Secretary of the U.S. Army. McCarthy, currently acting Secretary of the Army, recently visited U.S. Army Europe for a firsthand look at the service's needs as he prepares to draw up a budget for the next fiscal year. (Alicia Brand/U.S. Army)

WIESBADEN, Germany — Acting Secretary of the Army Ryan McCarthy said Thursday that the possible cost savings of permanently stationing another brigade in Europe would be just one consideration during budget discussions later this year in Washington.

Inside the Army, there is a growing debate over the merits of the service’s reliance on rotational forces to carry out its mission in Europe, where only two brigades remain permanently assigned after years of drawdown.

McCarthy, who served with the 75th Ranger Regiment in the early days of the Afghanistan war before becoming a special assistant to former Defense Secretary Robert Gates, said the debate hinges on the competing demands of boosting combat readiness and the need to operate efficiently.

“I’ve always said you defend your national interest with a strategy, not a budget,” McCarthy said in an interview with Stars and Stripes in Wiesbaden.

McCarthy visited U.S. Army Europe headquarters before flying to Powidz, Poland, on Friday for a look at the expanding logistics and training base there.

He was accompanied by Sen. Jerry Moran of Kansas, a member of the Senate Appropriations Committee.

“We have to be good stewards of the taxpayers’ money, we have to be conscious, especially when we’re pressurized fiscally, to make the best choices,” McCarthy said. “In large measure, (cost) is a variable in the decision, but we will always do what we think is in the best interest of the unit forward deployed.”

“Heel-to-toe rotations bring great opportunity for the units forward deployed,” McCarthy said. “They get exponentially more repetitions, the small-unit training, live fire exercises, interoperability with partners. There’s a high yield from a readiness standpoint to do that, but it does come at a price.”

U.S. Army Europe’s Lt. Gen. Ben Hodges has argued in favor of rotations, which he says provides a stronger deterrent in regions where allies are nervous about a more aggressive Russia. The units are constantly operating in places such as the Baltics.

Still, the Army’s shift toward more rotational units overseas was prompted largely by the notion that it would be a cheaper.

A recent Army War College study argued that the conventional wisdom was wrong and that it is more affordable to station a brigade in Europe.

McCarthy said readiness is his highest priority — “nothing else comes close,” he said — followed by modernization and support to families.

It’s been a busy summer for rotational and permanently stationed units alike in Europe. Several multinational exercises have taken place, including the massive Saber Guardian exercise held in the Black Sea region in July. Currently, thousands of Russian troops are in Belarus for their own exercise, Zapad, which means “west” in Russian.

Tensions in Europe have heightened since Russia’s invasion of Ukraine’s Crimean Peninsula in 2014. Since then, the Army has reversed the post-Cold War drawdown and beefed up its presence in response to concerns from eastern allies, largely through an increase in rotational units on loan from the States.

“Clearly, the Middle East has had a lot of attention, but the commitment of the United States to the alliance is absolute,” McCarthy said. “I served at the street level in Afghanistan with NATO servicemembers and again in the office of the Secretary of Defense, and the strength of the alliance is as strong as I’ve ever seen it, and I will be a champion for that in my current capacity.”

McCarthy has held his position for less than a month. Before coming to Europe, he visited Redstone Arsenal, Ala., and Fort Bragg, N.C., homes of the Army Materiel Command and Army Forces Command, respectively.

“I thought it was important to see those major commands and sit down with their commanders and understand their priorities, because in large measure it will help me with the formulation and defense of our budget,” he said. “That’s one of my principal responsibilities.”