Acting out a dark day: Airmen sign on as extras in 'Flight 93' film 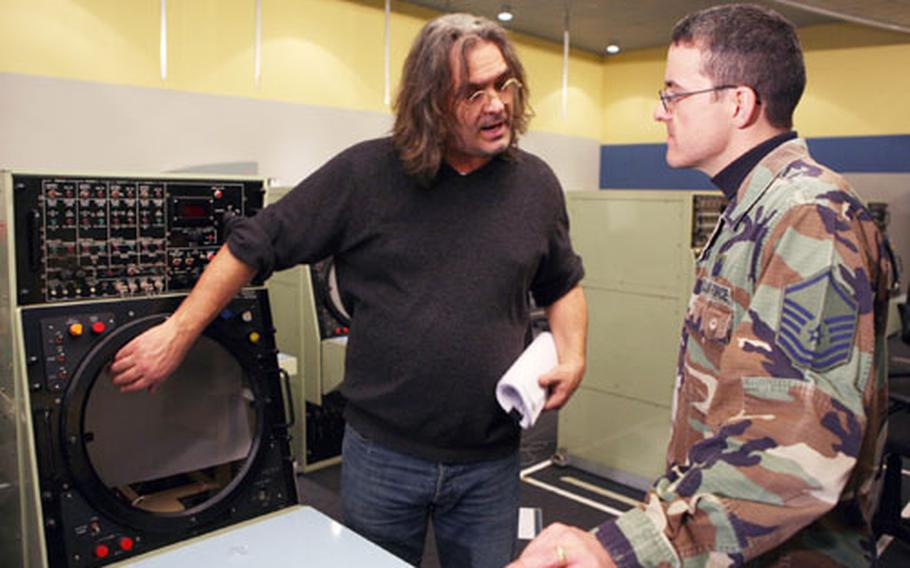 Paul Greengrass, director of the Universal Pictures film “Flight 93,” discusses the construction of the NEADS control center set with Air Force Master Sgt. Larry A. Schneck at Pinewood Studios in London. Dozens of U.S. airmen are playing extras in the film, based on the Sept. 11, 2001, flight that crashed into a Pennsylvania field. The movie is being shot in London. (Photo courtesy of Jonathan Olley)

RAF LAKENHEATH &#8212; When the first major movie dealing with the terrorist attacks of Sept. 11, 2001, appears in theaters next spring, Tech. Sgt. Bonara Tan may suddenly find he has the most hated elbow in America.

Tan plays an X-ray attendant who checks the carry-on bags of one of the hijackers on United Airlines Flight 93, then clears him to board the plane.

It&#8217;s a tough way to start a movie career. But because Tan was shot from the back, he predicted that only parts of his torso, shoulders, arms, elbow and head are likely to make it into any frame of &#8220;Flight 93,&#8221; a Universal Pictures film due in theaters April 28.

Tan is among dozens of England-based airmen acting as extras in the movie, which is being filmed in London this month. The airmen are playing everything from airport personnel and air traffic controllers to members of the U.S. air defense system, mostly in nonspeaking roles, said Jayne Hardy, a casting executive for the movie.

The film is based on events on the only plane wrested from control of terrorists on Sept. 11.

The flight was hijacked over Ohio, then later crashed in a Pennsylvania field after passengers attacked the armed hijackers and tried to regain control of the aircraft.

The filmmakers have been intent on making the movie as accurate as possible, Hardy said.

To add to the sense of realism, filmmakers wanted to use real air traffic controllers and people with American accents, plus people with military experience to fill out some scenes of the reaction to the hijacking.

Where better to get them than at a nearby American air base?

Three airmen from RAF Lakenheath who might see significant screen time in April are air traffic control and radar experts picked to play the civilian air controllers at the Newark, N.J., airport tower the day of the attacks.

Senior Airman Patrick Boulanger, Staff Sgt. Jeffrey Michaud and Airman Ashley Clark, all of the 48th Operations Support Squadron, said they spent a 12-hour day recently ad-libbing &#8220;air-traffic mumbo jumbo&#8221; in the background as the main actors pretended to react to the news of the attacks. For their efforts, the airmen were paid an average of 150 pounds, or about $270.

The efforts to make the film realistic were staggering, they said, including the use of two controllers who were on duty at the Newark tower the day of the attacks. The controllers, who act as themselves in the scene, gave numerous tips on how to show exactly what happened as they cleared Flight 93 for takeoff, then watched as other planes hit the World Trade Center.

Also adding to the potential accuracy is the Air Force support being lent to &#8220;Flight 93,&#8221; said Lt. Col. Stephen Clutter, an entertainment liaison for the Secretary of the Air Force.

The Air Force has been helping out wherever it can. It has given advice on uniforms and military terms, provided experts from the Northeast Air Defense Sector in the States, and consulted on the military reaction to the attacks, among other things, he said.

Initially, Air Force officials were hesitant to back the film because of an unusual feature &#8212; it doesn&#8217;t have a script. Directed by Paul Greengrass, who also directed &#8220;The Bourne Supremacy,&#8221; the movie will mostly be ad-libbed by the actors and extras, Wyhowska said.

The Air Force decided to back the film when officials became convinced the filmmakers were looking to craft an accurate re-creation of a heroic counterattack by unarmed civilians against determined terrorists, Clutter said.

That decision put people like Boulanger, Michaud, Clark and Tan in front of a rolling camera, in what they said was a slightly peculiar experience.

Pretending to be in shock, talking to planes that weren&#8217;t there, trying repeatedly to look thunderstruck &#8212; these were new experiences, the airmen said. Plus, pretending to be part of the tragic events of the attacks in a realistic setting was slightly unsettling, some said.

But the filming also peeled off some of Hollywood&#8217;s glamour.

You can only looked shocked so many times in a row before the novelty wears off, Boulanger said.