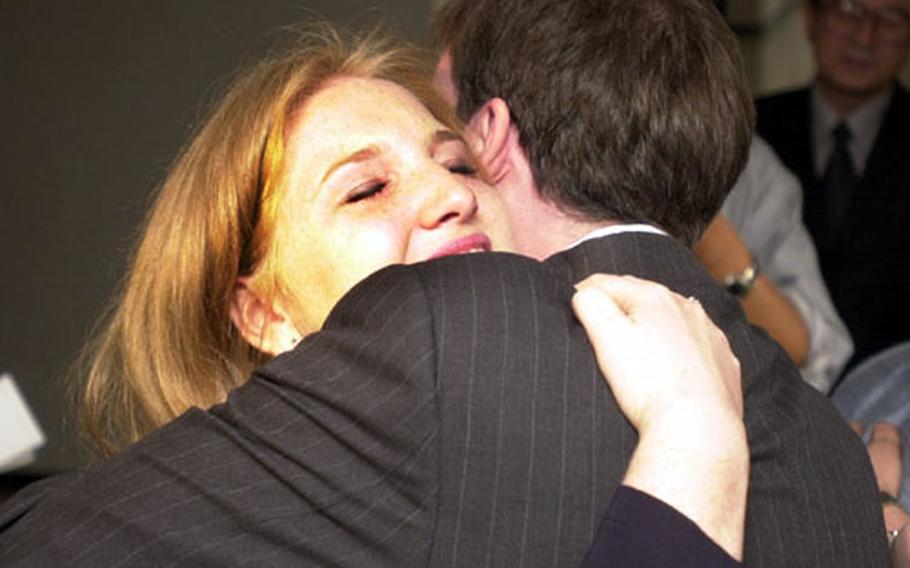 SEOUL &#8212; A three-judge appeals court panel Tuesday upheld the acquittal of a 22-year-old American woman on a charge she stomped to death a fellow American exchange student in a run-down Itaewon motel.

But prosecutor Ham Kyu-yong said he has seven days to file an appeal. Unlike in the United States, prosecutors may appeal an acquittal, first to an appeals court, then to South Korea&#8217;s Supreme Court.

Brendon Carr, one of her attorneys, said the judges accepted many of the arguments his associate presented earlier in court; he called the judgment &#8220;sophisticated.&#8221;

But the suggestion of another suspect again casts doubt on a tangled investigation that produced no clear evidence connecting anyone with the crime scene. Although Snider was charged with unintentionally injuring a person resulting in death, no physical evidence linked her to killing Penich.

In February 2002, in Huntington, W.Va., Snider confessed to killing Penich to agents from the FBI and U.S. Army Criminal Investigation Command (CID). Army agents became involved after numerous U.S. soldiers were identified as having socialized with Snider and Penich at an Itaewon bar the evening before Penich died.

Penich was killed March 18, 2001, at the Kum Sung Motel, a small inn where she, Snider and five other exchange students were staying. Penich&#8217;s jaw was broken and her head and chest were stomped repeatedly, causing her to suffocate, according to Seoul&#8217;s medical examiner.

South Korean police and Army CID agents questioned numerous U.S. soldiers but all were dismissed after no physical evidence linked them to the scene. The case stalled until an Army CID agent, Mark Mansfield, noticed inconsistencies between statements Snider made to police and the crime scene.

After protracted questioning in a Ramada Inn motel room, Snider told the CID and FBI agents she punched Penich in the inn&#8217;s bathroom after Penich tried to take off Snider&#8217;s pants. The investigators said Snider then told them she trampled Penich repeatedly.

During Snider&#8217;s trial, the court balked at accepting that confession. Under South Korean law, confessions must be given to a prosecutor rather than police, to prevent police abuse in obtaining statements.

Snider said later her confession came at her FBI questioner&#8217;s prompting. She said two FBI agents and one CID agent &#8212; working from how they had theorized she killed Jamie &#8212; prompted her with answers, called her a liar and discouraged her from getting an attorney by telling her that would be viewed as uncooperative.

Judge Chon said even if the confession was admissible under South Korean law, the physical evidence and witness accounts don&#8217;t fit. The Kum Sung Motel manager said she saw a white man with blood on his pants come out of the room around the time of the murder, Chon said.

Investigators never recovered Snider&#8217;s shoes from the night of the killing; she said she no longer has them.