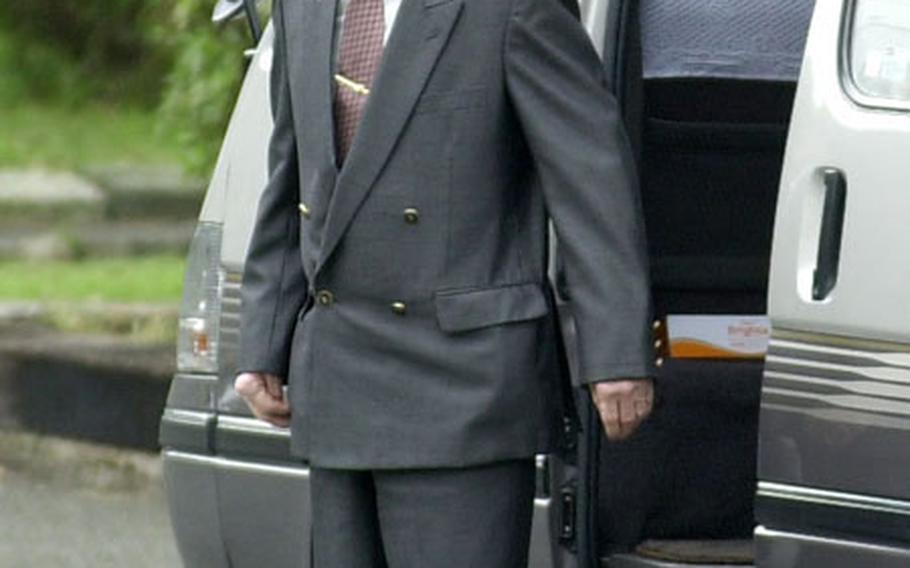 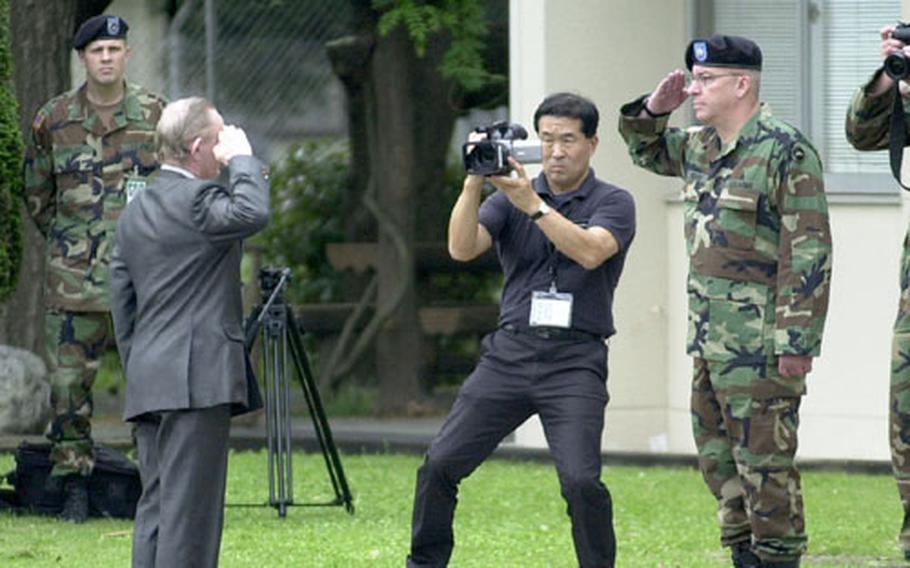 He voluntarily turned himself over to U.S. military control Saturday, ending a whirlwind odyssey that spanned nearly four decades and carried him from North Carolina to communist North Korea. The return also fed a Japanese media frenzy that&#8217;s engulfed the alleged U.S. Army deserter since his arrival here two months ago from Jakarta, Indonesia.

At 10:47 a.m., a van carrying Jenkins and his family entered the main gate at Camp Zama and was met by a military policeman, who directed the driver to the nearby U.S. Army Japan Provost Marshal&#8217;s Office.

After identifying himself, Nigara responded, &#8220;You are now under the control of the U.S. Army. I can assure you that you and your family will be treated with dignity and respect at all times. From this point on, you are about to begin your in-processing in this command. If you will follow me in, you will first meet your company commander, and your family will meet with your sponsors.

The two then entered the building together, where Zama officials outfitted Jenkins in an Army Class B uniform, had him sign the standard paperwork and gave him an advance payment that&#8217;s offered to soldiers in need of financial assistance. Capt. James Culp, his military defense counsel, was present throughout the process.

At the military personnel office, Jenkins received orders returning him to active-duty status, completed an emergency contact form and was offered enrollment in the Servicemembers&#8217; Group Life Insurance program. Identification cards were issued to him, wife Hitomi Soga and their youngest daughter.

Jenkins, 64, faces two counts each of soliciting other servicemembers to desert and encouraging disloyalty, and one count each of desertion and aiding the enemy, said Maj. John Amberg, a U.S. Army Japan spokesman. All are various violations of the Uniform Code of Military Justice.

Jenkins allegedly walked away from his South Korea-based Army post in 1965 and defected to the reclusive, communist nation just north of the Demilitarized Zone. He lived in North Korea for about 39 years and reportedly took part in propaganda broadcasts and anti-American films.

Jenkins came directly to Zama on Saturday from a Tokyo hospital, where he received treatment after undergoing surgery earlier this year in North Korea.

Amberg denied that Jenkins received special treatment during the high-profile surrender, and dismissed speculation that a deal had been struck between the U.S. and Japanese governments.

Amberg said he couldn&#8217;t speculate on any of the actions or choices Sgt. Jenkins has made.

In general, though, he said &#8220;each and every time a deserter returns to Army jurisdiction, whether they&#8217;re apprehended or turn themselves in, the case is dealt with individually, looking at all aspects and all factors. &#8230; So it&#8217;s safe to say no two cases are treated exactly the same. &#8230; I can tell you it&#8217;s always encouraging when a deserter returns to Army jurisdiction.&#8221;

He was reinstated as an E-5 in the Army with nine years and two months of service, Army officials said, the exact status he held the day he was reported absent without leave. His monthly entitlement comes to about $3,300, which includes basic military pay and allowances.

Jenkins and his family will be housed in temporary lodging on Camp Zama, Amberg said.

The charges against him will be reviewed in an Article 32 investigation, said Col. John Dykstra, an international law specialist. Once that&#8217;s completed, the case will be assigned to U.S. Army Japan, the designated convening authority.

The Article 32 inquiry could be waived by Jenkins and his defense counsel, Dykstra said, which would expedite the process. If it reaches a general court-martial, that proceeding would be open to the public.

&#8220;It would be highly speculative to say how long that might take,&#8221; he added. &#8220;A rough guess would be 1-3 months to reach a verdict, and then another two months for the convening authority to sign a final report from the court-martial.&#8221;

Dykstra said Jenkins is not under arrest but cannot leave the post without command permission.

&#8220;Basically, he has the brunt of all facilities on Camp Zama, including the bowling alley, commissary, base exchange and fishing pond.&#8221;

An investigator has not been appointed for the Article 32, Dykstra added. After that&#8217;s completed or waived, the charges can be referred for trial. The military judge would then set a date for the general court-martial.