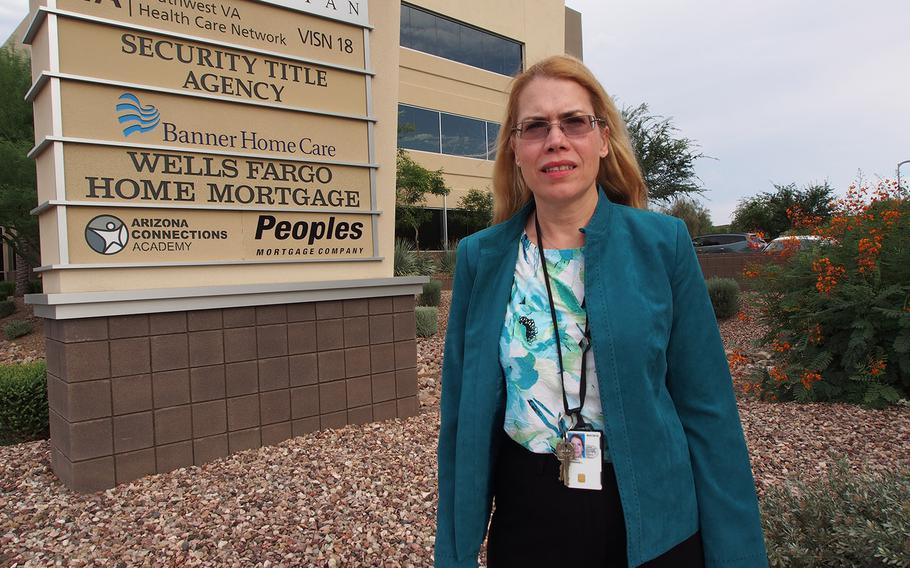 Dr. Katherine Mitchell, a whistleblower who helped uncover a nationwide scandal in veterans' health care, outside her Phoenix VA workplace. Mitchell developed a guide to academic accommodations for disabled veterans after her VA bosses exiled her to an empty clinic in retaliation for reporting patient care problems. (Heath Druzin/Stars and Stripes)

Dr. Katherine Mitchell, a whistleblower who helped uncover a nationwide scandal in veterans' health care, outside her Phoenix VA workplace. Mitchell developed a guide to academic accommodations for disabled veterans after her VA bosses exiled her to an empty clinic in retaliation for reporting patient care problems. (Heath Druzin/Stars and Stripes) 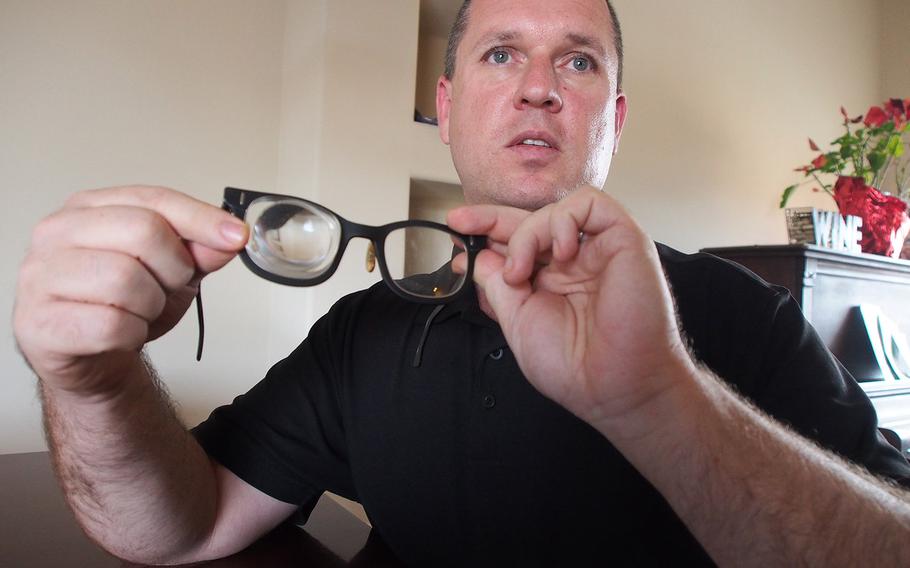 Dan Standage, a legally blind veteran and Director of Disability in Education for Student Veterans of America, displays special glasses that magnify text in books. For the most part, Standage must use audio books, an accommodation he says many professors still resist. (Heath Druzin/Stars and Stripes)

With the rate of suicides increasing within the Phoenix system, she started studying victims’ case files and found a pattern that seemed tragically easy to address: Of four who reported struggling in college, three had not received widely available but little-known academic accommodations for mental health issues, such as post-traumatic stress disorder and traumatic brain injuries.

The fourth was already failing before he received any information.

From her research and collaboration with veterans, Mitchell has drafted a first: a veterans’ guide to reasonable academic accommodation for mental health issues, for use by doctors, VA caseworkers and veterans. With so many returning veterans of the Iraq and Afghanistan wars poised to begin using their GI Bill money for college, Mitchell hopes the next step will be for the VA and veterans service organizations to use the guidelines to educate veterans on their options and help them formulate academic plans.

Academic accommodations are available for a range of disabilities. Students dealing with mental issues from post-traumatic stress and traumatic brain injuries commonly are given additional time to take tests, note-taking assistance, breaks during lectures and tutoring.

Mitchell has submitted the guidelines to Federal Practitioner, a professional journal of the VA, the Department of Defense and U.S. Public Health Service health care workers.

She said that there likely were a number of factors in the Phoenix suicides, but failure in college can compound problems associated with post-traumatic stress and depression.

“Whenever you have academic failure, it helps snowball other stresses in your life,” she said.

Mitchell, who helped uncover the ongoing national Veterans Affairs health care scandal and has testified in front of Congress, was looking at suicide charts when she discovered the wait-time issue. She was working at the empty clinic — where she had been assigned after complaining about patient care problems in the Phoenix VA emergency room — when she found patterns in patient scheduling that reflected the existence of secret wait lists. She and Dr. Samuel Foote blew open a nationwide scandal that cost the Phoenix director, Sharon Helman, her job.

After Mitchell forwarded findings of improper care to the VA’s inspector general’s office, she said she was put on administrative leave and forbidden to look at suicide charts.

The order still stands, she said.

Seeking help not in vets' natureThe Americans with Disabilities Act guarantees anyone with physical or mental disabilities academic accommodations. The disability does not need to be connected to military service, but the student must seek help and register with the campus disability resource center or admissions office. That means they need to know about the benefit in the first place, which has been a major hurdle.

“I think people aren’t aware of it,” Mitchell said.

Dan Standage understands the importance of veterans knowing their academic rights. As a blind former Marine, Standage spent years doing battle with professors to get the help he needed to earn bachelor’s and master’s degrees from the University of Arizona. As director of disability in education for Student Veterans of America, he worked with Mitchell to craft the language of her guide, and he hopes to incorporate it into his group’s outreach efforts.

Veterans need a push to seek help and assurances that they’re not getting special treatment, he said.

Trying to get through school with a disability, though, is “like eating soup with chopsticks,” Standage said. And while many professors seek to help disabled students, Standage said some see accommodations as cheating and need to be reminded of their obligations.

“Disability scares people and that’s because most of the time they’ve never been around it,” he said.

A tool for achievementIraq veteran Gary Saleh, 29, who was medically retired after multiple traumatic brain injuries, said he arrived at Cochese Community College in Sierra Vista, Ariz., determined to better himself but unsure how he would overcome his trouble with concentration, memory problems and anxiety. Fortunately for him, another student asked a professor about academic accommodations in front of the class.

“I had no idea that college even offered that,” Saleh said.

Uneasy at first with asking for help, he waited another week before deciding to check on accommodations. Now in the second semester of a two-year associate degree in cybersecurity, he gets extra time on tests, is allowed to take breaks as needed and can record lectures.

“These tools are what helps me achieve what I need to achieve,” he said. “Every once in a while, everyone needs a little help.”

As Mitchell sees it, beyond being an issue of fairness, it’s also a medical concern, and she hopes going over her guidelines with incoming veterans will become a normal part of the doctor-patient relationship at the VA.

Veterans are often older than their classmates and are coming out of a very different environment, raising their anxiety about college. The vast majority of veterans who use academic accommodations will not have suicidal thoughts. However, given the high rates of post-traumatic stress disorder and traumatic brain injuries among returning veterans and the ongoing suicide crisis in the military ranks, Mitchell said anything that can reduce stress and improve mental health should be welcomed.

“I can’t prevent all suicides,” she said, “but what you do for anyone who is struggling with depression or suicidal thoughts is you try and stack the cards in their favor.”