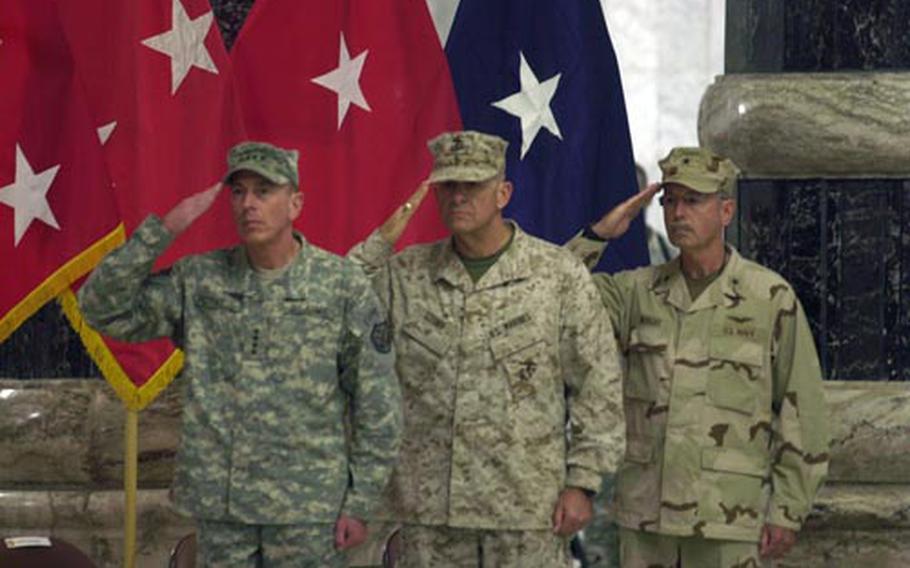 BAGHDAD &#8212; Lauded as the man who has begun the process of replacing the shocking images of Abu Ghraib with those of classrooms and other reforms, Maj. Gen. Douglas Stone handed over command of Task Force 134, the U.S. military&#8217;s detainee system, in Iraq on Friday.

Stone &#8212; who will get a third star and become head of Marine Forces Reserve and Marine Forces North &#8212; was replaced by Rear Adm. Garland Wright, who has served as Stone&#8217;s deputy commander since August.

"What we do here in Detainee Operations is not perfect," Stone said in remarks to a crowd of Iraqi and American dignitaries. "But we are building toward long-term security. It is not simply detention; it is engagement. It is not retribution; it is reconciliation."

Stone took over a military detention system in April 2007 that was known mainly by the legacy of abuse at Abu Ghraib, the notorious prison west of Baghdad that was given back to the Iraqis in 2006.

The detention facilities had become a breeding ground for extremism, hardening the radical beliefs of those held, U.S. officials have acknowledged.

But under Stone, the military&#8217;s new focus on counter-insurgency operations was brought to the detention system, said Gen. David Petraeus, commander of U.S. forces in Iraq.

"[Stone] revolutionized the way we perform detainee operations in Iraq,""Petraeus said. Calling Stone a man of "big ideas," Petraeus said "his biggest idea was counter-insurgency inside the wire [of the detention facilities], because that was where the enemy was conducting its insurgency as well."

Among the reforms were separating the "irreconcilables from the reconcilables," then releasing larger numbers of those who were deemed low security threats. Detainees are offered vocational and classroom education, and reintegration into tribes and communities is stressed as a better long-term goal than confinement.

Still, U.S. commanders acknowledge critics of the system, which holds some 22,000 detainees, largely in Camp Cropper and Camp Bucca.

Detainees are taken too often, they are deprived of due process and held for long periods of time, human rights organizations say.

In his farewell remarks, Stone credited the members of the command, "whose every action is subject to the greatest scrutiny, "where everyone is watching, all the time."

In brief remarks, Wright, the incoming commander, said one of his goals was to cement the transformation of detention facilities from "schools and incubators for terrorists."

"We are on the right path,"" he said. "There will be future challenges, but we will face them with great courage."