Absentee voting should be easier for servicemembers in 2012 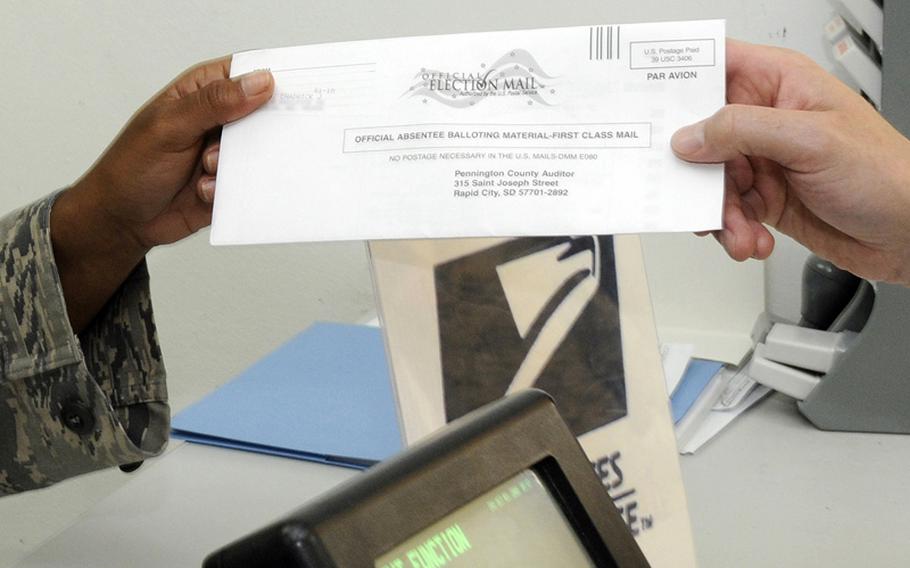 However, overseas voting advocacy groups say more still needs to be done to help those citizens participate in all elections.

A new study released by the Pew Center on the States said that all but four states have adjusted their laws and deadlines to ensure that ballots are sent to absentee voters at least 45 days before the election, ensuring they have adequate time to fill out and return the documents.

For the last decade, late-arriving ballots have been the top reason that absentee votes are discounted by state election officials, according to data from the Election Assistance Commission. In 2009, Pew researchers found that 26 states did not give overseas citizens enough time to submit their absentee votes, leading to thousands of discarded ballots.

"But the vast majority of states have enacted reforms since then," said Sean Greene, project manager of election initiatives for the Pew Center. "Overseas voters are in a better position now than they were in any previous elections."

In 2008, only 20 states allowed overseas voters to receive blank ballots via fax or email. This year, all 50 states and the District of Columbia will allow those citizens to get emailed ballots.

That's a critical improvement, according to Bob Carey, director of the Federal Voting Assistance Program.

"In my time in the military, I've had several different addresses," he said. "But I've always had the same [email address]. That's never going to change."

The Pew study was released Friday at the annual Overseas Vote Foundation's annual summit. Last year, a survey by the group found that nearly one-third of overseas voters who wanted to participate in the 2010 national elections could not successfully cast a ballot - because of mismailed paperwork, too-tight deadlines and other common frustrations.

That was actually an improvement over 2008. OVF officials surveying after that election found that nearly half of overseas citizens who requested ballots did not successfully vote.

OVF and Pew officials said that more can be done to help overseas voters, particularly in the four states that still have unworkable mailing deadlines for absentee ballots: Alaska, California, New York and West Virginia.

Pew researchers noted that Alabama, Alaska, Virginia and Wisconsin still require a notary or witness to validate the ballots before they are mailed back, another significant obstacle to participation. And 16 states do not recognize the federal write-in absentee ballot for state and local contests, even though that document is designed to be a ballot of last-resort for any election.

Speakers at the summit also cautioned against rapid adoption of online voting tools beyond the blank ballots, noting that many concerns still exist with how those votes would be counted and secured.

Nearly 321,000 troops overseas and in the United States successfully cast absentee ballots in the 2008 presidential election, according to the Election Assistance Commission.

For more information on registering or obtaining a ballot for this year's elections, visit fvap.gov.