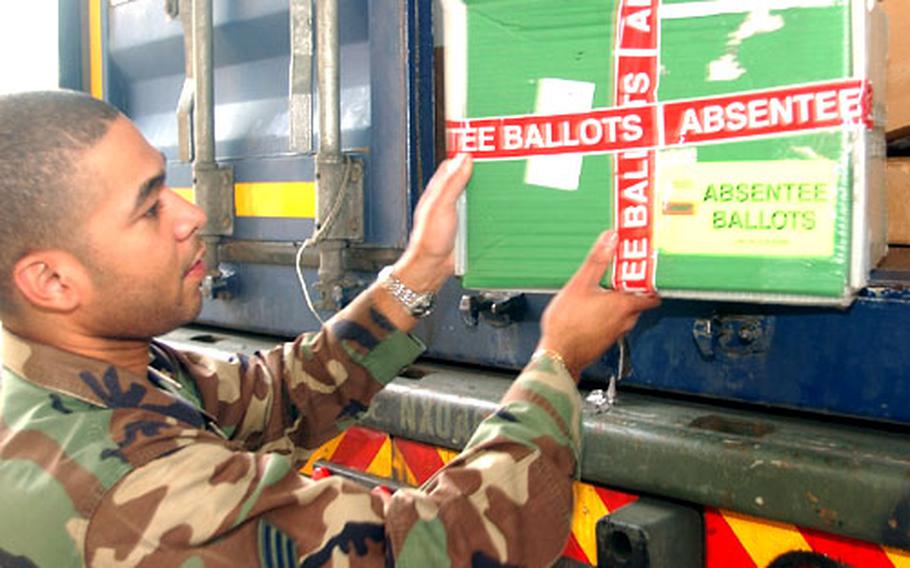 KAISERSLAUTERN, Germany - With the general election just days away, less than half of the U.S. troops, Defense Department civilians and family members living in Europe have mailed in absentee ballots, according to U.S. military officials.

To date, the military postal system has mailed about 68,000 ballots back to the States, which accounts for about 45 percent of the 150,000 voting-age U.S. identification-card holders living in Europe.

But the military is making a last-ditch effort to get absentee votes out in hope of preventing problems that left up to one-third of overseas military votes uncounted four years ago.

Starting Monday, every absentee ballot will be sent via express mail - at no cost to the customer, said Maj. Brad Hammant, installation voting assistance officer for Ramstein Air Base and all other 435th Air Base Wing facilities.

In 2000, 30 percent of military voters who requested ballots didn't get them in time to vote, according to the Pentagon. The handling of military ballots was a major issue in Florida in 2000, when election officials rejected hundreds of military absentee ballots, many because they lacked postmarks or signatures.

This year, military postal workers have developed a special system to ensure that voting materials get to voters and completed ballots are returned in a timely manner, with postmarks and signatures, Hammant said.

"There were some problems with the military postal system processes four years ago, and it was a significant part of the overall problems" with the election, Hammant said.

New postal measures include immediate post-marking of all ballots, separating ballots from other mail and specially marking mail trays filled with balloting material. Plus, every unit must have a voting assistance officer and one voting assistance counselor for every 40 military members, Hammant said.

"I've never seen such a full-court press for people to participate in the process," he said.

However, anecdotal evidence indicates that plenty of troops missed out on casting their ballots this year.

Pfc. Aaron O'Hara, posted at Logistics Support Area Anaconda, near Balad, Iraq, said he didn't vote. His squad leader explained the process but it was too much effort to apply for a ballot, O'Hara said.

"I guess I'm too lazy," said O'Hara, of Company B, 84th Engineer Battalion.

Others had trouble getting their absentee ballots in the field.

Spc. Jonathan Taisacan of Saipan said he couldn't get an absentee ballot when he applied to the United States. So he won't be voting.

In Europe, complications still exist despite the special mail handling. In several states, court cases - mostly over whether candidate Ralph Nader will appear on ballots - and other glitches in the system have hung up the printing and mailing of absentee ballots.

"There are hundreds of people I'm responsible for who didn't get their ballot yet," Hammant said.

And military postal workers and unit voting advisers sometimes struggle to comply with the voting regulations in each of the 50 states, counties and, at times, townships.

"All of them do it a little differently," Hammant said. "It's a real challenge for the postal guys."

As of Thursday, military mail handlers in U.S. Air Forces in Europe had mailed processed about 34,000 absentee ballots, including those from civilians and family members. Air Force postal workers sent an additional 2,000 ballots to people who have changed addresses, deployed, or have improperly listed their mailing information.

The Navy in Europe has sent in about 6,700 absentee ballots, according to Lt. Cmdr. Lisa Braun, commander, Navy Region Europe spokeswoman.

The Army has mailed 27,423 ballots back to the States, according to Michael Tolzmann, spokesman for U.S. Army Europe.

Of USAREUR's 62,000 active-duty troops, about 15,500 are deployed. Figures on how many of those deployed troops may have sent in absentee ballots was not available.

The overall military absentee balloting process was criticized anew this week when two Democratic House members accused the Pentagon of failing to meet its responsibility of helping overseas voters get their ballots out, according to an Associated Press report.

About 2.7 million military members and their dependents overseas worldwide are eligible to vote by absentee ballot.

Rep. Henry Waxman, D-Calif., and Rep. Carolyn Maloney, D-N.Y., on Tuesday asked the Government Accountability Office to investigate problems in the absentee voting system. They cited numerous complications, including a short-lived Internet voting project that was abandoned because of security concerns; a reported shortage of absentee ballot request forms; e-mail and fax balloting systems the Democrats said were being handled by a private contractor with questionable experience; and blockage of a federal government Web site that Americans living abroad can use to request absentee ballots, because of hacking concerns, the AP reported.

That Web site, has since been restored, and voters who requested a ballot but never received one can use the On-line Federal Write-In Absentee Ballot. That ballot, which includes federal offices only, is available at www.fvap.gov/pubs/onlinefwab.html.

"We've been trying to discourage procrastination, but most states will accept ballots if they are postmarked by Election Day," Hammant said. "Mail them now. Why wait?"

Some absentee voters get more time

Some states have extended the deadline to receive absentee ballots, allowing voters to mail ballots as late as Election Day, Nov. 2.

Some states will accept ballots up to Nov. 12. Voters should check with their home state election officials or their military voting assistance officer for information.