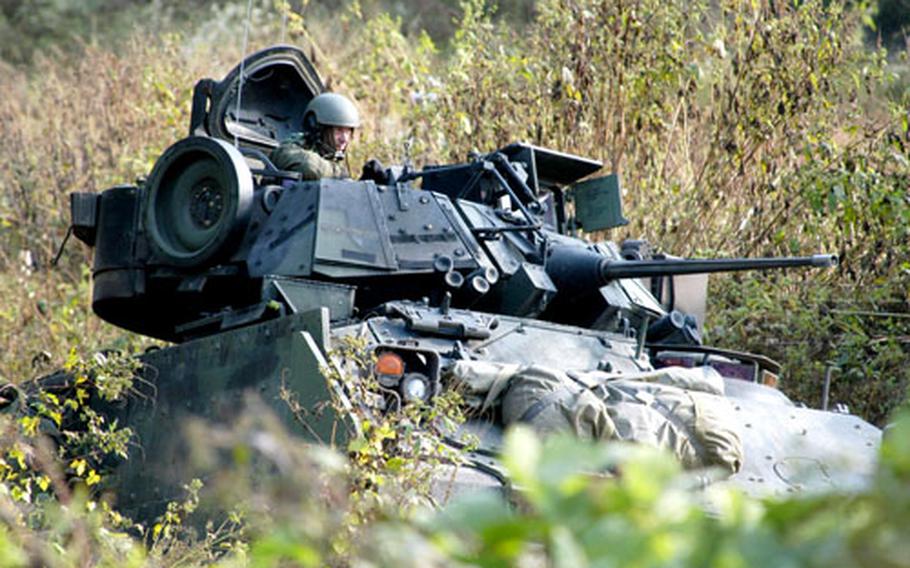 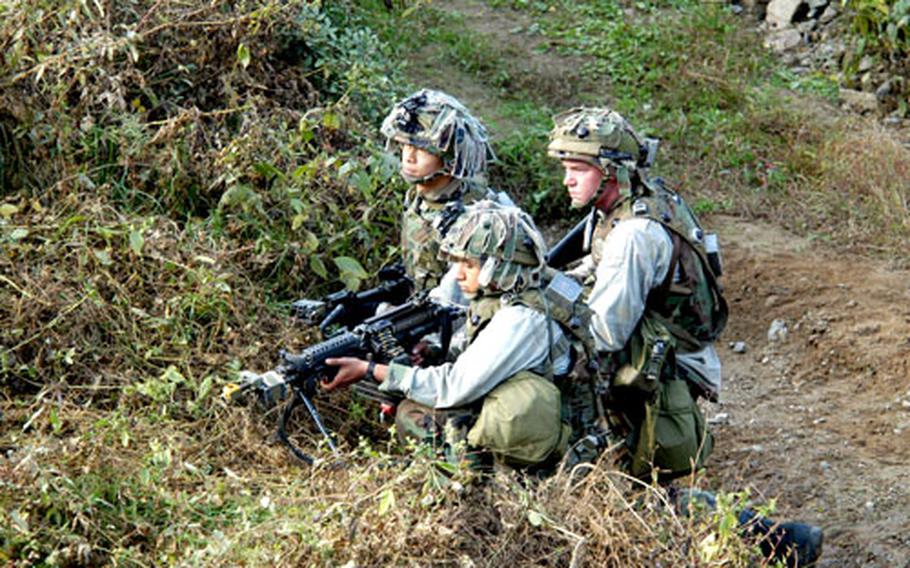 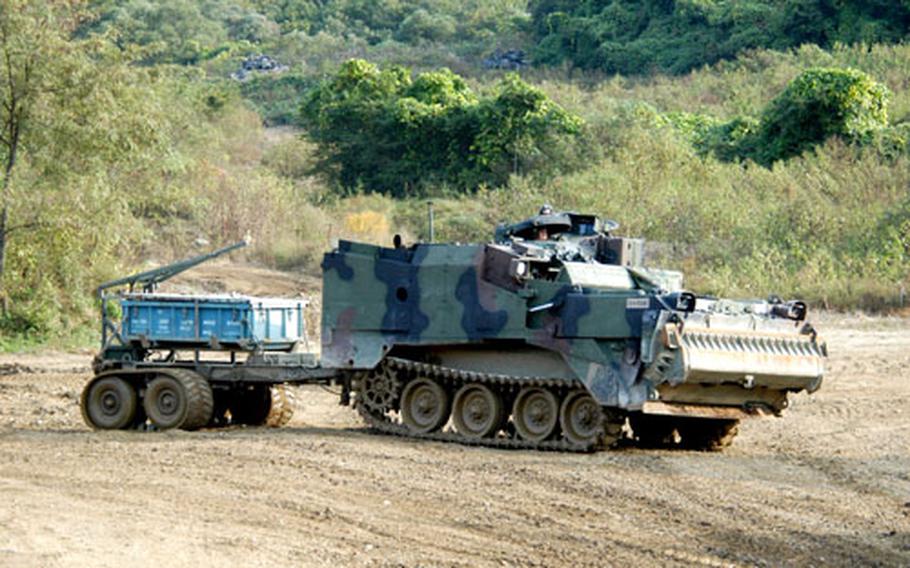 A Mine Clearing Line Charge (MICLIC) moves into position during a simulated attack. (Seth Robson / S&S) 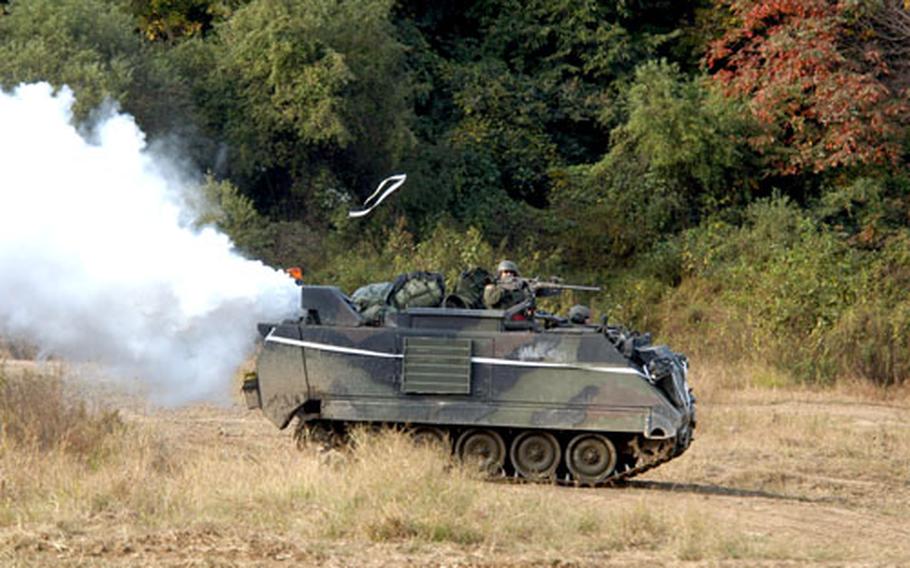 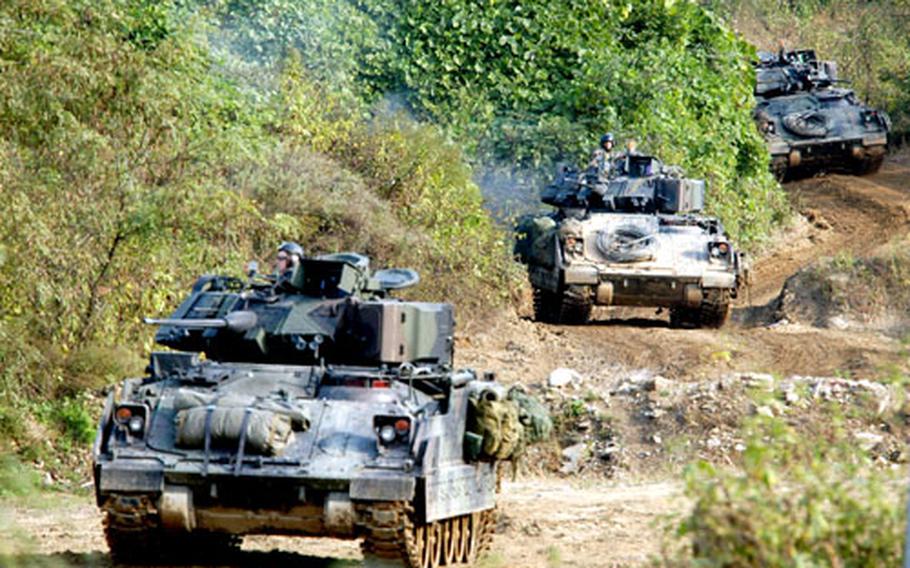 Operations officer Maj. John Strange, 35, of Leavenworth, Kan., said it was the largest such exercise since the unit reorganized in 2004, adding Bradleys and engineers to its tanks.

The changes were part of a larger transformation of the 2nd Infantry Division in South Korea over the past year, which saw the creation of a 1st Heavy Brigade Combat Team made up of Task Force 1-72 and another main fighting unit, Task Force 2nd Battalion, 9th Infantry Regiment.

Strange said 2-9 will conduct a similar exercise in February.

&#8220;This is definitely an exercise in which we have to re-evaluate how we have done things in the past. Our tactical SOPs (standard operating procedures) are all geared toward an armor-pure battalion,&#8221; he said. &#8220;We have always been prepared to fight as a combined arms team but the assets have never been organic to us.&#8221;

The exercise began in early morning when 1-72 sent scouts to reconnoiter a sector of the range where an opposing force &#8212; soldiers from 2-9&#8217;s Company A &#8212; had assumed defensive positions.

Scouts found wire obstacles and a minefield blocking the narrow approach to the enemy, so engineers were sent to cut the wires and clear a path in the dark. Shortly after dawn 1-72&#8217;s Company A and Company C, under cover of a simulated smoke barrage, moved down a valley toward the enemy.

Tanks, Bradleys, Humvees and M-113 Armored Personnel Carriers soon were carving deep tracks across the muddy range, maneuvering into fighting positions. At one stage a Bradley flipped over on a muddy trail, injuring two soldiers. A wrecker had to haul it out before the operation could proceed.

During a lull, Pfc. Alec MacDougall, an engineer with Company E, 1-72, stood beside the Bradley he was driving. &#8220;Today is a joint effort between engineers and tankers,&#8221; he said, adding that his engineers had marked a clear path through one of several minefields so the vehicles could pass.

Company E dismount squad leader Sgt. Anthony Tedder, 29, of Stateville, N.C., said he was expecting to mark more lanes after a mine clearing line charge breach of another simulated minefield and then moving on to manually breach another obstacle.

Tedder, who&#8217;s been in South Korea almost a year, said the exercise was the biggest training event he&#8217;d been on. Engineers in his unit joined 1-72 when the 2nd Engineer Battalion inactivated, he said.

Strange said the exercise differed from traditional company team lane training, in which the two companies execute the same skills over the same terrain.

&#8220;What is often not worked is consolidation, reorganization and preparing for the next operation,&#8221; he said. &#8220;A mile down the road there is going to be a simulated downed aircraft. They have to send a platoon to secure it,&#8221; he said. &#8220;They will think it is a friendly aircraft but when they get there it will be full of enemy soldiers. And another element will be sent back to enter and clear a building.&#8221;