Above and beyond: Former Marine to receive Medal of Honor Thursday 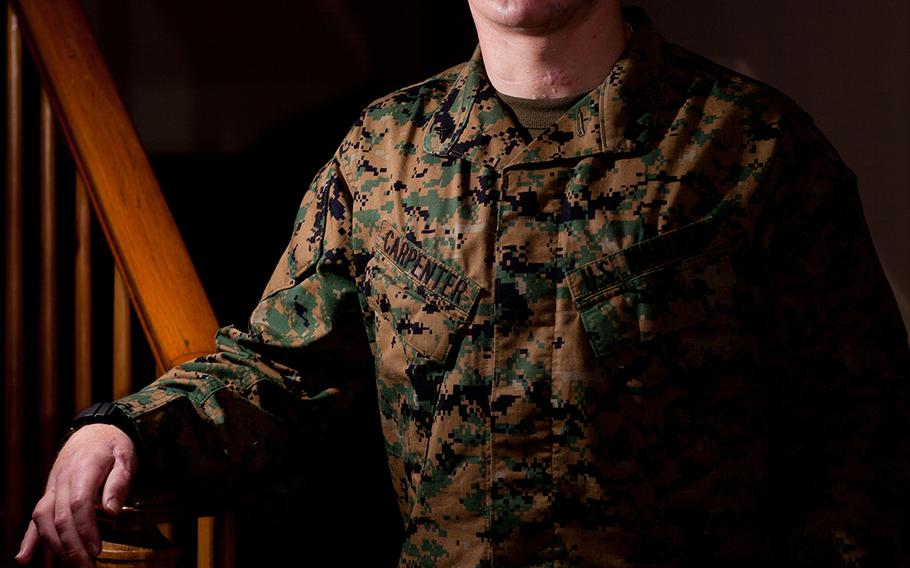 Lance Cpl. Kyle Carpenter takes part in the first corporals course for wounded warriors at the Walter Reed National Military Medical Center Bethesda, Md., on Jan. 12, 2012. Carpenter is to receive the Medal of Honor at the White House on June 19, 2014. (Daniel A. Wetzel/U.S. Marine Corps)

WASHINGTON — Marine Lance Cpls. Kyle Carpenter and Nicholas Eufrazio were standing watch on the roof of a mud and timber building being used as the command center at Patrol Base Dakota, in the Marjah district of Helmand province.

Their squad was pushing south into Taliban strongholds, working to set up patrol bases and establish a stronger U.S. Marine presence in the volatile region.

One landed on the roof. Rather than trying to escape the blast or shield himself, Carpenter dove on top of the grenade to protect his comrade.

“His total disregard for his own personal safety distinguishes his conduct above and beyond the call of duty,” according to the Marine Corps.

Cpl. William “Kyle” Carpenter, now medically retired, will be at the White House on Thursday to receive the Medal of Honor — the nation’s highest award for military valor — for his actions in Afghanistan.

Eufrazio was severely wounded and suffered a shrapnel injury to his head from the grenade, but he survived the attack.

Carpenter doesn’t remember much about what happened before the grenade detonated, but he does recall thinking afterward that he wasn’t going to survive.

“When I close my eyes, I can still feel the warm blood pouring out of me onto my skin and fading out of consciousness with my the final thought of ‘I’m going to die’,” Carpenter wrote on Facebook last year on the third anniversary of the attack.

Carpenter was close to death on several occasions after sustaining a skull fracture, multiple facial fractures, the loss of a third of his lower jaw, a collapsed right lung and multiple injuries to his arms and legs. He also lost his right eye.

Carpenter had to be resuscitated in the medevac helicopter that came to get him. Upon arriving at Camp Bastion, he was in such bad shape that medical personnel initially labeled him PEA — “patient expired on arrival.” He later flatlined while recovering at Walter Reed National Medical Center.

“The enemy killed me [but] I came back,” Carpenter said in a Defense Department video.

Carpenter’s recovery was arduous. He had dozens of surgeries over the next 2 ½ years, including brain surgery.

“Going from toting a machine gun in Afghanistan … to using a bed pan, and I can’t even put my own socks on — that was hard to kind of suck it up,” Carpenter said, according to a Marine Corps news release.

But Carpenter bounced back. Last year, he ran the Marine Corps Marathon and posted a time of 4:28:42, according to the “Operation Kyle” Facebook page, which was created by his supporters. He has also skydived.

“I won’t ever quit. I am just getting started,” Carpenter said in the DOD video.

In July 2013, Carpenter — who was born in the Jackson, Miss., suburb of Flowood and went to high school in Batesburg, S.C. — was medically retired, and he is a full-time student at the University of South Carolina in Columbia.

He has some advice for his admirers.

“Please take it from me … enjoy every day to the fullest, don’t take life too seriously, always try to make it count, appreciate the small and simple things, be kind and help others, let the ones you love always know you love them and when things get hard, trust there is a bigger plan and that you will be stronger for it,” he wrote on Facebook.

Carpenter will be the eighth living recipient of the Medal of Honor for actions in Iraq or Afghanistan. Besides Carpenter, only 14 servicemembers who fought in those wars have received the award. Still, Carpenter doesn’t consider himself to be more heroic than other Marines.

“As many firefights and instances where there’s been opportunity, Marines have stepped up to the plate — not only in Iraq and Afghanistan but since the beginning of our country,” Carpenter said, according to the Marine Corps news release. “I truly feel like I’m on an even playing field.”