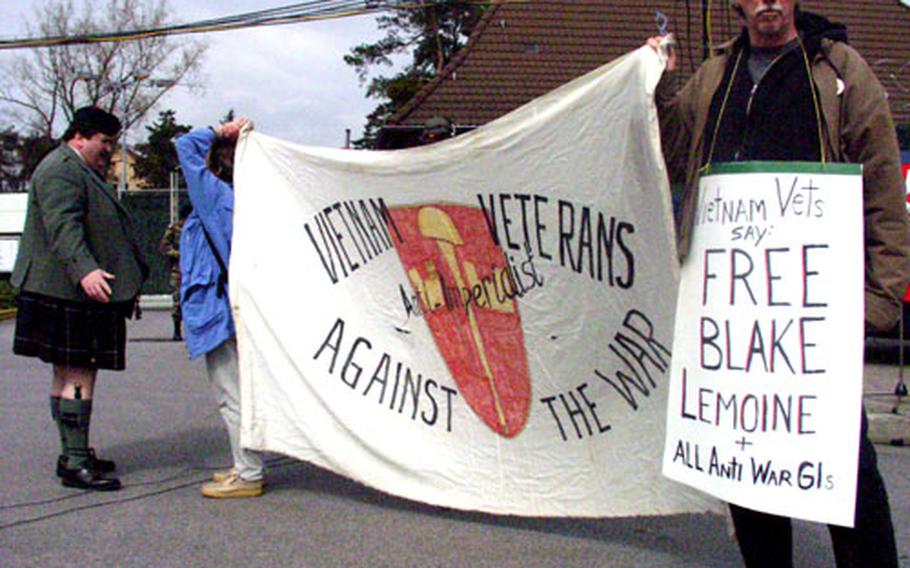 MANNHEIM, Germany &#8212; About 40 protesters gathered outside Coleman Barracks Sunday afternoon with the unlikely goal of getting former Army Spc. Blake Lemoine released from his seven-month sentence at the facility.

The protest, which attracted both Germans and Americans, was largely peaceful and did not result in any arrests, as of press time.

German police and U.S. military police were on hand just in case the event got out of hand.

&#8220;Blake Lemoine is literally one of the thousands in the military who are resisting the war in Iraq,&#8221; said Dave Blalock with Vietnam Veterans Against the War. &#8220;We view him as a hero in a sense. The military should release him. He served his time in the war.&#8221;

In late March, Lemoine, who said he is a pagan priest, was convicted of willfully disobeying orders, sentenced to seven months confinement, reduced to the rank of private and given a bad-conduct discharge. Lemoine voluntarily joined the Army in 2002.

Lemoine, who was with the 596th Maintenance Company on Kelley Barracks, Germany, testified in court that from January through February, he decided he would just sit at a desk near the commander&#8217;s office instead of working, a decision he made after grappling with personal and religious issues against the war in Iraq.

Lemoine, 23, began a work strike after sending his chain of command a letter announcing all the reasons he should be allowed to quit the Army, including his religious beliefs and rituals. The Army determined that he did not meet the requirements for conscientious objector status.

During his court-martial, Lemoine explained that while deployed to Iraq from May 2003 to May 2004, he realized he did not like working with U.S. Army troops. He claimed that racism is widespread in the military, with troops encouraged by command to treat civilian Arabs poorly. He also described several accounts of animal cruelty and derogatory name-calling.

Alayna Lemoine, Blake&#8217;s wife, attended Sunday&#8217;s protest after visiting her husband for an hour. Her husband had ended a self-imposed hunger strike, she said.

Summers&#8217; comments were amplified by the public address system he used.