Aboard the Blue Ridge, chatting and chewing with the defense chief 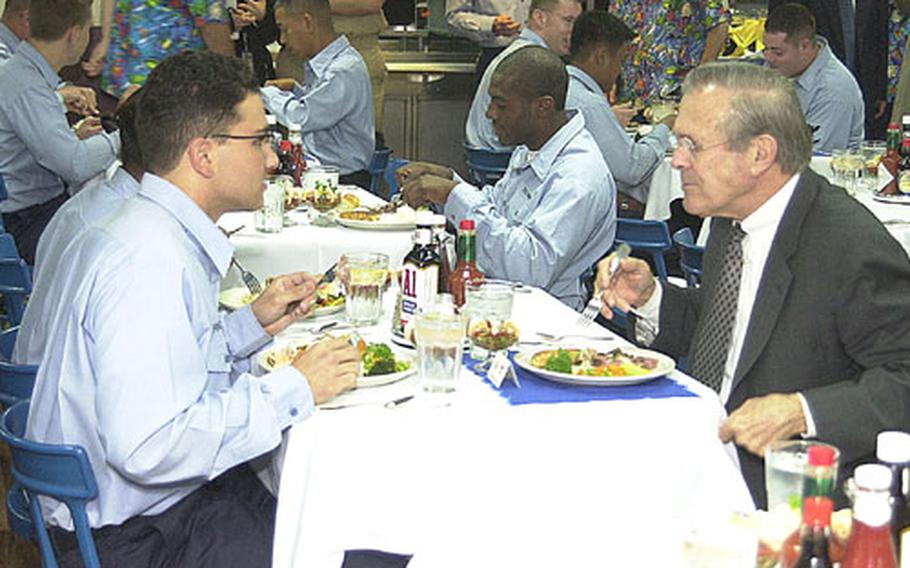 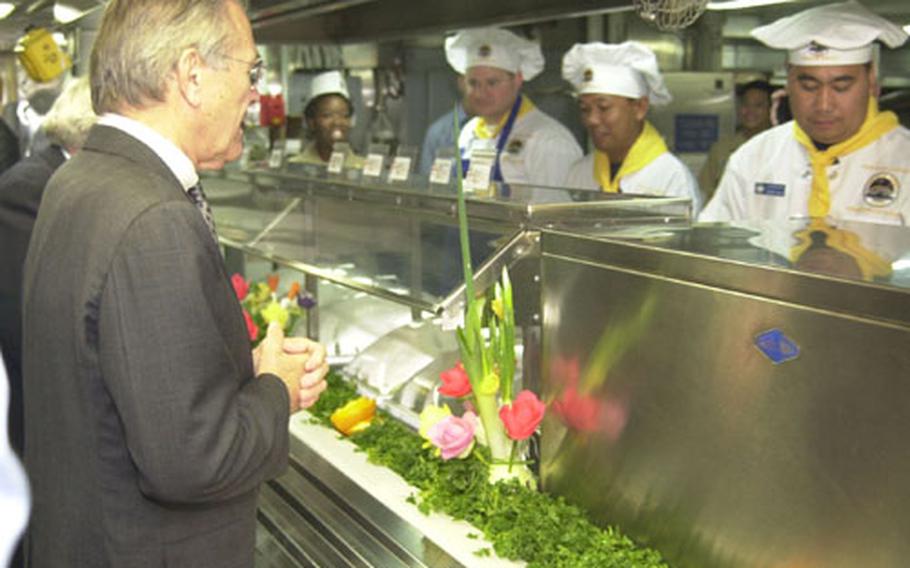 YOKOSUKA NAVAL BASE, Japan &#8212; Defense Secretary Donald Rumsfeld took his tray of salmon and broccoli and sat down at the mess-deck table. Everything was quiet, except for the turquoise, fish-print Hawaiian shirts worn on special occasions by the mess attendants.

It was a historic moment for the crew of the USS Blue Ridge, the first time a defense secretary, or anyone of such exalted rank, had visited the ship since it was put to sea, 33 years and one day before, according to Navy journalist Dino Buchanan.

The Blue Ridge had returned just one day before from a cruise to Hong Kong and Guam, where it provided security during President Bush&#8217;s recent visit to Asia. Its top officers had known for weeks that Rumsfeld would be visiting during his trip to Japan and South Korea for talks with foreign affairs and defense officials.

But Seaman Shawntavia Keaton, 21, learned just hours before Rumsfeld&#8217;s arrival on the ship Saturday afternoon that she&#8217;d soon be sitting at his table and chatting over shrimp cocktails.

Rumsfeld, whose reputation tends toward the brusque, was quite &#8220;warm,&#8221; Keaton said, and easy to converse with. Shortly after, the quiet that had engulfed the mess deck turned to hubbub, with scores of troops and lots of brass, including Ambassador Howard Baker, two vice admirals, one three-star general and too many colonels and captains to count, chatting about the weather and other matters.

Rumsfeld asked about shipboard life, the sailors&#8217; jobs and some of the ports they&#8217;d visited, Keaton said.

Petty Officer 3rd Class Andy Frazier, 22, and another sailor of the quarter assigned to Rumsfeld&#8217;s table, decided to ask the defense secretary some questions: Was it true he had tested the B-1 bomber when he was in the Navy, and why did he think the U.S. military had proved mightier than that of the former Soviet Union?

Rumsfeld said he had indeed tested the B-1 bomber and that the United States had become the world&#8217;s only superpower through &#8220;perserverence and the benefit of a free economy,&#8221; Frazier said.

Rumsfeld finished his lunch quickly and posed for pictures with the troops before heading to a podium and making a brief speech. He thanked them and reiterated the Bush administration&#8217;s resolve to rebuild and help democratize Iraq, despite &#8220;some folks trying to take that country back for Saddam Hussein.&#8221;

He took a handful of questions: Would the Navy in Japan increase or decrease, one sailor asked. It would likely increase, Rumsfeld said, because of the region&#8217;s strategic and economic importance. He predicted no further Navy downsizing, although he said some skills held by those in the National Guard and Reserves should be active duty and vice-versa.

Why were top enlisted people forced to retire so early, another sailor asked.

&#8220;Damned if I know,&#8221; said Rumsfeld, who, at 71 years old, is the oldest secretary of defense in U.S. history. He also has been the defense department&#8217;s youngest secretary, when he held that position in the Ford administration during the mid-1970s.

Responding to a question about the fate of the aging USS Kitty Hawk, a controversial issue in Japan, where some citizens and government officials staunchly oppose any new nuclear-powered carrier, Rumsfeld was diplomatic. The Kitty Hawk would be decommissioned &#8212; &#8220;Eventually, we all get decommissioned,&#8221; he said &#8212; but that won&#8217;t happen for several years. &#8220;Between now and then, they&#8217;ll figure that out,&#8221; he said.

Rumsfeld got a big round of applause before taking a brief tour of the ship. Then, in a convoy of nine vehicles, with two ambulances bringing up the rear, he drove away to a helicopter taking him for a visit with troops at Yokota Air Base.

On Sunday, he was to visit Kadena Air Base on Okinawa and then head to Seoul for talks with government officials there before returning to Washington. The trip, Rumsfeld&#8217;s first to east Asia since Bush appointed him defense secretary, was to encompass talks regarding Iraq, North Korea and other defense matters, including the realignment of U.S. troops in Japan and South Korea.

Why Rumsfeld took the time to visit sailors, soldiers and airmen on the 7th Fleet&#8217;s flagship remained unclear, although it could have been, as one Navy captain said to another: &#8220;He never gets to see real sailors or soldiers. So this is wonderful.&#8221;

The troops said they enjoyed it, too, even the ones whose food grew cold while they sat patiently in their seats, waiting for visitors to arrive.