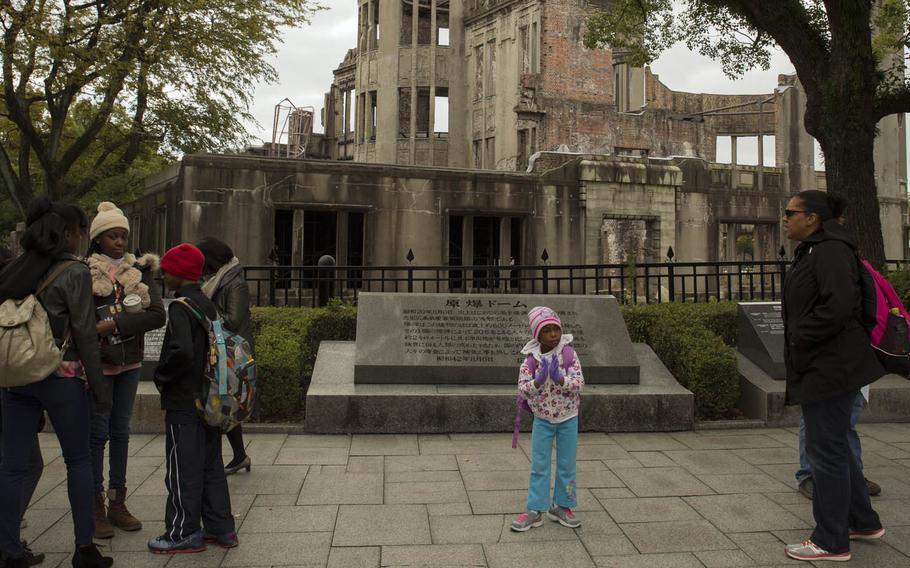 Visitors from Marine Corps Air Station Iwakuni, Japan, tour the Hiroshima Peace Memorial in December. President Barack Obama will travel to Hiroshima this month, making the first visit by a sitting U.S. president to the site where the U.S. first dropped an atomic bomb in 1945. (Aaron Henson/U.S. Marine Corps)

“His visit to Hiroshima will be an opportunity to witness firsthand the consequences of nuclear bombing, which will be a strong demonstration to the world to make a world without nuclear weapons,” Abe said in remarks transcribed from a Tuesday news conference. “Together with President Obama, I will do my utmost to realize a world without nuclear weapons.”

The White House announced this week that Obama will go to Hiroshima later this month after attending the Group of Seven summit in Ise-Shima. He will become the first sitting U.S. president to visit the city where 140,000 people died in one of World War II’s final acts.

“I welcome President Obama’s visit to Hiroshima with all my heart,” said Abe, who also lauded the U.S. leader for consistently urging the world to abolish nuclear weapons.

“It is an extremely significant and historic event to promote international discussions to achieve a world without nuclear weapons,” he said.

Hiromu Morishita, 85, who survived the bombing, has high expectations for Obama’s visit.

“His visit to the peace memorial museum will be an opportunity to see and feel firsthand the consequences of nuclear bombing, which I hope will further strengthen his commitment in abolishing nuclear weapons,” Morishita said.

“Atomic bombs were said to have been used to quickly end the war. Yet, today, 70 years after the war, the world situation is getting severe with threats of further proliferation of nuclear weapons, such as in North Korea and even to terrorists,” he said. “We, the atomic bomb survivors, are all getting old and we will be soon leaving this world, but younger people and future generations have to continue to live with the fear of nuclear weapons. We must get rid of nuclear weapons from the earth at all costs.”