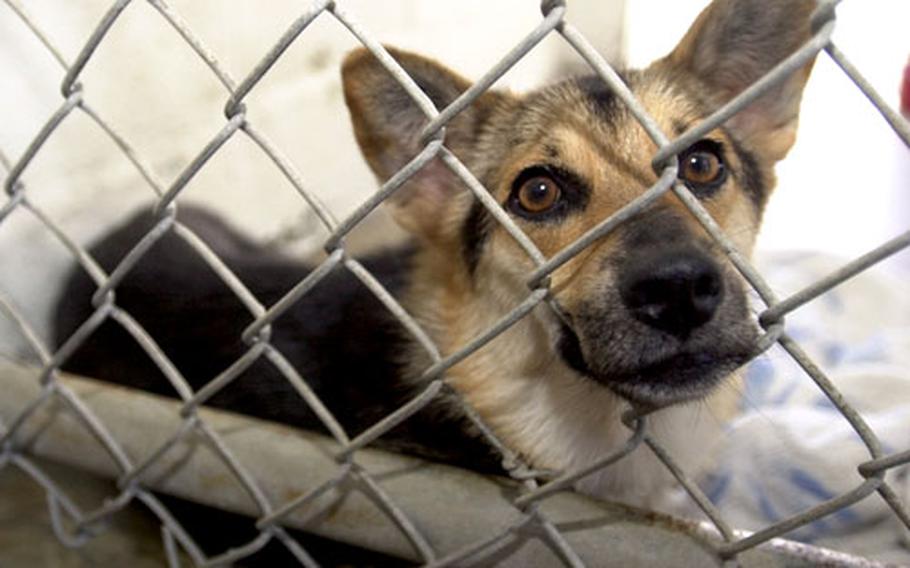 Military police from a Marine Corps base brought this stray shepherd mix to the Karine Kennels shelter on July 10, kennel officials said. As of Friday, he was available for adoption. (Cindy Fisher / S&S)

OKINAWA &#8212; Okinawa has one of the highest per-capita stray animal populations in Japan, and U.S. servicemembers may play some role in the problem, some animal rescue workers say.

&#8220;We have found animals that we knew were dumped by English-speaking owners because the dogs responded to English commands,&#8221; said Liz Rouse, founder of the Okinawa American Animal Rescue Shelter. She said American pet owners are part of the stray population problem.

However, Shimabukuro said he doesn&#8217;t believe the U.S. military contributes to the problem.

Members of the military community here own about 9,300 cats and dogs, according to Kadena Veterinary Clinic files.

The OAARS facility is a no-kill shelter that houses up to 35 dogs. Many more dogs and cats are fostered by the organization&#8217;s approximately 30 volunteers, said Rouse, who owns nine dogs and three cats.

The shelter, which is at its maximum capacity, receives more animals during the summer, which is the permanent-change-of-duty station season, Rouse said.

&#8220;People wait to [the] last minute before they are leaving to try and find a home for a pet that they aren&#8217;t taking with them,&#8221; she said, adding that OAARS volunteers are hard-pressed to find suitable homes on such short notice.

Tracy Perez, animal health care manager for Karing Kennels on Kadena Air Base, said Friday that summer is a peak period for stray-animal roundups on military bases as well.

But, Perez said, other peak periods for leaving pets behind are spring break and Christmas.

More than 150 cats and dogs are brought to the shelter portion of Karing Kennels each month.

In 2005, Animal Control personnel and military police captured 1,050 strays on Marine Corps bases and Kadena Air Base, she said. They account for about 30 percent of the animals brought to the shelter.

The rest are strays collected on and off base by military members. Any individual trying to bring animals to the shelter has to pay the turn-in fees, Perez said.

Once animals find their way to Karing Kennels, workers try to find their owners or adopt them out.

Due to medical reasons, aggression and excessive overcrowding in the shelter, about 3 percent to 8 percent of the animals are euthanized each year, she said.

Americans who breed their pets also contribute to pet overpopulation, Perez and Rouse both said.

The Kadena vet clinic has a no-breeding policy: It won&#8217;t treat pregnant animals. But, Perez said, &#8220;We know there are folks breeding their pets. Everyone wants to make the pet problem go away but we have to understand that we [the military] contributed to that problem.&#8221;

Perez and Rouse advise prospective pet owners to think long-term before adopting a pet about the day-to-day costs and responsibilities as well as the big costs when it is time to move again.

Summer air travel can be rough of Fido and Fluffy

Stateside airlines load pets last and take them off first, but if flights are delayed, pets could sit in a hold for a while over a tarmac that makes the cargo area extremely hot, she said.

The reduction in the number of Air Mobility Command flights out of Okinawa also means fewer spaces available for pets, she said.

The Air Mobility Command&#8217;s Patriot Express makes one flight a week from Okinawa, and transportation is available only for animals that weigh 100 pounds or less, including kennel, according to the command&#8217;s Web site.

They can send pets home via a commercial flight, go on leave before the summer heat embargo months and take their pets home then, schedule early or late flights to miss the heat or even schedule overnight layovers to accommodate heat restrictions, she said.

A list of commercial airline pet restrictions can be found at the Army&#8217;s District Veterinary Command Web site at http://www.usarj.army.mil/ organization/vet/c_trans.htm