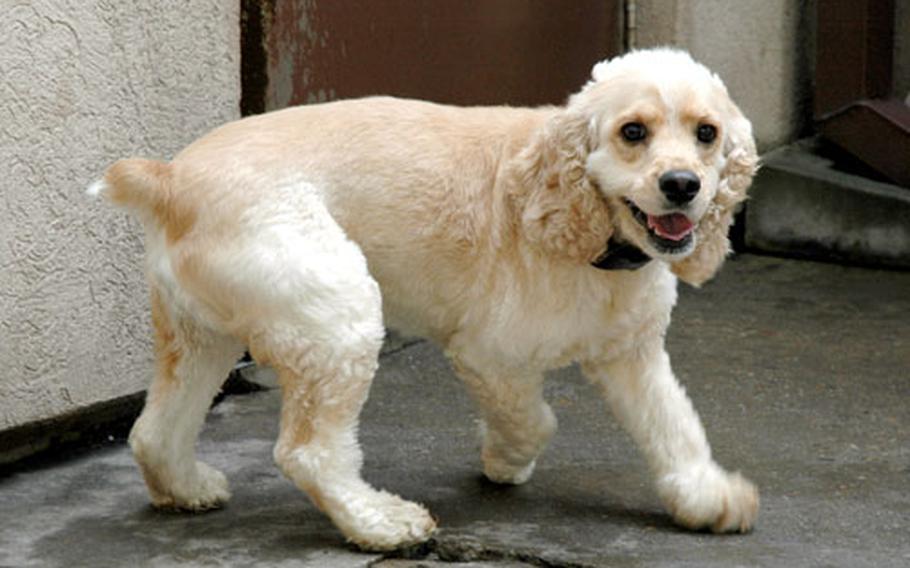 More than a dozen dogs and cats, all from military families, will be available for adoption Monday at the Yongsan Garrison veterinary clinic. (Teri Weaver / S&S)

YONGSAN GARRISON, South Korea &#8212; As military families leave South Korea each summer for new assignments, the numbers of dogs, cats, ferrets, rabbits and other pets in need of new homes always rises, according to the top veterinarian at Yongsan.

Some families turn their pets in to one of five clinics on the peninsula, giving healthy animals with good temperaments a chance at finding a new home, said Capt. Nic Cabano. Those pets are matched with new owners at various adoption fairs, such as one coming up Monday at Yongsan.

Yet some animals are abandoned, left wandering on bases for military police or maintenance workers to find, according to vet officials.

If a person is caught abandoning an animal, he or she can face punishment by commanders, Cabano said.

But matching a stray dog to a former owner can be hard if the dog hasn&#8217;t been &#8220;microchipped,&#8221; a procedure that inserts a computer chip the size of a rice grain under a pet&#8217;s skin. That chip contains information on the dog and the owner and can be read by vets worldwide, according to Cabano.

Right now, the vet corps encourages all animal owners to implant a chip in their pets, especially those 25 pounds or larger, according to military officials. Cabano said officials are working to make that recommendation a requirement to help keep track of pets and their owners.

Area II Support Activity commander Col. Ron Stephens said through a spokesman he would consider a mandatory policy, but none had been proposed as of late last week.

On Monday, more than a dozen dogs and cats will be available for adoption. All have come from other military families and are sociable, said Sgt. Julie Hicks, who also works at the clinic.

Usually, the clinic at Yongsan does not have to euthanize abandoned animals. But the dogs and cats are there on a space-available basis and some have been there all summer, Hicks and Cabano said.

Ready for a new pet?

A dog or cat can be a loving addition to a family, but veterinary officials offer a few things to think about before bringing a new animal home:

Consider owning a pet a long-term relationship that can last a decade or more but that requires daily attention. Some of the families who leave their pets behind in South Korea do so because of new duty assignments or the added cost of shipping an animal overseas. Others find the operational tempo of military life in South Korea leaves little time for care or companionship with a pet.

A dog or cat can cost a few hundred dollars a year in routine health checkups and food, not counting any medical emergencies that might arise. Over a lifetime, this can add up to more than $4,000. Be aware of the investment you&#8217;re making.

Children love animals, but fulfilling a child&#8217;s wish for a new puppy or kitten isn&#8217;t always the best choice for the pet, the child or the parents. Generally, it&#8217;s smart to wait until the child is at least 6 so he or she can help care for the animal.

Dogs and cats are allowed in family housing throughout South Korea, except at Hannam Village.

The veterinary clinic on Yongsan Garrison will have an adoption fair from 1 p.m. to 7 p.m. Monday.

More than a dozen dogs and cats will be available for new homes. All of the animals have been spayed or neutered, vaccinated, and implanted with microchips.

The adoption fee is $75, which helps cover the cost of the caring for the pet and preparing it for a new home. For more information, call DSN 738-5145.