Abandoned junk cars an unsightly headache for bases across Europe 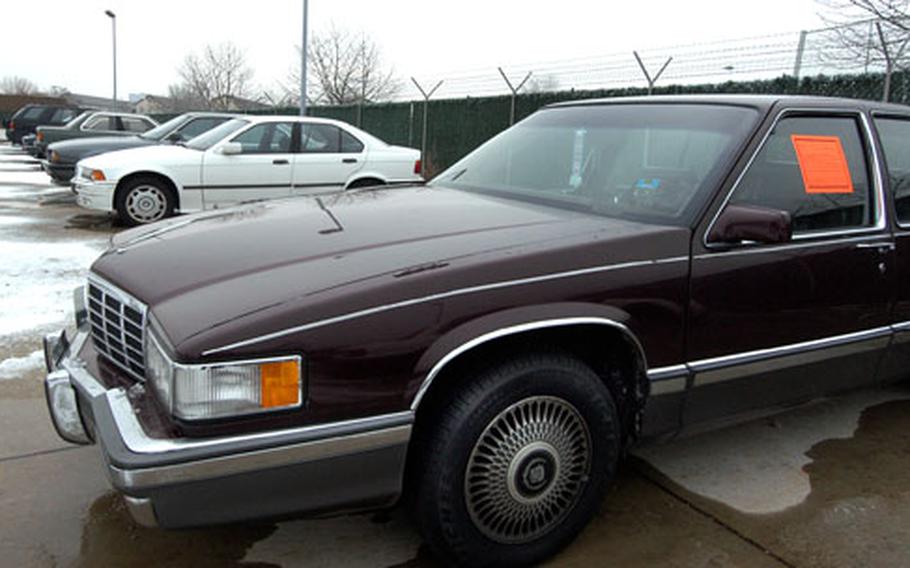 The 293rd Base Support Battalion’s “non-operating” POV lot at Sullivan Barracks in Mannheim, Germany. The car in the foreground is one of many abandoned vehicles. (Michael Abrams / S&S)

Even the most desperate car thief probably would pass on them.

Although U.S. servicemembers and civilian employees often bring their cars overseas, they don&#8217;t always take them when they leave, especially if they&#8217;re in no condition for the roads.

But instead of selling the vehicles or taking them to the junkyard, dozens have dumped them either on base or out in town. Some have been left in the small lot across the street from the naval station&#8217;s main gate.

While not all the abandoned vehicles have belonged to Americans, some have.

In the past year, Americans in Rota have abandoned 90 vehicles, forcing base officials to crack down on the auto eyesores and track down and charge the owners.

Many abandoned vehicles are in poor shape with corrosive batteries, loose parts, leaking fuel tanks and broken windows, posing a danger to motorists and pedestrians.

The closure of the Morale, Welfare and Recreation department&#8217;s junkyard on base has &#8220;compounded the problem,&#8221; Jacobson said.

The high price to dispose an imported vehicle in Spain also is a factor.

It can cost as much as $600 for a vehicle, depending on its condition.

However, the problem isn&#8217;t isolated to southern Spain.

Bases throughout Europe have had to deal with vehicles ditched by Americans and many have implemented strict rules and programs to reduce the number.

In Stuttgart, Germany, base commands are working together to keep the number down, according to spokeswoman Terri Alejandro.

In 2004, the 6th Area Support Group reported only 11 abandoned cars.

In Mannheim, Germany, the 293rd Base Support Battalion has taken steps to clean up a problem base officials considered an issue that reflected &#8220;negatively on morale and quality of life.&#8221;

A program implemented last year includes Mitchell Smith, the assistant installation coordinator, once or twice a week combing the bases in the community and looking for abandoned or unregistered vehicles.

If the vehicle is no good, they have the option of donating it to the Morale, Welfare and Recreation department and paying only $75.

In the past year, the number of abandoned vehicles has gone from more than 50 automobiles per year to 23, Smith said.

Tracking down the owner can be tricky, especially if he or she has transferred to another base.

Processing one abandoned vehicle can take 40 hours of work and can cost the base between $100 and $600 in Rota, Jacobson said.

So far, the aggressive campaign to reduce the number of abandoned cars in Rota seems to be working, Jacobson said.

Those that do not remove the car within 30 days face disciplinary action and could be court-martialed for &#8220;failure to obey order or regulation.&#8221; Civilian employees can lose their command sponsorship.