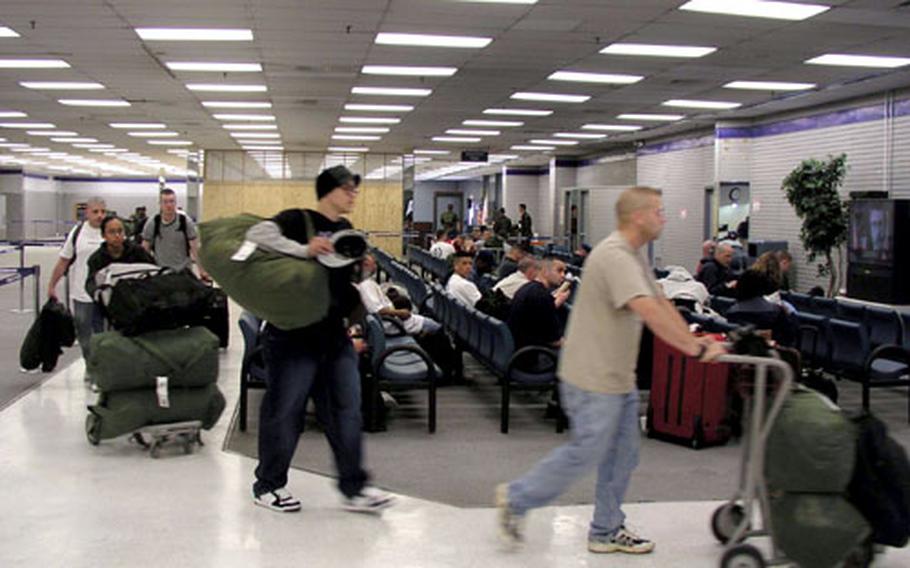 Servicemembers newly arrived for duty in South Korea make their way through the interim passenger terminal at Osan Air Base Thursday. Base officials recently took the vacant former base exchange building and transformed it into a bustling passenger terminal. (Franklin Fisher / S&S)

Servicemembers newly arrived for duty in South Korea make their way through the interim passenger terminal at Osan Air Base Thursday. Base officials recently took the vacant former base exchange building and transformed it into a bustling passenger terminal. (Franklin Fisher / S&S) 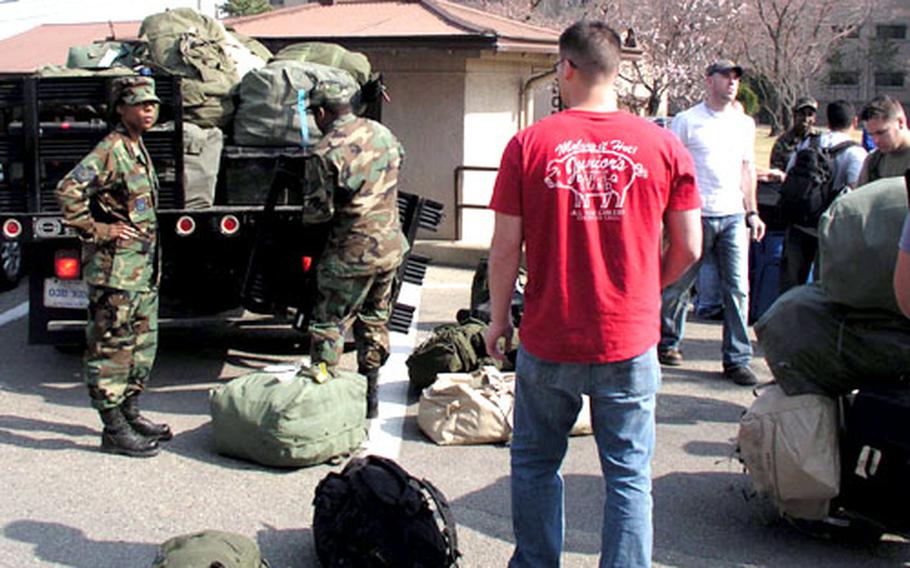 OSAN AIR BASE, South Korea &#8212; Before it shut its doors last fall to give way to a big new shopping mall, the building that housed the base exchange here had been one of the busiest spots on base.

Servicemembers and their families came by the hour to buy everything from sunglasses to sneakers, toothpaste to widescreen TVs. People waited for cabs at the taxi stand, and the adjoining food court always seemed crowded.

The former exchange complex soon took on the feel of a ghost town. Workers had gutted the building for eventual demolition and the parking lot lay empty. People who passed by were headed elsewhere.

But now the former BX complex once again is bustling.

Officials stopped using the regular terminal last month after several beams were found to be badly misshapen and engineers declared it structurally unsound.

Hundreds of airmen, including carpenters, electricians and plumbers, worked long hours to revive the old building. They restored lights, water, phones and computers. They painted, plastered, set up service counters and hung signs. By March 22 it processed its first planeload of new troops.

Its parking lot, silent all winter, now is crowded with buses. Some shuttle passengers to and from the flightline.

Others wait to take travel-weary troops in jeans and baseball caps to their new units around South Korea.

Work crews have repainted spaces for taxis and other authorized vehicles.

The terminal will relocate again this fall to allow demolition of the former BX, officials said. They have yet to decide on the next location, said Air Force Capt. Tom Strassberger, Aerial Port Flight commander with the 731st Air Mobility Squadron.

In recent weeks, two large, flat-screen TVs have been set up in waiting areas. Food and beverage vending machines have been carted in.

An X-ray machine and baggage conveyer belt have been moved over from the regular terminal.

Airmen meeting arriving aircraft give passengers a heads up.

Romy Kerstetter and Kristen Stone flew into Osan from Japan on Thursday. Both work at Seoul Middle School, Kerstetter as a librarian, Stone as a reading teacher.