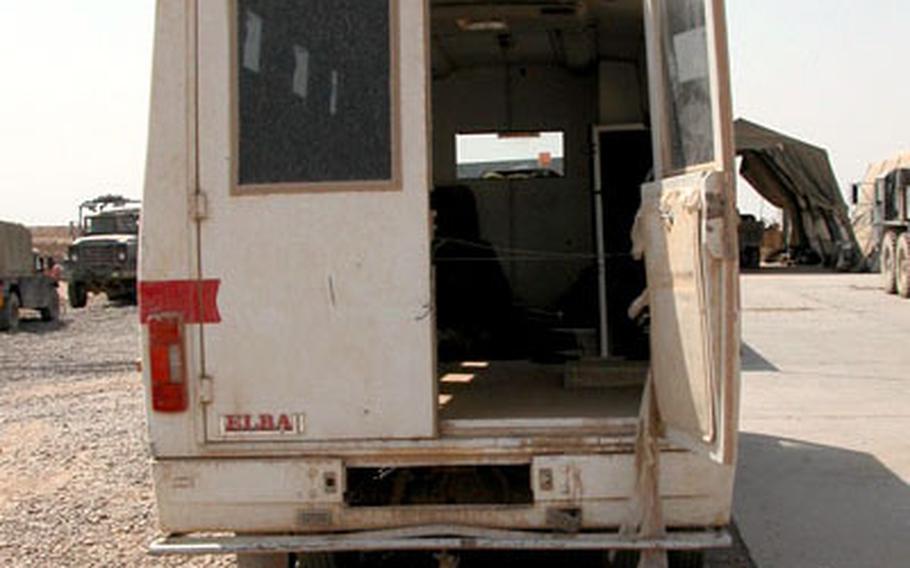 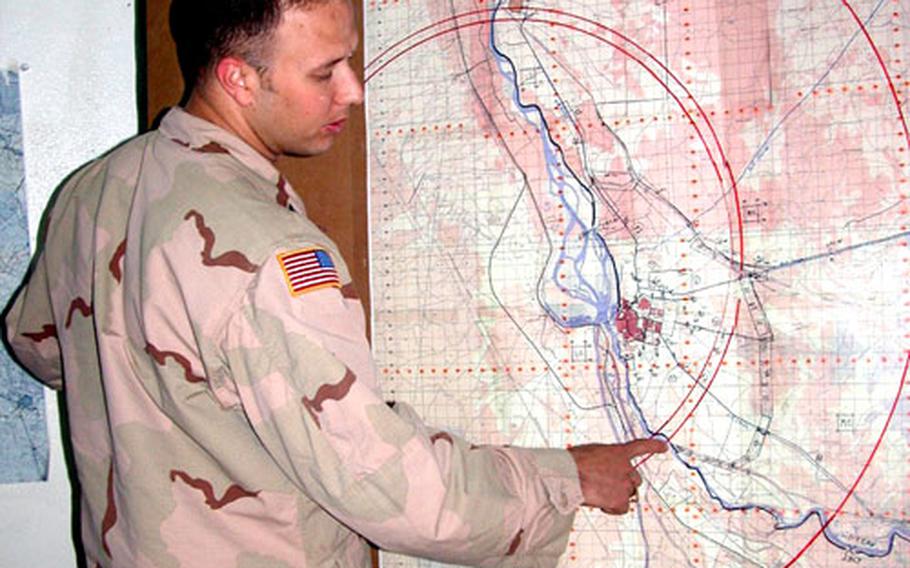 FOB McKENZIE, Iraq &#8212; The three Iraqi men might have thought the red-and-white bus would be their one-way ticket to paradise.

But the 1st Squadron, 4th U.S. Cavalry had a little surprise for the trio: Their bus would drive the suspected kingpins of a Samarra kidnapping ring not to paradise, but rather straight to detention.

Led by Staff Sgt. Grant Phillips of Utica, N.Y., troops from the Bulldawgs&#8217; 2nd and 4th platoons were looking for weapons caches north of the Tigris River.

Just one day before, the soldiers had found two carefully hidden &#8220;terrain tables&#8221;: crude models military members around the world use to plan attacks, according to Capt. Jamie Berry, who was the &#8220;battle captain&#8221; that day.

The scouts took pictures of the tables and took them to the 1-4 Cavalry&#8217;s Forward Operating Base McKenzie to be analyzed by intelligence experts.

The tables turned out to be models of Camp Anaconda and FOB Brassfield-Mora, Berry said.

So the next day, the soldiers scoured the area.

Hidden near the same access route were a medium-size bus, an ambulance and an orange-and-white taxi.

The vehicles were in revetments, which are like graves with no tops. The holes are especially easy to dig in a desert&#8217;s soft sand, and can be very tough to spot in the ever-shifting terrain.

Insurgents are notorious for using Iraqi taxis for suicide attacks. But the ambulance and the big bus were even more worrisome, Synowiez said.

The Geneva Conventions require that ambulances have freedom of movement, and insurgents have been known to take advantage of that by using the medical vehicles to smuggle weapons or get close to targets and explode them as car bombs.

And the sheer size of a bus made it a potential bomb of incredible lethality.

The &#8220;Bulldawg&#8221; scouts questioned local Iraqis. Where had these vehicles come from?

So 1-4 Cavalry leaders decided to confiscate the bus and the ambulance after checking for booby traps, hidden explosives and other nasty &#8220;surprises.&#8221;

They left the taxi, because abandoned vehicles of that size are found all over Iraq, so the threat was not worth towing the vehicle, the base spokesman and personnel officer, Capt. Nathan Springer of Oklahoma City, Okla., said Wednesday.

For the next four months, the ambulance and bus sat in McKenzie&#8217;s vehicle maintenance yard. The ambulance rusted quietly, but mechanics sometimes used the hollowed-out bus to haul parts.

The alleged owner had all the proper paperwork to show that the bus was, in fact, his. His story that the bus had been stolen &#8220;was plausible,&#8221; Synowiez said.

But to Synowiez, something felt wrong.

The Americans told the Iraqis to come back in a couple of days and Lee immediately began his search.

Low and behold, the names of all three men &#8220;hit: It turns out they were tied to a series of kidnappings in Samarra, and maybe even more than that,&#8221; Synowiez said, declining to elaborate.

So when the Iraqis came back for their bus on Sunday, they got a ticket to ride: straight to detention.

Asked why anyone involved in nefarious activities would just walk up to U.S. troops and ask for illicit property to be returned, both Synowiez and Berry shrugged.