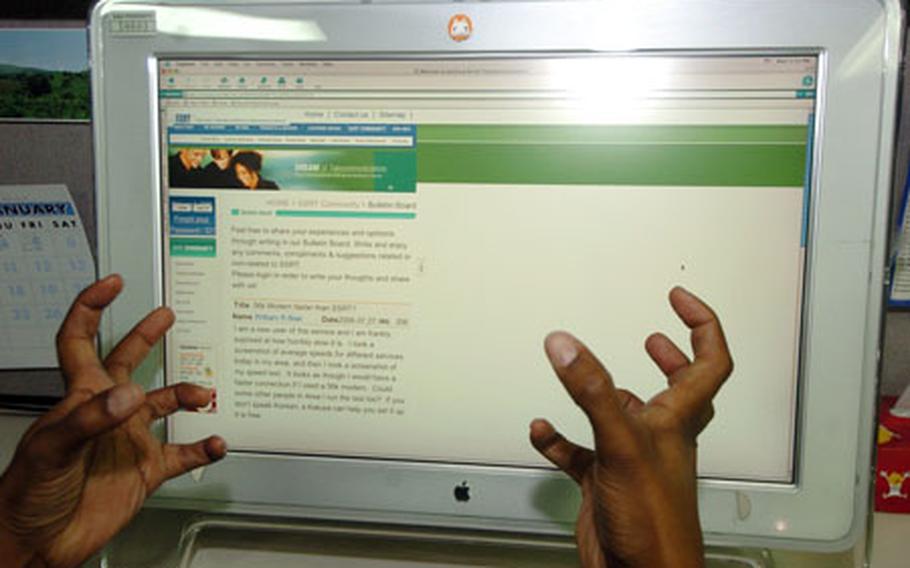 Air Force Col. Jorge S. Garza, director of loss prevention at AAFES&#8217; headquarters in Dallas , spoke to Stars and Stripes about the matter during a recent phone interview.

Jeong is awaiting trial in the case. His lawyers have said he is innocent.

Choy and Holloway declined to discuss the case when contacted by Stars and Stripes.

Garza said AAFES is awaiting the outcome of a U.S. Air Force Office of Special Investigations probe. That investigation, in cooperation with the Korean National Police, is in its final stage, OSI officials have said.

AAFES officials can use the investigation&#8217;s findings to better gauge what actions might be appropriate, Garza said.

&#8220;Once the commander and his senior staff get all the facts &#8230; they will look at the full spectrum of what we can do to make sure that our customers get what they deserve and the service they should have gotten,&#8221; Garza said.

&#8220;So I think our customers there in Korea can feel assured that we will do everything within our ability to ensure they get a fair shake, if that&#8217;s the right word, a resolution, to this particular situation,&#8221; he said.

Garza said Air Force Maj. Gen. Paul W. Essex, AAFES commander, &#8220;has given our general counsel the authority and the guidance to prosecute violators that have gone and broken our public trust and our customers&#8217; trust, and to prosecute them to the furthest extent.&#8221;

AAFES in 2001 awarded SSRT a $206 million contract to provide Internet and phone service to all military installations on the peninsula, according to South Korean authorities and former SSRT vice president Peter Jang. The contract was to run to 2011 and service was set up at 13 installations, including Osan and Kunsan air bases.

By May 2003, SSRT&#8217;s service had been the subject of growing complaints from military customers, irate over alleged price gouging and faulty service, Jang said. Despite the problems and complaints, in 2004 the contract was extended to 2019, he said.

&#8220;It&#8217;s unfortunate that it went this far and that it came to this point, but once the investigation is complete, we will look into it and try to find out where our internal controls broke down,&#8221; Garza said. &#8220;We have a customer that is not receiving the quality service that they deserve and for whatever reasons, it was not elevated to a level high enough for us to be able to go in and&#8221; address the issue.

OSI will forward its investigative report to the U.S. Attorney&#8217;s office to consider whether charges are warranted, agency officials have said.

Choy is services program manager at AAFES&#8217; Pacific headquarters on Camp Foster , Okinawa , a position he has held since February 2005 and also occupied from November 1995 to December 2003. Holloway is AAFES general manager at Fort Benning , Ga. , and was AAFES central exchange general manager at Osan Air Base, South Korea , from June 2000 through August 2005.

Who is affected?SSRT currently provides telecommunications service to the following installations, according to a company official: