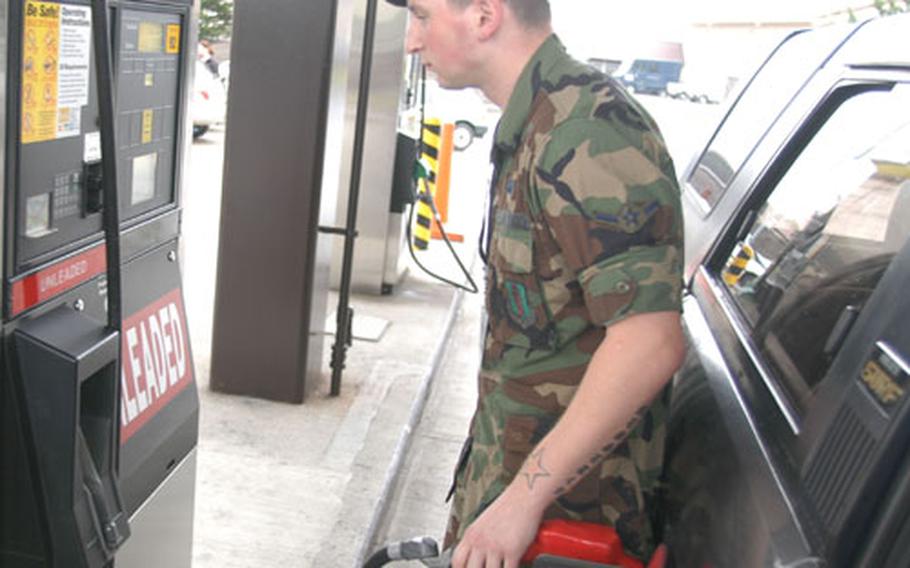 CAMP FOSTER, Okinawa &#8212; Base motorists in Japan and Okinawa soon will have to dig a bit deeper in their pockets to pay for a tank of gas.

Gas prices on military bases throughout Japan are about to reflect prices paid in the United States. The Army and Air Force Exchange service announced Friday that, beginning Oct. 1, it will adjust gas prices monthly based on the Department of Energy&#8217;s four-week averages at pumps in the United States.

That means the $1.64 paid at the pump at base exchanges in Japan will increase at least 20 cents. The average price of gas in the States in August was $1.83 per gallon of regular, according to the DOE.

&#8220;We understand that when the new prices come out, it&#8217;s going to be a shock,&#8221; said Sgt. 1st Class Amanda Glenn, a spokeswoman for AAFES Headquarters Pacific Region. &#8220;But we&#8217;re trying to mitigate that shock by continuing to give out the $2 discount coupons for eight gallons of gas or more, and we will raise the price of gas incrementally.&#8221;

The pricing change replaces the current policy for Japan and Okinawa, which set prices once a year on Oct. 1. The price AAFES pays for gasoline in Japan is based on an annual contract, Glenn said. In fiscal 2004 the price paid to the Defense Energy Supply Center for a gallon of gas was $1.02 per gallon. The price projected for the next fiscal year is $1.06, Glenn said.

Glenn said 67 percent of the profit made on gas sales goes to military MWR programs and 33 percent pays for operating expenses. Monthly gas sales for AAFES on Okinawa average 743,300 gallons, she said. The average for the rest of Japan is 291,700 gallons.

On Misawa Air Base in northern Japan, Airman Jeff Catan, a sheet metal mechanic with 35th Maintenance Squadron, welcomed the news that gas prices may fluctuate monthly. &#8220;Once a month would be good I guess,&#8221; he said. &#8220;If you&#8217;re not happy with the price, it will change every month. That&#8217;s better as opposed to waiting a whole year.&#8221;

Staff Sgt. Michael Norton also doesn&#8217;t worry about gas prices but said he might now if prices are to fluctuate monthly. &#8220;If they raise the prices, they should change the coupon,&#8221; he said.

Navy Petty Officer 1st Class Lauriano Gianan said the new policy &#8220;is going to mess things up, because the prices will go up. There&#8217;s nothing we can really do.&#8221;

It is the second time in three years AAFES has changed its gas-pricing policy in Japan. In May 2001 it was announced that operations in Japan would convert to the monthly pricing policy, but public outcry caused them to switch back to pricing gas based on the annual average price.

&#8220;The new policy brings prices more in line with stateside pricing practices,&#8221; Col. Michelle Gardner-Ince, AAFES Pacific Rim Region commander, stated in a news release Friday. &#8220;Prior to the implementation of this policy, only AAFES&#8217; gas prices in Okinawa, Japan, Turkey and the Azores were set for the entire year. &#8220;As a result, the downward swings in the market that reflected lower prices did not impact in these four areas,&#8221; she said.

According to the release, the AAFES military board of Directors approved the policy change in March.

&#8220;Synchronizing the gas policy will ensure that the price of gas at all overseas locations reflects the U.S. market price, month to month,&#8221; said AAFES Commander, Maj. Gen. Kathryn Frost, according to the release. &#8220;AAFES&#8217; objective is to offer pump prices that are consistent with the CONUS average regardless of where troops are stationed.&#8221;

But that does not mean gas prices will be the same through AAFES. The country-by-country prices fluctuate because incremental costs, such as labor and upkeep, are unique to each country, according to Gardner-Ince.

Gas prices at AAFES pumps on Guam are currently at $1.95 for unleaded regular. The price in South Korea is $1.93, according to Glenn. In Germany, normal unleaded is $2.05. In Britain, super unleaded is $2.08

Whatever the price in Japan and Okinawa, it will still be far less than what is paid on the local economy, Glenn said. On Friday regular gas at Okinawa gas stations cost about $3.80 a gallon.

Navy Exchange officials in Japan said Friday they were not aware of any plans to change their policy of setting annual gas prices. &#8220;I have received no guidance that we&#8217;re changing anything here,&#8221; said Jerry McMahan, district services operation manager for NEX at Yokosuka Naval Base.

Kristine Sturkie, spokeswoman for the Navy Exchange Services command in Virginia Beach, Va., said the command would stick to its yearly pricing policy in Japan, Keflavic, Iceland, and at Guantanamo Bay, Cuba. She said NEX has not determined what gas prices will be when they are set Oct. 1.

In Japan, NEX sells mid-grade unleaded gasoline for $1.42 a gallon. In Britain, Sturkie said, NEX makes monthly price adjustments and matches AAFES&#8217; price, which currently is at $2.08 per gallon for super unleaded.