More than 100 Worldcup Arirang Tourism Ltd. drivers protested on Saturday at the War Memorial outside of Yongsan Garrison. The drivers were informed on Saturday that if they don’t return to work by Monday they face the possibility of being banned from working for any current or future AAFES contractor. (Teri Weaver / S&S)

More than 100 Worldcup Arirang Tourism Ltd. drivers protested on Saturday at the War Memorial outside of Yongsan Garrison. The drivers were informed on Saturday that if they don’t return to work by Monday they face the possibility of being banned from working for any current or future AAFES contractor. (Teri Weaver / S&S) 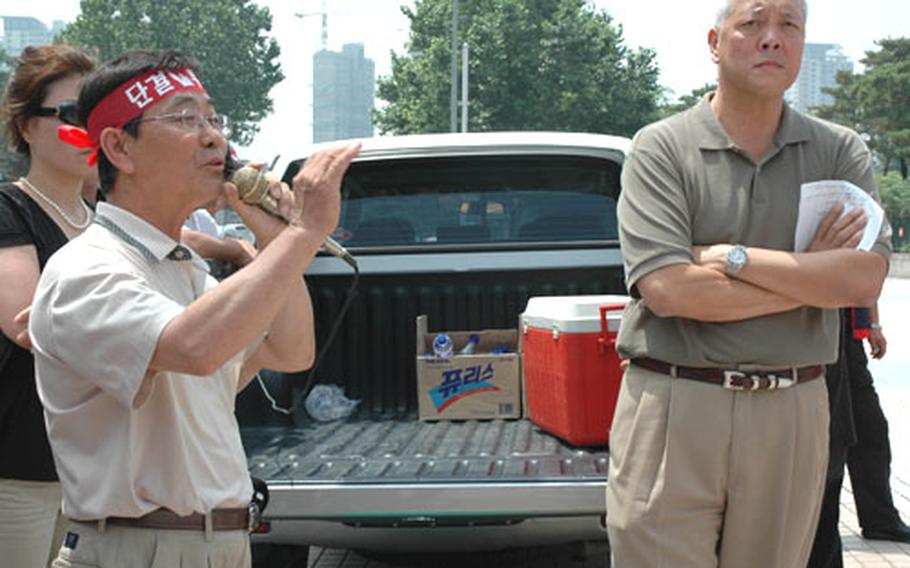 Bae Sam-jin, an Arirang taxi driver for 15 years, tries to calm more than 100 protesting drivers Saturday afternoon after hearing from AAFES Pacific Services Manager Cliff Choy, right, that AAFES can bar the drivers from current and future employment on any contracts with the exchange service. (Teri Weaver / S&S)

SEOUL &#8212; Worldcup Arirang Taxi Co. drivers have until Monday to return to work or face being banned as an employee for any current or future contractor with the Army and Air Force Exchange Service, said union and AAFES officials.

Cliff Choy, AAFES Pacific services manager, Saturday told more than 100 protesting drivers the exchange can end working privileges for individuals via a &#8220;17-I letter&#8221; citing a worker for unacceptable performance.

Choy said AAFES is not taking sides between Arirang, the South Korean taxi company with a contract to provide on-base cabs in Area I and Area II, and the union&#8217;s 270 members, who began their strike July 14.

Yet strikers said Saturday they see Choy&#8217;s statements as a threat to their jobs and a sign AAFES is taking the taxi company&#8217;s side.

AAFES is responsible to provide service to U.S. Forces Korea personnel, Choy told the drivers. Already, AAFES has sent Arirang two warning letters, giving the company until Monday to take action to restore service, he and other AAFES officials said.

His words drew heated comments from several members and ended his statements to the group. Union leaders agreed to meet with him privately while union members continued a planned rally and march to Arirang&#8217;s office.

After more than two hours, the leaders emerged from the meeting frustrated.

Choy was not available for comment after the meeting.

The union is at odds with Arirang over a requested $105 monthly raise. On Saturday, some drivers said Arirang also wants to raise the daily quota each driver must make in receipts.

Each driver now must make $87 in fares during a 13-hour shift before splitting fare earnings evenly with the company. Drivers on Saturday said the company wants to raise that to $125.

But on Wednesday, Choi Byeong-sik, an Arirang Dongducheon office manager, said the company cannot afford any raise and contended the strike is jeopardizing jobs for everyone at the company.

Drivers on Saturday again offered apologies to USFK personnel and family members for the lack of taxi service.

In Area I, military officials contracted with another South Korean taxi company to provide some service. On Thursday in Area II, 18 Arirang drivers returned to work. On Saturday, one other Yongsan-based driver joined the small fleet, union officials said.

Union leaders Saturday said they would take Choy&#8217;s information to their membership, possibly to make a decision Sunday.