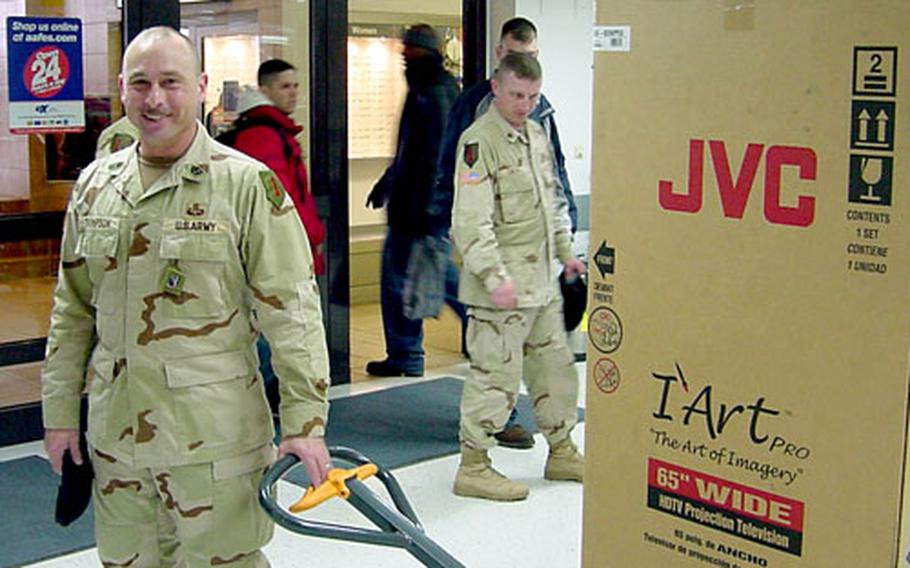 A soldier walks away with the 65-inch wide-screen TV he purchased at the Schweinfurt Power Zone on Friday. Army and Air Force Exchange Service-Europe has stocked up on popular items to gear up for the 1st Infantry Division’s return from Iraq. (Courtesy of AAFES)

After a year of decreased sales at many of its stores in 1st Infantry Division communities, the Army and Air Force Exchange Service is oiling up its cash registers.

In anticipation of the return this month and next of thousands of soldiers with money to burn, the W&#252;rzburg Consolidated Exchange has ordered more than $6.5 million worth of additional items, according to Robert Koch, retail business manager for the consolidated exchange.

About $4 million of that merchandise is electronics &#8212; popular items for returning troops, he said.

Additional stock is also on the shelves at the Vilseck Post Exchange in preparation for the return of the 3rd Brigade Combat Team there, said Matt Mennona, general manager for the Grafenw&#246;hr Consolidated Exchange.

AAFES representatives met in October to discuss what should be happening at AAFES stores in preparation for the return.

&#8220;We sat down and looked at what we needed to do to prepare,&#8221; said Koch, whose consolidated exchange covers Bamberg, Giebelstadt, Kitzingen, Schweinfurt and W&#252;rzburg. &#8220;We started ordering merchandise in December to hit the stores in early February.

&#8220;We talked to our counterparts in the 1st Armored Division to see what soldiers in those communities wanted when they returned. We all have a lot of experience in knowing what soldiers are looking for.&#8221;

With shelves stocked, AAFES has addressed the challenge of having a staff large enough to handle the rush of returning soldiers.

&#8220;Some of the challenges will be to keep the floor stocked, but another will be that most of our employees are family members,&#8221; Koch said.

&#8220;When their husbands or wives come home, they are going to want to go on block leave with them, rightfully so. We will do all we can to allow them to spend time with their returning soldiers.&#8221;

One solution involved bringing in employees from other areas to help out. About 10 have already arrived and are spread throughout 1st ID communities. Up to 15 more are expected this week.

Many of the AAFES stores were renovated while the soldiers deployed, and some communities have new restaurants, which have ordered extra food from the warehouse near Ramstein.

&#8220;In the entire community, there&#8217;s a certain amount of electricity when you see all the signs and posters welcoming our soldiers home,&#8221; he said.

&#8220;We all look forward to their return, and [AAFES] will bend over backward to take care of their needs."

The W&#252;rzburg Consolidated Exchange has ordered $6.5 million worth of merchandise to prepare for the 1st Infantry Division&#8217;s return from Iraq. Sales are already on the rise. Here are the average two-week sales figures, and sales since Feb. 1 for selected items: