AAFES store at Yongsan will track all alcohol, vitamin sales 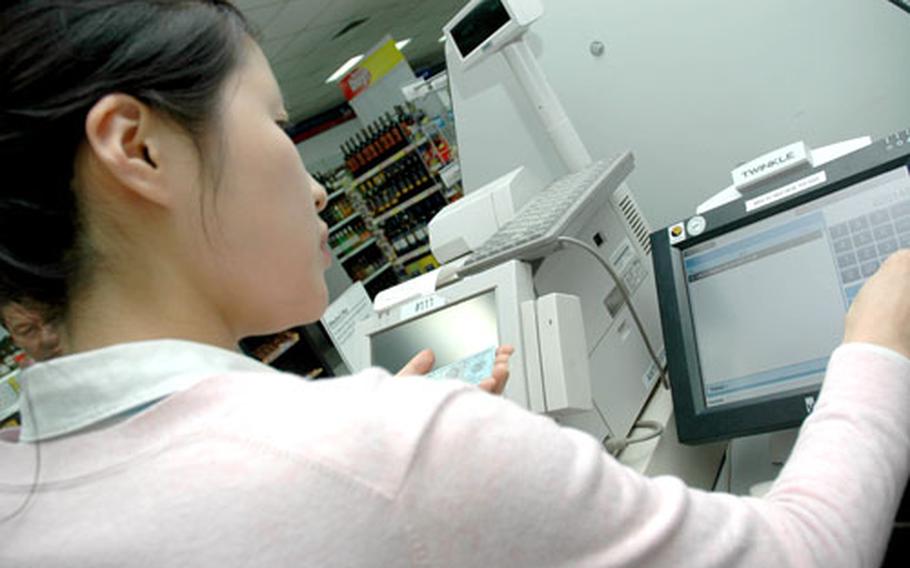 A cashier at the AAFES Shopette on South Post of Yongsan Garrison enters information Tuesday afternoon for a customer buying a fifth of whiskey. This month, AAFES and U.S. Forces Korea officials will track beer, liquor and vitamin purchases electronically at the shop. (Teri Weaver / S&S)

USFK and AAFES will use these two stand-alone mobile units to test the new computer software&#8217;s ability to collect sales information on different items at stores on Yongsan, according to Paul Stenseth, AAFES manager for South Korea and Japan stores.

For customers, the computerized scanners should make check-out quicker: Cashiers need only swipe an identification card, not hand-write a receipt, for alcohol purchases. For officials, the change means shopping data can be analyzed weekly instead of every three months.

Beer and liquor sales now are tracked with a paper-based system, he said, adding that writing, collecting and inputting the information usually takes up to three months from purchase to review.

On-base shoppers are limited to two cases of beer a day or eight cases each month. Liquor sales are limited to three bottles per month for single people and five for families. But no system prevents a shopper from buying his or her limit several times a day at different stores, officials admit.

This new system won&#8217;t stop that either, at least for now, McCarthy said Tuesday. But, he said, it will give military and South Korean customs investigators a better start at pinpointing who might be black-marketing American-brand products.

U.S. Forces Korea officials recently have stepped up cooperation with South Korean customs to combat black marketing. In 2005, U.S. officials began developing technology to track sales at commissaries in South Korea almost at once. That same analysis will be used with the two electronic units at AAFES, McCarthy said this week.

In the past, tracking AAFES sales has been difficult. AAFES has no computer tracking system that matches purchases to the buyer and cashier, Stenseth said.

Within two years, AAFES hopes to have a system that does that at all its stores worldwide, he said.

In the interim, USFK decided to spend $5,000 on the two stand-alone tracking units. McCarthy said if they succeed, he&#8217;ll then have to argue for a larger budget for more devices. Eventually, he said, he hopes to create a computer network that actually will stop purchases at the cash register if a customer already has met his or her monthly limit.

Stenseth said AAFES continues to rely on its workers to spot suspicious purchases.