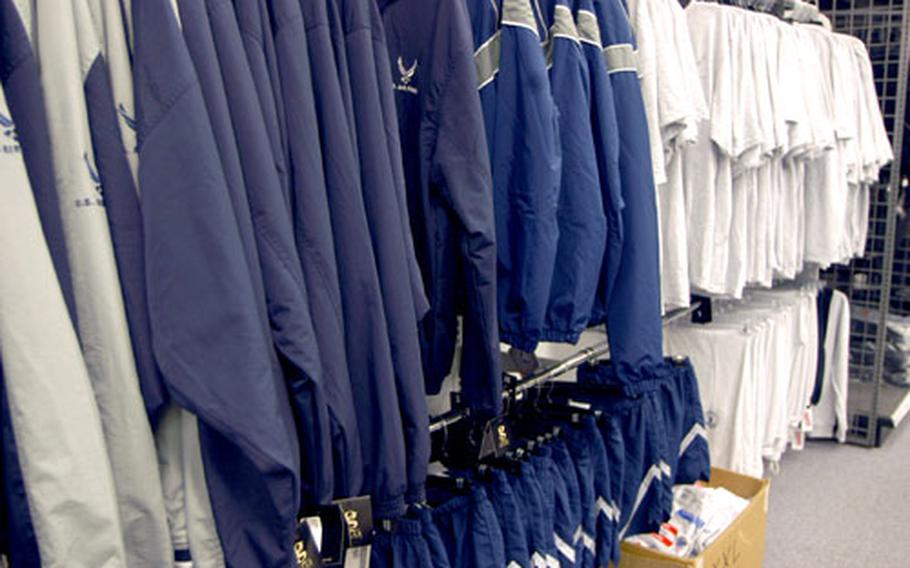 Physical training clothes line the racks of the Exchange on Yokota Air Base, Japan, on Wednesday. (Christopher B. Stoltz / S&S)

YOKOTA AIR BASE, Japan &#8212; The Army and Air Force Exchange Service is stockpiling the Air Force&#8217;s new physical training uniform to meet the late crush of servicemembers looking for the gear before next month&#8217;s wear deadline.

Supplies had dwindled in military clothing sales stores across the Pacific due to high demand but they&#8217;re being boosted now by additional air shipments, according to Air Force Master Sgt. Donovan Potter, a spokesman at AAFES Pacific Region&#8217;s headquarters on Okinawa.

&#8220;New shipments are arriving often and we have taken measures to meet the needs of airmen as they comply with the Oct. 1 mandatory wear date,&#8221; he said Thursday. &#8220;The air shipments that we have requested are arriving in five to 10 days &#8230; with larger emergency shipments arriving by mid-September. We expect no problems serving our customers&#8217; needs and keeping up with demand.&#8221;

Concerned they might not be able to guarantee shipment before Oct. 1, AAFES officials at Yokota were encouraging customers to order through the organization&#8217;s Web site at www.aafes.com to ensure delivery.

Larry Salgado, the Yokota and Camp Fuji exchange general manager, said Thursday receiving the PT gear when ordering online takes about two weeks, though some people get their purchases in a week. &#8220;It really depends on the speed of the military postal service, which does a great job getting packages to our AAFES customers,&#8221; Salgado said.

According to Air Force Link, the branch&#8217;s official Web site, the new uniform consists of a T-shirt, a pair of shorts and a two-piece nylon running suit. Except for the grey T-shirt, the entire ensemble is navy blue and costs about $125. It was designed with comfort and safety in mind, officials said. Previously, the Air Force had no official PT uniform, though some squadrons had a dress code guiding their airmen.

&#8220;My squadron on Kadena is requiring all the members to have one set of shorts and T-shirt,&#8221; Potter said. &#8220;Others, especially in colder weather, may require the warm-up pants and jacket. It is really up to the specific military commands as to which components are required for their members.&#8221;

The T-shirt is $6.40 and the shorts sell for $11.15 at AAFES military clothing sales outlets, Salgado said. Beginning in October, enlisted airmen will receive an increase in their annual clothing allowance to purchase the uniform, according to Air Force Link. Those in basic training will be issued the gear but officers will be required to buy the uniform with their own funds.