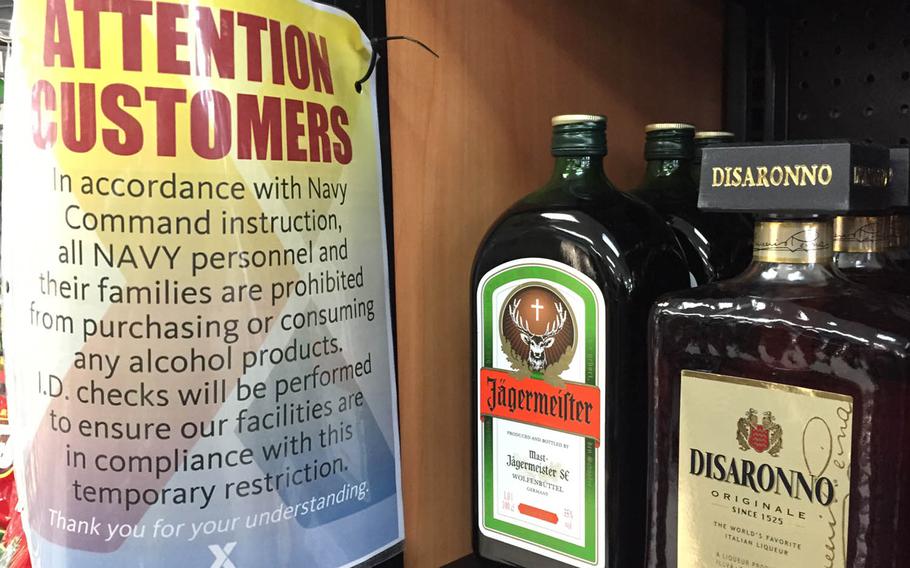 A sign seen Thursday, June 16, 2016, at an Army and Air Force Exchange Service shop at Yokota Air Base, Japan, says "all Navy personnel and their families are prohibited from purchasing or consuming any alcohol products." (Aaron Kidd/Stars and Stripes)

YOKOTA AIR BASE, Japan — The Army and Air Force Exchange Service says it has taken down signs at stores in Japan that wrongly barred Navy servicemembers’ families from buying alcohol.

The signs state that “all Navy personnel and their families are prohibited from purchasing or consuming any alcohol products.”

However, AAFES spokesman Chris Ward said in an email Thursday the signs were incorrect and had been removed, though some were seen in a shop at Yokota Air Base in western Tokyo that afternoon.

“In light of the current climate, the Exchange elected to err on the side of caution regarding the alcohol sales signs,” Ward said. “The signs have since been removed since the instruction does not apply to dependents.”

Last week, the Navy restricted most sailors in Japan to their bases and ordered that they refrain from drinking alcohol following a spate of high-profile arrests of Americans connected to the U.S. military.

Aimee Mejia, 21, a Navy petty officer second class assigned to Kadena Air Base, Okinawa, was arrested June 5 on suspicion of drunken driving after causing two vehicle accidents and injuring two passengers by driving the wrong way on an Okinawa highway. Seaman Apprentice Justin Castellanos, 24, a corpsman assigned to Camp Schwab, pleaded guilty May 27 to raping an intoxicated woman at a Naha hotel in March.

Navy Exchange stores in Japan responded to the restrictions by roping off areas where beer and liquor is displayed and halting all alcohol sales.

Liberty restrictions were lifted Friday, though sailors in Japan are now required to file daily off-base activity plans, or one activity plan covering the weekend.

The alcohol ban, which remains in place, applies to sailors stationed in Japan and those arriving on temporary duty. It excludes civilians, contractors, family members and personnel from other services stationed at Navy bases; however, Navy officials have requested that they take the order into account.

AAFES continues to sell alcohol in Japan, but requires that customers show identification to prove they are not sailors.