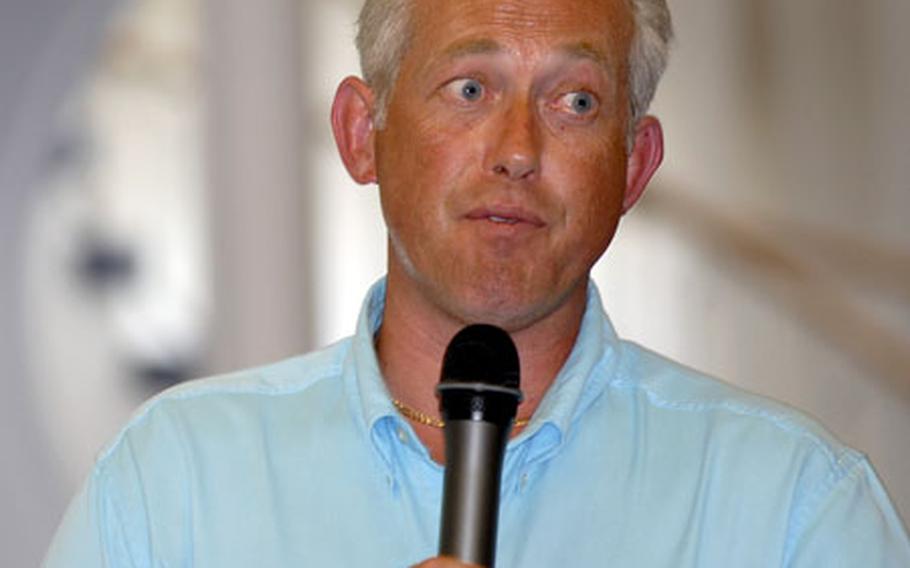 VOGELWEH, Germany &#8212; Not everyone is applauding the opening of the Kaiserslautern Military Community Center.

Two days before the first phase of the facility opens Thursday, senior Army leaders made it known they were not happy with the Army and Air Force Exchange Service&#8217;s plans to consolidate a number of its Vogelweh stores into the KMCC at Ramstein Air Base, about a 10- to 15-minute drive from Vogelweh.

AAFES plans to close the BX, BXtra, and the food court on Vogelweh, and move those stores to the massive shopping and entertainment facility on Ramstein starting next month.

Other issues were on the agenda, but the upcoming opening of the 844,000-square-foot complex sparked the most discussion &#8212; and criticism.

Most vocal was Army Sgt. Maj. David Wood, 21st TSC command sergeant major. He questioned &#8220;putting a lot of assets into Ramstein,&#8221; when a majority of Army soldiers and families, from Panzer Kaserne to Rhine Ordnance Barracks, live closer to Vogelweh.

Gross reminded Army officials that the site for the KMCC was selected years ago.

It may have been a good idea then, countered Wood, but it doesn&#8217;t make sense now with the size of the military community on and around Vogelweh.

According to the Army, as of February this year, some 12,600 Army members, civilians and their families were in Kaiserslautern. Most of those servicemembers work on facilities east of Vogelweh.

To fill the hole in services left by the BX closure, the Pulaski shoppette will be converted into &#8220;a small, modular BX&#8221; stocked with basic household necessities, Gross said. The store&#8217;s inventory will be expanded by Sept. 14, when the Vogelweh base exchange, BXtra and food court are projected to close, one day prior to the scheduled opening of the KMCC base exchange.

To Army leaders, he offered to sit down with families of their choosing to take suggestions on items they&#8217;d like to see sold in the shoppette.

Air Force spouse and Vogelweh resident Ivalee Fiegl doesn&#8217;t mind shopping on Ramstein. Her biggest concern is where her husband and other military personnel working on Vogelweh can grab a quick, weekday lunch after the food court closes.

Soldiers from nearby Rhine Ordnance Barracks also use the food court, as do servicemembers attending the NCO Academy on Kapaun, she said. &#8220;It&#8217;s full. You&#8217;re going to have a major problem. I worry about my husband not eating.&#8221;

Eight eateries &#8220;all within about 400 yards&#8221; will remain at Vogelweh, though not all belong to AAFES, Gross said, naming Subway, Burger King and Popeyes as examples of continued fast-food options.

Vogelweh base officials said Armstrong&#8217;s can &#8220;deliver pizza to your office,&#8221; and hours at the Kids&#8217; Zone on Pulaski Barracks will be expanded, with a daily lunch menu made available.

Gross said he believes people won&#8217;t be disappointed after the KMCC base exchange opens, as it will be a facility more than double the size of the Ramstein and Vogelweh exchanges combined, and the largest military exchange in the world.

But while more Americans in the Kaiserslautern area will have to shop for clothes, furniture, jewelry and other merchandise on Ramstein, Vogelweh in the near future may be the best destination for groceries.

The Defense Commissary Agency Europe has plans to renovate and add on to the Ramstein commissary, Scott Vincent, 435th Civil Engineer Squadron program flight chief, announced at the town hall. The project will increase square footage of the oft-crowded commissary, but the trade-off is eight months of shopping in a tent, Vincent said. He encouraged shoppers to use the Vogelweh commissary during the construction period.

DeCA Europe officials confirmed Wednesday that a major renovation of the Ramstein commissary is in the design stage. Built in 1983, Europe&#8217;s busiest commissary is not up to modern standards and needs to provide more efficient service to customers, officials said. The plan, however, has not received congressional approval. If approved, renovation would begin in 2010 and cost between $39 million and $49 million.

Officials also said a hard-side tent could be erected on site to house the commissary during construction, but no decision on that process has been reached.