AAFES plans to cut back on its layaway options 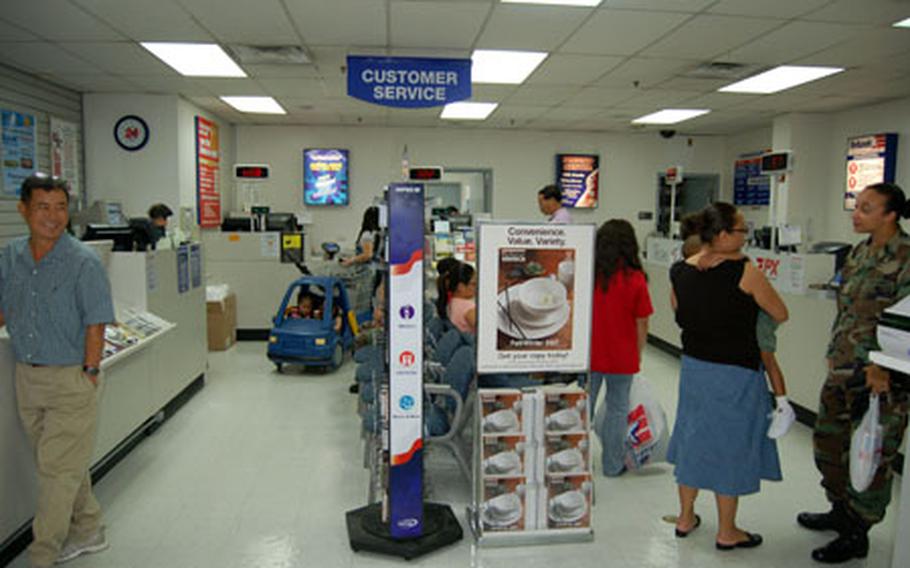 Army and Air Force Exchange Service customers wait in the customer service section of the Yongsan Garrison store on Wednesday. AAFES officials confirmed this week that they reduced layaway options, saying the program wasn’t cost effective; they didn’t have enough storage space; the items were often damaged while in storage; and usage has declined with more customers preferring to use credit. (Jimmy Norris / S&S)

SEOUL, South Korea &#8212; The Army and Air Force Exchange Service confirmed this week that it has reduced layaway options because the program wasn&#8217;t cost effective, and customer usage has declined the past five years.

Previously, AAFES stores would hold items in the warehouse and give customers up to 120 days to pay for them interest-free.

Pacific AAFES spokesman Master Sgt. Donovan Potter, based in Okinawa, said layaway usage has declined and that customers favor using credit. He said a lack of storage space and the potential for damage to warehoused items also contributed to the decision.

Potter said AAFES is encouraging customers to use their Military Star Cards and the Take it Home Today program, instead of layaway.

According to AAFES policy, the program can include items that accompany large items &#8212; such as sound systems for televisions &#8212; but items must cost at least $299.

Kimberly Wilson, an AAFES customer in South Korea, said she uses layaway before the school year and for Christmas. She thinks limiting the new policy is a bad idea.

Shopper Shari Arnesson said she thought that layaway would be convenient when living in a small apartment in South Korea. &#8220;Where are you going to hide things?&#8221; she said of her Christmas shopping. &#8220;To me, layaway always meant it was hidden.&#8221;