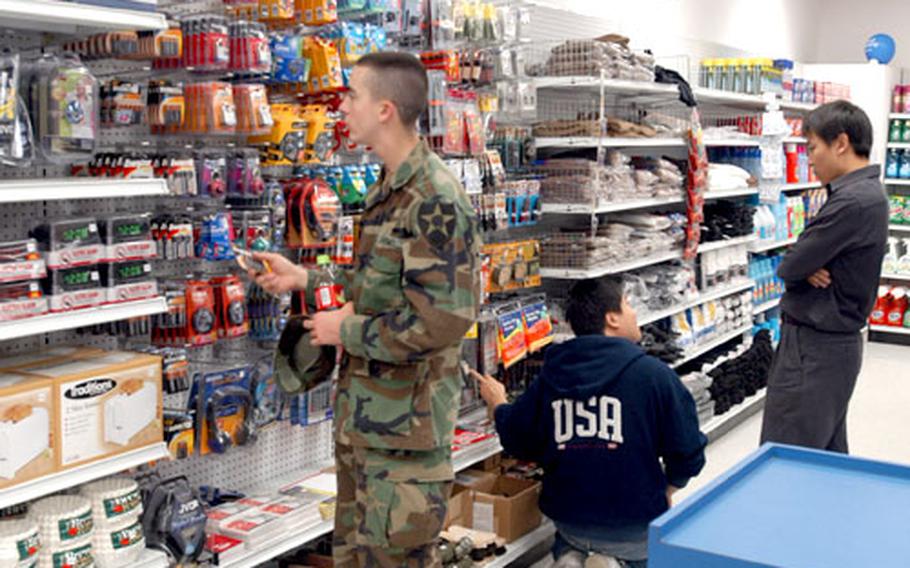 The PX, which opened Nov. 22, already is a hit with soldiers at the live-fire complex where the U.S. military trains just south of the Demilitarized Zone separating North and South Korea.

With the PX, soldiers will be able to buy items they used to run out of when at the range for more than a few weeks, said Magill, who&#8217;d been there two weeks and was scheduled to stay two more.

&#8220;Before, you had to ask to go back to Camp Casey to get supplies,&#8221; said Magill, who has been buying Pepsi and chips from the convenience store.

Limbach said the ATM also would come in handy.

&#8220;We have the chance to get some money instead of putting a bill on Ma,&#8221; he said, referring to the tabs that South Korean vendors provide for soldiers, who make good on their debts come payday.

Another Company E soldier loitering outside the PX, Pfc. Kyle Fay, 19, of Jackson, Mich., was just as enthusiastic about the new facility.

AAFES headquarters did not respond this week to an interview request made through Area I public affairs officials.

However, AAFES Area I general manager Ronald Daugherty said in July that the PX was to replace a trailer operation, similar to what AAFES would set up in the initial phases of a war, that used to service the range.

A challenge for AAFES will be dealing with large influxes of soldiers at the range during training exercises, Daugherty said. Training groups range from 100 soldiers in a company to about 4,000 in a brigade. Staff numbers at the PX would increase when large numbers of soldiers are to train at the range, he said.