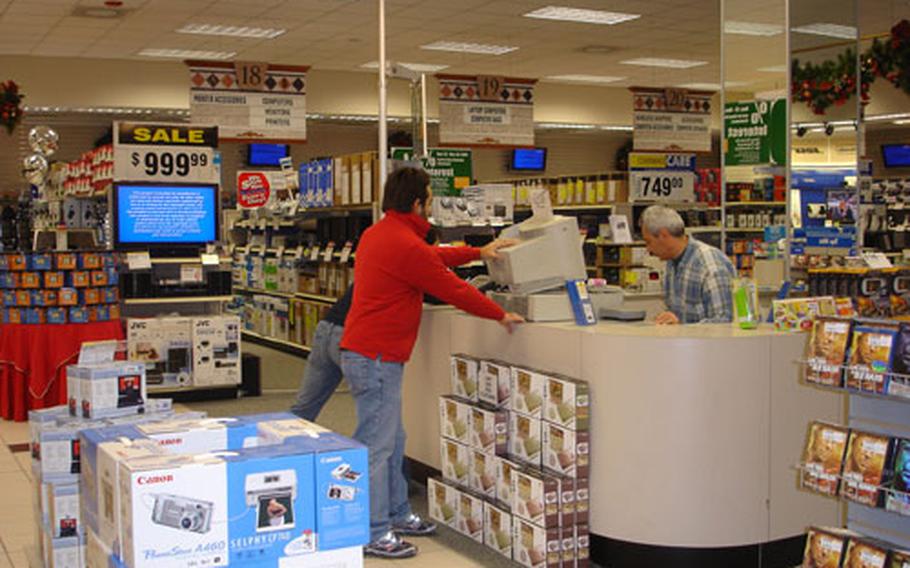 Workers at the Navy Exchange in Naples make last-minute preparations for the hundreds of customers that filed into the store for the start of the holiday shopping season. (Lisa M. Novak / S&S)

Shoppers &#8212; eager to snatch up deals and to get their hands on limited quantities of hot holiday items &#8212; lined up as early as midnight Thursday in some places.

Navy Exchange Europe brought in more than $3 million in sales from Friday through Sunday, an increase of 34 percent from a year ago, according to Christina Giordano, general manager of the NEX Naples Complex.

Sales at the new AAFES mall in Grafenw&#246;hr from Thursday through Sunday were up 44 percent over last year, despite the fact the major Army unit in the area is deployed, Konop said. And the AAFES main store in Bamberg smashed its one-day sales record of $95,000 by moving $140,906 worth of merchandise &#8212; an increase of 47 percent, according to Konop.

At the NEX in Naples, Italy, shelves were stripped of promotional laptops, holiday giftware items and Nintendo Wii systems, which have been hard to find in the U.S. and at exchange stores, Giordano wrote in an e-mail response to Stripes.

Even in places where there were fewer customers, the cash registers were still ringing.

The customer count was down at Lakenheath, England, from 9,987 a year ago to 8,840 who passed through the registers at the main exchange from Friday through Sunday. Nonetheless, sales were up.

The Lakenheath exchange opened Friday with some 300 customers standing at the door, and everyone had a story, he said.

Giordano expects sales at the NEX to remain strong through Christmas because of the weak dollar. Upcoming promotions should also help, she wrote.

The exchanges&#8217; performance was similar to, or better than, sales increases in the U.S.

According to ShopperTrak RCT Corp., which tracks sales at more than 50,000 retail outlets in the U.S., total U.S. sales rose 8.3 percent to about $10.3 billion on Friday, compared with $9.5 billion on the same day a year ago, The Associated Press reported. ShopperTrak had expected an increase of no more than 4 percent to 5 percent.