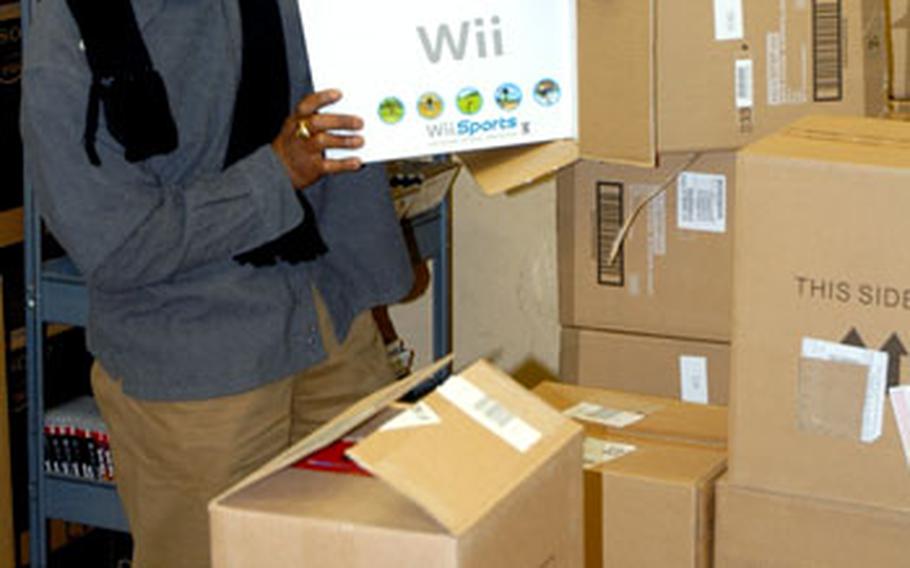 Dwight Johnson, a 10-year Army and Air Force Exchange Service supervisor in Bamberg, Germany, unloads dozens of popular Nintendo Wii video game consoles on Tuesday. Johnson, like hundreds of other AAFES employees throughout Europe, has been busily preparing for the droves of holiday shoppers expected on "Black" Friday, the biggest shopping day of the year. (Mark St.Clair / S&S)

The day after Thanksgiving, dubbed "Black Friday" by stateside retailers, is one of the busiest shopping day of the year, and Army and Air Force Exchange Service stores are no exception.

Special promotions and sales could mean big lines for on-base shoppers throughout Europe.

To keep things busy, AAFES is giving the first 100 shoppers at each exchange a $20 gift card on Friday. Other deals and specials on flat screen televisions, clothing, notebook computers and jewelry will be featured throughout the weekend.

Scratch tickets will be handed to afternoon shoppers from 4 p.m. until the doors shut, with chances to win a $100 gift card, among other prizes. Also, five people will win gas for a year, valued at $3,000, by entering special drawings, according to an AAFES news release.

While many of the specials and promotions throughout Europe will be featured at every store, individual locations will offer extras. In Bamberg, Germany, doors will open at 7 a.m. with hot chocolate available for early risers.

Also available for those first in line will be tickets for purchasing some specially discounted items, as stock is extremely limited, said Jenny Ring, Bamberg&#8217;s AAFES operations manager.

Though the economy has suffered recently, AAFES shoppers should be able to stretch their dollars through the weekend, officials say.

"Although the fourth quarter is looking very challenging for retailers, [exchanges are] going to be ready with great assortments and prices, both in our stores and online," said Maggie Burgess, AAFES senior sales vice president, in the release.

For local weekend operating hours and special promotions, customers can log onto www.aafes.com and use the store locator link provided.